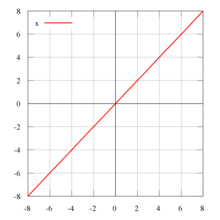 Graph of the identical mapping on the real numbers

An identical mapping or identity in mathematics is a function that returns exactly its argument. Although both the identical map and the identity equation are often abbreviated to “identity”, they are different things.

Let be a set , then the identical mapping to is defined by

that is, for each of true

The identical image is thus a bijection . The index is often omitted when the definition set is evident from the context. In this case there is also written instead . Instead of the notation , the notation is sometimes used , sometimes only or mainly in functional analysis . The graph of the identical figure is the diagonal

If there is any function, then the following applies to the composition (execution) with the identity:

The identity on the set of natural numbers is a multiplicative function that is considered in number theory .

The matrix multiplication with the identity matrix (neutral element) is an identity mapping. In linear algebra , base change matrices can be understood as representation matrices of the identical mapping with respect to two different bases .

The existence of identities is an integral part of the definition of the category . In the best-known cases, these are the identical images, but in category theory the identities can also be more abstract objects. But even then the designations or are used and the linking rules mentioned above apply.