The standard algorithm for multiplying two square matrices has a cubic running time. Although the asymptotic effort can be reduced with the help of special algorithms, the determination of optimal upper and lower complexity limits for matrix multiplication is still the subject of current research.

Matrix multiplication is widely used in linear algebra . For example, the factorization of a matrix as the product of matrices with special properties is used in the numerical solution of linear systems of equations or eigenvalue problems. Furthermore, the mapping matrix of the successive execution of two linear mappings is precisely the matrix product of the mapping matrices of these maps. Applications of matrix multiplication can be found in computer science , physics and economics , among others .

The line by column scheme is used to calculate the matrix product.

The matrix multiplication is a binary connection on the set of matrices over a ring (often the field of real numbers ), i.e. a mapping

thus by component-wise multiplication of the entries of the -th row of with the -th column of and by summing all these products. In the notation of a matrix multiplication, the painting point is often left out and written briefly instead . If the order of the factors is to be emphasized, one speaks “A is multiplied by B from the left” for the product and “A is multiplied by B from the right” for the product .

The two real matrices are given

Since the matrix has as many columns as the matrix has rows, the matrix multiplication can be carried out. After having two rows and two columns, the matrix product will also have two rows and columns. To calculate the first matrix element of the result matrix, the products of the corresponding entries in the first row of and the first column of are added up (the asterisks stand for elements that have not yet been calculated):

This calculation scheme now continues in the second row and first column:

It is repeated for the last element in the second row and second column:

Multiplication of a row vector by a column vector

two vectors, where represents the vector to be transposed , both vectors must be of the same length and the result is then a real number. Each entry of a matrix product can thus be viewed as the scalar product of a row vector of the matrix with a column vector of the matrix .

Multiplication of a column vector by a row vector

Conversely , if the first matrix consists of only one column of length and the second matrix of only one row of length , the matrix product results in a matrix. If a single-column matrix is ​​again interpreted as a column vector and a single-row matrix as a row vector , the resulting product of vectors becomes a dyadic product

Multiplication of a matrix by a vector

where , and are. The matrix-vector product is used, for example, in the matrix notation of linear systems of equations .

Multiplication of a vector by a matrix

Conversely, if the first matrix consists of only one row, the result is the vector-matrix product

Square of a matrix

Multiplying a square matrix by itself results in another matrix of the same size, which is called the square of the matrix, that is:

Correspondingly, with the matrix power , i.e. the -fold product of a matrix with itself. Matrix powers are used, for example, to define the matrix exponential and the matrix logarithm . Conversely, a square matrix is ​​called for which

holds, square root of the matrix . A matrix can have several, even an infinite number of square roots. Similarly, a matrix whose -th power gives the matrix is called the -th root of this matrix.

with which the result matrix also has two by two blocks.

All elements of the matrix are required to calculate an entry of the matrix product (middle row). There are two options for creating the double sum required here (top and bottom line).

The matrix multiplication is associative , that is, for matrices , and applies:

When multiplying several matrices, it is irrelevant in which order the partial products are formed, as long as the overall order is not changed. The following applies to the entry at the point of the resulting die product:

If one considers not only the matrix multiplication but also the component-wise matrix addition of two matrices , then the distributive laws are also fulfilled. That is, for all matrices applies

and for all matrices accordingly

The commutative law, however, does not apply to matrix multiplication , that is, to and is in general

For the two matrix products applies and , with which they cannot agree in terms of their dimensions. But even if and are square, both matrix products need not be the same, like the counterexample

The following applies to the transpose of a die product

The order of the multiplication is reversed by the transposition. The same applies to the adjoint of the product of complex matrices

The trace of the product of two matrices and , on the other hand, is independent of the order:

The determinant of the product of two not necessarily square matrices can be calculated using Binet-Cauchy's theorem .

applies. In this case , the zero matrix acts as an absorbing element in the matrix ring , which means that the following applies to all matrices :

However, the ring of the square matrices is not zero divisors ; from does not necessarily follow or . Correspondingly, matrix equations must not be shortened, because it does not necessarily follow . The set of square matrices over a field forms an associative algebra with the matrix addition, the scalar multiplication and the matrix multiplication .

The set of regular matrices over a unitary ring forms the general linear group with the matrix multiplication . The matrix inverse to the matrix is then clearly above

Are defined. For the inverse of the product of two regular matrices we then have:

As a result of the inversion, the order in the multiplication is also reversed. If regular, then the reduction rule also applies, i.e. from or then follows .

Groups of orthogonal and unitary matrices

A real square matrix is called orthogonal if

applies. With the matrix multiplication, the orthogonal matrices form the orthogonal group , a subgroup of the general linear group . Correspondingly, a complex square matrix is ​​called unitary if

applies. With the matrix multiplication, the unitary matrices form the unitary group , a subgroup of the general linear group .

Matrices which can be converted into one another by such multiplications with regular matrices therefore form equivalence classes .

In pseudocode , matrix multiplication can be implemented as follows:

The order of the three for loops can be interchanged as required. Since the three loops are independent of each other, the number of operations required is of the order

The running time of the algorithm is therefore cubic for square matrices , i.e. of the order

In matrix chain multiplication , i.e. the multiplication of three or more non-square matrices, the total number of arithmetic operations can be minimized by a clever choice of the order.

Asymptotically more efficient, two square matrices can be multiplied with the Strassen algorithm . The number of multiplications required to multiply two matrices is reduced from eight to seven by cleverly combining them, which is done at the expense of additional additions. If this method is used recursively, the result is a complexity order of

However, due to the constants hidden in Landau's notation, the Strassen algorithm is only worthwhile for very large matrices. The algorithm with the currently best complexity is an improvement of the Coppersmith – Winograd algorithm with a running time of the approximate order

However, this algorithm is not suitable for practical use. There is a lower bound on the complexity of the matrix multiplication

since each of the elements of the output matrix has to be generated. The determination of the optimal lower and upper complexity bounds for matrix multiplication is the subject of current research. 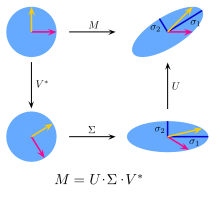 By decomposing singular values, a shear can be represented as the product of a rotation, a scaling and a further rotation.

In a sense, the inverse of matrix multiplication is factoring a given matrix as the product of two matrices and , that is, finding a representation of the shape

Such a factorization is not unique, so are the matrices and placed additional requirements, such as orthogonality , symmetry or a specific occupation structure. Important decompositions of real or complex matrices of this kind are:

Such decomposition of matrices is often used in numerical linear algebra to solve linear systems of equations or eigenvalue problems. For example, the row and column transformations in the Gaussian elimination method can be specified as the product of elementary matrices.

If general and two finite-dimensional vector spaces are over the same body, then each linear mapping can be represented by a base in each of the two vector spaces using its mapping matrix. The image of a vector below the figure in the respective bases can then be used via the matrix-vector product

be determined. In geometry , for example, every rotation around the origin and every mirroring at an origin plane can be carried out in this way by such a matrix-vector product. If there is now a further vector space and a further linear mapping, then the following applies to the mapping matrix of the sequential execution of these two mappings:

The mapping matrix of a sequential execution of two linear maps is therefore the matrix product of the two associated mapping matrices. In this way, for example, each rotational mirroring can be represented as a product of a rotational matrix and a mirroring matrix. Alternatively, a linear mapping can also be carried out by vector-matrix multiplication of a line vector with the transposed mapping matrix. The execution of mappings one after the other then corresponds to a matrix multiplication from the right instead of from the left.

Applications of matrix multiplication include:

Matrices over half rings

Important examples of half rings are distributive lattices , such as Boolean algebras . If one understands the elements of such a lattice as truth values , then matrices over a lattice are two-digit relations . The matrix multiplication in this case corresponds to the composition of relations .

Algebraic structures like rings and groups whose elements are matrices are restricted to square matrices of fixed size. The matrix multiplication, however, is not so restricted. One way to overcome this limitation is to consider instead categories of matrices, each over a solid unitary ring or half-ring. The objects are natural numbers and an arrow is a matrix. The composition of arrows is given by the matrix multiplication. If matrices are also to be added, this is a pre-additive category . If matrices of all finite sizes occur, one gets an Abelian category . If there are only invertible matrices, it is a groupoid . In this case it can be interesting to allow arbitrary finite sets as objects instead of natural numbers.

In addition to the die product, there are a number of other die products: