This article represents the field of physics. For other meanings see Optics (disambiguation) 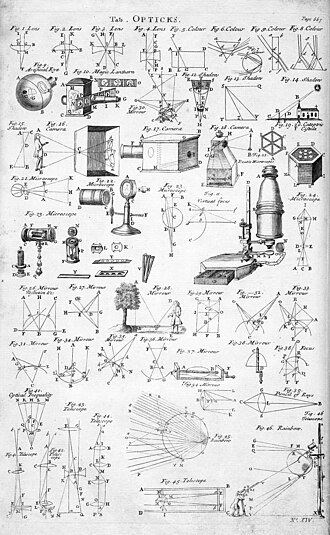 The optics (from ancient Greek ὀπτικός OPTIKOS , belonging to See '), and theory of light called, is a field of physics and is involved in the propagation of light and its interaction with matter, particularly in connection with optical images .

Light is generally understood to mean the visible part of the electromagnetic spectrum in the 380 nm and 780 nm (790 THz to 385 THz) range. In physics, the term light is sometimes extended to the invisible areas of electromagnetic radiation and in general usage also includes infrared light or ultraviolet light . However, many of the principles and methods of classical optics also apply outside the range of visible light. This allows the findings of the optics to be transferred to other spectral ranges, for example X-rays (see X-ray optics ) as well as micro and radio waves .

Also beams of charged particles move in the electric or magnetic fields often under the laws of the optics (see electron optics ). 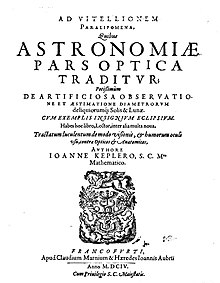 A distinction is made between two classic approaches to light propagation: wave optics and geometric optics . Wave optics are based on the wave nature of light. The laws of geometric optics apply in the event that the dimensions of the optical system are very large compared to the wavelength of the light. If the dimensions of the components are small compared to the wavelength, one speaks of micro-optics .

An important sub-discipline of optics is quantum optics , which deals with the interactions between light and matter. The quantized character of the light plays a particularly important role.

In addition, non-linear optics (in which, in contrast to linear optics, the light influences the surrounding medium and thereby causes additional effects) and Fourier optics are of theoretical and technical interest. An interdisciplinary sub-area is atmospheric optics , in which luminous phenomena in the earth's atmosphere are examined.

Example of a beam path using the Kepler telescope

In geometric optics, light is approximated by idealized rays. The path of light, for example through an optical instrument, is constructed by following the path of the rays. The Snell's law describes the diffraction of light at interfaces between transparent media with different refractive index (on the surfaces of lenses or prisms ). With reflection on mirrors and with total reflection , the rule applies that the angle of incidence is the same as the angle of reflection. Using this method, images can be treated , for example through lenses or lens systems ( microscope , telescope , objective ) and the imaging errors that occur in the process. An important approximation is the paraxial optics , which can be derived from a linearization of Snell's law of refraction and defines important terms such as focal length and image scale.

Diffraction at the slit according to Huygens' principle

Wave optics is the area of ​​optics that deals with the wave nature of light. It explains phenomena that cannot be explained by geometrical optics, since the wave properties of light are relevant for them. For example, in geometric optics, in principle, ideal imaging is possible, whereas wave optics show that a fundamental limit is set for the resolution due to diffraction effects ; this must be taken into account , among other things, for photolithographic process steps in the manufacture of modern integrated circuits . Important elements of wave optics are:

Wave optics can also describe effects that depend on the wavelength of light; one speaks in general of dispersion . (Example: “Why is the sky blue?” ) Depending on the mechanism mentioned above, very different models must be used for the description, which lead to very different wavelength dependencies.

The crystal optics and the magneto- optics build on the wave optics .

Refraction of light in the prism spectrometer; Partial reflection on both refracting surfaces as a side effect

The interaction of light with real (i.e. non- idealized ) surfaces is important for human optical perception, but has not yet been fully understood. What is important is the remission , i.e. the absorption of part of the light and the reflection, transmission or scattering of the remaining part of the spectrum. Reflection and transmission can be described by the refraction of light at the interfaces. Again, a wavelength dependency of most mechanisms must be taken into account, i.e. their dispersion .

Some surfaces, such as human skin, are partially transparent in the uppermost skin layers, so that there is no optically reflective surface, but a reflective layer. An abstract description of the optical processes on such surfaces is complicated, and one of the reasons that computer-generated images can appear artificial.

The eye is the human optical sense organ ; it evaluates the stimulus of light of different wavelengths at the photoreceptors to create action potential sequences of the ganglion cells of the retina . The physiological optics deals with the look and the structure of the eye. In medicine, the medicine that affects the eye is referred to as ophthalmic optics or optometry as the measurement of the visual range . The process of seeing can only partially be explained with the help of optics. The brain plays a major role in this, because it only processes information into what we call seeing. But this part falls to biology. All transparent parts of the eye work together like a single converging lens and create a greatly reduced, inverted, real image. 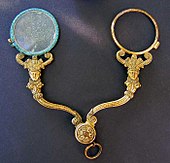 The Visby lenses from the 11th century found on Gotland are linked to the history of the origins of visual aids . Some of these lenses can compete with today's lenses in terms of image quality. The origin of the Visby lenses is unclear despite a detailed analysis, but the processing of rock crystal was already widespread in the 11th century.

The Arab scholar Ibn Al-Haitham (996-1038) wrote about vision, refraction (optics) and reflection in his book "Treasure of Optics". The book was translated into Latin around 1240 . His idea of ​​supporting the eye with ground lenses was ingenious. European monks took up this idea and later made hemispherical plano-convex lenses for visual aids ( reading stones ) than in the Orient .

The design, layout and manufacture of optical systems is referred to as technical optics and, in contrast to physical optics, is part of the engineering sciences , since the focus here is on the concrete construction and manufacture of optical devices and the conception of specific beam paths. Important representatives of this discipline included Johannes Kepler , Eustachio Divini (1610–1685), Joseph von Fraunhofer and Ernst Abbe .

It represents a content-related link between the sub-areas of optical measurement technology , laser technology and theoretical optics (including micro- optics , lighting technology or fiber optics ). Technical optics are used in projection technology , holography and photography as well as in spectroscopy.

The most important building elements, components and devices are listed below.