Fraunhofer is a redirect to this article. Further meanings are listed under Fraunhofer (definition of terms ) .

Joseph Fraunhofer , knight of Fraunhofer since 1824 , (born March 6, 1787 in Straubing ; † June 7, 1826 in Munich ) was a German optician and physicist . He founded scientific telescope construction at the beginning of the 19th century . A color-pure lens type, the Fraunhofer lens , was named after him.

His most outstanding achievement consists in the combination of exact scientific work and its practical application for new innovative products. With this way of thinking, the self-taught Joseph Fraunhofer became the role model and namesake of today's Fraunhofer-Gesellschaft .

Joseph Fraunhofer was born in Straubing as the eleventh child of a glazier. Since his parents died when he was only eleven years old, his guardian gave him a six-year mirror grinder apprenticeship in Munich. There he survived the collapse of his teacher's house in 1801. When he was rescued, Elector Maximilian IV was present, who was impressed by the happy outcome and gave Joseph Fraunhofer 18 ducats . With this money, Fraunhofer bought a glass cutting machine and bought himself off the rest of the teaching months. The secret advice and entrepreneur Joseph von Utzschneider had also observed the rescue and took care of the boy. He made it possible for Fraunhofer to attend Sunday school and gave him access to specialist mathematical and optical literature. After completing his apprenticeship, Fraunhofer joined the Mathematical-Precision Mechanical Institute of Reichenbach, Utzschneider and Liebherr as an optician in 1806 . This institute was founded in 1802 by the inventor Georg Friedrich von Reichenbach and the clockmaker Joseph Liebherr for the production of astronomical and geodetic instruments, Utzschneider had joined as a sponsor.

The optical workshop was relocated to Benediktbeuern in 1807 , where Fraunhofer initially worked under the Swiss optician Pierre-Louis Guinand and became operations manager in 1811. There he developed new grinding machines and types of glass for optical glasses (streak-free flint glass ), which decisively improved the imaging quality of lenses. From 1814 Fraunhofer and Utzschneider were the sole shareholders of the now independent Optical Institute. In this context, Fraunhofer’s improvement of the achromatic lens pair invented in England in 1729 is significant for astronomy . Instead of joining the two lenses together with cement , Fraunhofer placed them one behind the other with an air gap. This brought additional degrees of freedom to correct optical aberrations . Corresponding Fraunhofer achromatic lenses are still used today in amateur astronomy. 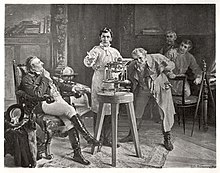 Twelve years after William Hyde Wollaston , Fraunhofer discovered the Fraunhofer lines named after him in the solar spectrum in 1814 . He invented the spectroscope in 1814 . He was also the first to conduct experiments on the diffraction of light on optical gratings (Fraunhofer diffraction ). Fraunhofer used his findings in these areas to measure the material properties ( refractive index ) of optical glasses with significantly increased accuracy. With this knowledge, he was able to manufacture better lenses than was previously possible. 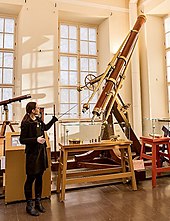 In the Optical Institute, Fraunhofer also manufactured complete telescopes, which also included an installation ( mounting ). Since Fraunhofer there has been a type of mount that became known as the German mount . To this day, the majority of small and medium-sized telescopes and telescopes are set up on a German mount. In 1824 Fraunhofer completed the construction of its largest telescope for the Russian observatory Dorpat (now Tartu , Estonia ). With this telescope with a sensational aperture of 24.4 cm and a focal length of 4.33 m, the astronomer Friedrich Georg Wilhelm Struve mainly examined double stars. A second, identical copy was given to the Berlin observatory in 1829 after the death of Fraunhofer , with which Neptune was discovered by Johann Gottfried Galle in 1846 . Fraunhofer also never saw the completion of its heliometer for the Königsberg observatory .

In 1819 the Optical Institute was relocated to Munich because Utzschneider sold the Benediktbeurer building complex to Bavaria out of financial difficulties and only kept the glassworks. Fraunhofer had to go to Benediktbeuern regularly to monitor the glass melt. On the other hand, better contact with some customers and the academy was possible from Munich , which accepted him as an extraordinary member in 1821 after some quarrels because of his lack of scientific training. In several papers and academic speeches, he now dealt with physical problems such as the matting of the glass and various light phenomena. In 1823 he became a full member and professor of the physical cabinet. 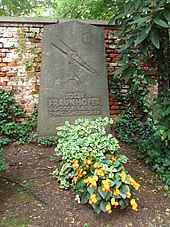 Fraunhofer died of pulmonary tuberculosis as early as 1826 . His grave is in the Old Munich South Cemetery (Alte Arkaden, AA-12, → location ) right next to that of his colleague Georg Friedrich von Reichenbach (Alte Arkaden, AA-11), who died just two weeks before him. Before it was destroyed in the Second World War, it bore the inscription Approximavit sidera ("He brought the stars closer"). 48.126944444444 11.563888888889

Bust of Fraunhofer in the Hall of Fame in Munich.

In May 1868, a memorial with the Fraunhofer statue based on a design by the sculptor Johann von Halbig was ceremoniously unveiled in Munich's Maximilianstrasse . The bronze casting was carried out by the Miller foundry .

Two streets are named after Fraunhofer in Munich's Isarvorstadt and Straubing , his hometown . A Munich underground station also bears his name . The State Vocational School I in Straubing was named after him, as was the State Realschule Munich II (1985) and the Joseph-von-Fraunhofer-Gymnasium Cham .

See also : Joseph von Fraunhofer as the namesake of streets and squares

A physical unit was temporarily named after him. Following a special stamp issued by the Deutsche Bundespost in 1987 worth 80 Pfennig for Fraunhofer’s 200th birthday, Deutsche Post AG issued a special stamp worth 90 euro cents on the occasion of his 225th birthday as a new philatelic tribute. The first day of issue was January 2, 2012. The design comes from Daniela Haufe and Detlef Fiedler from Berlin.

The plant genus Fraunhofera Mart is named after him . from the spindle tree family (Celastraceae).

In 1963 the historical and Fraunhofer glassworks opened in Benediktbeuern monastery as a museum with two preserved port melting furnaces.

The Fraunhofer-Gesellschaft has been awarding the Joseph von Fraunhofer Prize to the scientific achievements of its own employees since 1978.