from Wikipedia, the free encyclopedia
This is the sighted version , which was flagged on September 23, 2021 . There is 1 pending change that has yet to be viewed.

Johann Gottfried Galle (born June 9, 1812 in Radis ; † July 10, 1910 in Potsdam ) was a German astronomer , climatologist and university professor . He was involved in the discovery of the planet Neptune .

Galle was born in the Pabsthaus not far from the municipality of Radis (Pabst is a wooded area there) near Graefenhainichen as the first son of the tar kiln tenant Johann Gottfried Galle (1790–1853) and his wife Maria Henriette nee Pannier (1790–1839). He attended high school in Wittenberg and studied from 1830 to 1833 at the Friedrich Wilhelms University in Berlin . He then took on a position as senior teacher for mathematics and physics at the Guben grammar school . He later switched to thatFriedrichswerder high school in Berlin .

In 1835, his former teacher, the astronomy professor Johann Franz Encke , appointed him as an assistant to the newly built Berlin observatory on the outskirts of the city . Worked there Galle the next 16 years, where he especially a Fraunhofer - refractor with 9  inches (22.5 cm) hole used. In 1838 he discovered an inner, dark ring of Saturn . From 1839 to 1840 he discovered three new comets . In 1845 Galle was promoted to Dr. phil. PhD . In his doctoral thesis , he had dealt with the notes of the Dane Ole Rømer on star positions.

On the morning of September 23, 1846 he received a letter from the French Urbain Le Verrier , who had investigated the orbital disturbances of the planet Uranus . Le Verrier derived the position of an as yet undiscovered planet and asked Galle to search the corresponding part of the sky. On the same night, with the help of his assistant Heinrich Louis d'Arrest , Galle discovered an 8th magnitude star only 1 ° from the calculated position  , which was not shown on the Berlin academic star map . In the following night, a proper motion of the celestial body of 4  arc seconds could be measured, with which the planetary property was perfectly established. Galle, however, always refused to be considered the discoverer of the planet later named Neptune ; he awarded the discovery to Le Verrier. 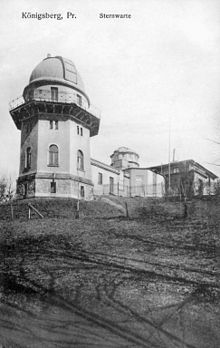 In 1847, Galle von Encke was chosen to succeed Friedrich Wilhelm Bessel as director of the Königsberg observatory . Before the appointment already decreed by Friedrich Wilhelm IV could take effect, Galle resigned from the application at the beginning of 1848 after an intrigue directed against him by Carl Gustav Jacob Jacobi . Jacobi sponsored Bessel's long-time assistant August Ludwig Busch , who then became his successor there.

In 1851 Galle went to Breslau , where he initially took over the management of the observatory there and, from 1856, a professorship for astronomy at the Silesian Friedrich Wilhelms University in Breslau . He worked there for over 45 years. For the academic year 1875/76 he was elected rector . During this time he dealt with the exact determination of the orbit of planets and developed methods for determining the height of the aurora borealis and the orbit of meteors and summarized the data of all comets observed up to 1894 in one work. In addition, he dealt with the magnetism of the earth and climatology . In total, he published over 200 works.

Galle was buried in the Protestant Maria Magdalenen cemetery on Steinstrasse (Polish: ul. Kamienna ) in Breslau, which was closed in 1967.

Memorial plaque on the Kirchplatz house in Lutherstadt Wittenberg

For the discovery of Neptune he received the Order of the Red Eagle from the Prussian King and the Knight of the Legion of Honor from the King of France . He was a member of the Royal Bavarian Academy of Sciences and the British Royal Astronomical Society . The Naturforschende Gesellschaft zu Emden accepted Galle as a corresponding honorary member in their society in 1859. The city of Graefenhainichen erected a memorial to him in 1977.

Galle (moon crater) , Galle (Mars crater) , a planetary ring of Neptune and the asteroid (2097) Galle are named after him .