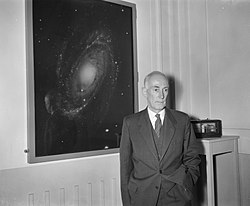 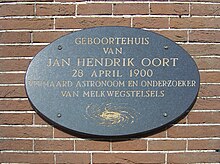 In 1927, Oort and his colleagues confirmed Bertil Lindblad's hypothesis about the rotation of our galaxy ( Milky Way ), which Immanuel Kant had first proposed in 1755, using Oort's rotation formulas . Oort located the Milky Way center 30,000 light years from Earth in the constellation Sagittarius ( Sagittarius ). He showed that the Milky Way has a mass of 100 billion solar masses .

In the 1950s, Oort postulated an area on the edge of the solar system known as the Oort cloud , from which the comets originate. Oort's theories on this have not yet been confirmed, but are widely accepted.

Oort showed the polarization of the radiation from the Crab Nebula and recognized it as synchrotron radiation .

From 1958 to 1961 Oort was President of the International Astronomical Union .

"De Oortwolk" fountain by Jean-Michel Othoniel in Franeker. The water vapor symbolizes the comets on the edge of our solar system