Jacobus Cornelius Kapteyn (born January 19, 1851 in Barneveld , † June 18, 1922 in Amsterdam ) was a Dutch astronomer . He is considered to be the discoverer of the rotation of the Milky Way.

Kapteyn had no own observatory available, but specialized in the analysis of photographic plates and a comprehensive screening , especially of the southern night sky that the observatory of Cape Town were taken. He cataloged 454,875 stars. His work from 1896 to 1900 concentrated, among other things, on the spectral class and the proper motion of the stars and helped significantly to understand the structure of the Milky Way today . Kapteyn discovered the Kapteyns star named after him on David Gill's photo plates in 1897 . In 1904 he found out that the star movement is by no means random, but can be split into two main currents with different directions of rotation. He later realized that he had found the galactic rotation predicted by Bertil Lindblad and Jan Oort . In 1922 he published his life's work, in which he described a cosmic model of a disk-shaped, rotating galaxy 40,000  light-years in diameter, in which the sun is about 2,000 light-years away from the center . The approach is quite similar to our current understanding of the Milky Way, but contains errors due to the lack of knowledge about interstellar absorption during this time.

The asteroid (818) Kapteynia , discovered by Max Wolf in Heidelberg on February 21, 1919, is named after him, as is the Astronomical Institute of the University of Groningen and the Kapteyn lunar crater .

He is the brother of Willem Kapteyn . 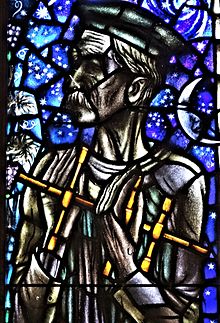 Kapteyn in the academy building Groningen