This article describes the Prussian order and its successors. For other meanings, see Pour le Mérite (disambiguation) .

The Order Pour le Mérite ( French "For Merit ") was founded by King Frederick II and was the highest honor a King of Prussia could give to an officer. The order goes back to the Ordre de la Générosité founded in 1667 .

The Pour le Mérite there was in the military class until 1918. In the commercial class, it exists as a semi-official award named Order Pour le Mérite for Sciences and Arts as the President approved decorations still on.

In 1667, Prince Frederick of Brandenburg, who later became King Frederick I of Prussia , founded the Ordre de la générosité (“Order of Generosity”, also known as “Mercy Cross”) before he was 10 years old when he was not yet electoral prince However, no statutes have been drawn up. From this order, which was awarded sporadically until 1791 as an award for foreigners, Frederick the Great took over the shape, color and form of the inscription in June 1740 immediately after his accession to the throne for the rededication to an Order pour le Mérite ("for merit") , with which he wanted to reward primarily military achievements, but which he also awarded to civilians (including his friend Voltaire ).

On January 18, 1810, Friedrich Wilhelm III decided. to award it only for exceptional service on the battlefield , with it being reserved for officers . The knights of the order formed their own knighthood , which in 1816 comprised one thousand officers. Its members received a lifelong honorary salary . As the statute stipulated that the order could only be awarded once to the same person , the “ oak leaves ” were introduced as a special extension for multiple earnings - three golden oak leaves on the ring. This level was awarded to the Prussian princes Friedrich (Kaiser Friedrich III. ) And Friedrich Karl Nikolaus of Prussia , among others .

During the 19th century, the number of knights of the order grew to several thousand. In 1844 the crown was introduced to the Pour le Mérite. This could be awarded to those who could prove that they had owned the order for at least 50 years. A total of 147 awards can be verified. After the campaign of 1866, Wilhelm I donated the Grand Cross of Pour le Mérite . It was only received five times, namely on November 14, 1866 to King Wilhelm I of Prussia, in 1873 to Crown Prince Friedrich Wilhelm and Prince Friedrich Karl Nikolaus of Prussia , on April 24, 1878 to Tsar Alexander II of Russia and on March 8 , 1878 March 1879 awarded to Field Marshal Helmuth von Moltke .

The king could also award the medal to foreign officers.

During the First World War , Otto von Emmich and Erich Ludendorff were the first to receive the medal on August 7, 1914 for their successful coup against the Belgian Fort Liège . The number of award winners rose sharply, through 132 awards to fighter pilots for a number of aerial victories . So came u. a. Max Immelmann , Manfred von Richthofen and Hermann Göring on the award, which was also called "Blauer Max" because of its color and Immelmann's first name. Other well-known medal bearers were Erwin Rommel , Paul von Hindenburg and the writer Ernst Jünger .

The order holders were entitled to special military honors. So they were always to be greeted first, even by those of higher rank. Guards had to kick into rifles in front of them , which was otherwise only reserved for commanders immediately in front of them and people from ruling houses.

With the end of the Prussian monarchy in the November Revolution, the history of the Military Merit Order, which was awarded a total of 5,430 times, also ended in 1918. 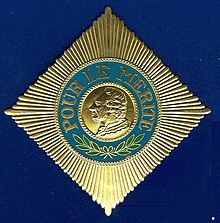 The jewel of the order consists of a blue enamelled and golden bordered eight-pointed Maltese cross , in the top bar of which there is a crowned F (Frederick II) in golden letters , while the other three contain the name of the order: Pour le Mé rite . In the four crossing angles there are golden, opposite uncrowned eagles. The back of the cross is enameled blue and smooth.

The eagles are crowned at the Grand Cross. The cross also has a gold medallion with the portrait of Frederick the Great.

Star to the Grand Cross

The pale gold star to the Grand Cross is almost rhombic, in the middle is the medallion with the portrait of Frederick the Great. The blue enamelled medallion ring shows the name of the order and two green enamelled laurel branches.

The band is black with two silver side stripes and black borders. For merits that corresponded to a second award (oak leaves), a silver median was added to the ribbon.

Pour le Mérite for Science and the Arts

Special stamp order “Pour le Mérite for Sciences and Arts” on the occasion of the Prussian exhibition in Berlin-Kreuzberg. Berlin 1981

In 1842, Alexander von Humboldt suggested to Friedrich Wilhelm IV to found a "peace class" of the order under the name Pour le Mérite for sciences and arts for the three departments of humanities , natural sciences and medicine as well as fine arts . The foundation took place on May 31, 1842. According to the statute, only men were intended as members, but theologians were excluded. The philosopher Friedrich Wilhelm Joseph von Schelling , the poet and orientalist Friedrich Rückert , the legal historian Friedrich Carl von Savigny , the geologist Christian Leopold von Buch , the natural scientist Hans Christian Ørsted and Alexander von Humboldt himself were among the first owners. Adolf von Harnack , who later became chancellor, was accepted as the first theologian in 1902.

By 1918, numerous awards of the Pour le Mérite for science and the arts took place . After the abdication of the Hohenzollern in the course of the revolution of 1918/1919, the “Pour le Mérite” was no longer awarded as a state award, but the medals awarded by the emperor were allowed to be worn publicly in the Weimar Republic . Since the constitution of 1919 forbade all foundations of orders, the remaining order holders organized themselves as a free community of artists and scholars to bestow civil awards. The State Ministry approved this custom in 1924. In this way, Gerhart Hauptmann was honored in 1924 , Max Liebermann in 1927 and Käthe Kollwitz in 1929 (as the first woman).

In the time of National Socialism , state awards were donated again. The responsibility for this initially lay with Reich President Paul von Hindenburg and after his death in 1934 it passed to Reich Chancellor Adolf Hitler . Hermann Göring (himself a knight of the order Pour le Mérite) as Prussian Prime Minister had the previous owners checked by the Gestapo "for their political and artistic suitability", whereupon the order was denied to all Jews and political opponents of the Nazi regime such as communists - including Käthe Kollwitz.

After the Second World War , the "Peace Branch" was initially not awarded, but, as in the Weimar Republic, a civil community with state recognition under the name Orden Pour le Mérite for science and the arts was formed . Federal President Theodor Heuss became protector of the order in 1952. The secretariat of the order is led by the Minister of State for Culture with the Federal Chancellor . The “Pour le Mérite” has a high prestige in Germany , but no official status like the Order of Merit of the Federal Cross of Merit .

The number of order members is limited to 40 German order holders. The number of foreign members should not exceed the number of domestic members. About the same number of domestic as well as foreign members of the order chapter should fall into the classes of the humanities, the natural sciences and the arts. As the successor to Eberhard Jüngel , Christiane Nüsslein-Volhard has been Chancellor of the Order since 2013 . New members are elected by the Chapter of the Order at the annual meetings on the basis of proposals by the Chancellor and the Vice-Chancellor, for which every member entitled to vote can submit proposals. Members of the order chapter are all members of the order. An election can only take place if at least two thirds of the domestic members take part.

The medal consists of a blue enameled gold ring on which the Prussian crown is attached on the outside in four opposite places and the string FF II is affixed four times on the inside , while the denomination runs on the ring. In the middle there is a gold medallion with an eagle. The ribbon corresponds to that of the military class.

According to the statutes (in the most recent version from 2010), the insignia of the order are "property of the Federal Republic of Germany". They are literally only "awarded" and must be returned after the owner's death.

Postage stamp of the Federal Post Office from 1992 . On the occasion of 150 years of the Pour le Mérite Order

See also : List of bearers of the Pour le Mérite Order for Science and the Arts

The physicist Albert Einstein was the only member to return his medal back to the Chancellor of the Max Planck Order in 1933 and refused to rejoin the order during tentative discussions about the revival of the Order in 1951. Louis Pasteur refused to be awarded the “Pour le Mérite”.

Members of both classes

Due to the completely different award requirements, very few honors have been awarded with both classes.

Pour le mérite for science and the arts