The title of this article is ambiguous. Further meanings are listed under Maltese cross (disambiguation) . 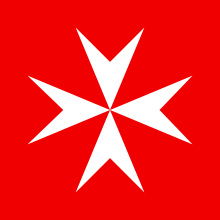 Logo of the Johanniter-Unfall-Hilfe e. V.

The Maltese or Johanniter or Amalfi cross is an eight-pointed cross and a national symbol of Malta like the former Maritime Republic of Amalfi and a symbol of various Christian orders.

The Maltese cross is depicted on the Maltese 1 and 2 euro coins . In addition, it graces the - from the coat of arms of the former maritime republics of Venice , Genoa , Pisa and Amalfi existing - Bugflagge the Italian Navy (see figure below: order clockwise from top left)

There is no difference between the Johanniter Cross and the Maltese Cross. What is different nowadays in Germany and some other countries is only the shape of the frame in which the cross is held. While the aid organization of the Evangelical Johanniter ( Johanniter-Unfall-Hilfe ) has the white, eight-pointed cross in a round signet , the Catholic aid organization of the Maltese ( Malteser Hilfsdienst ) has it in a shield-shaped coat of arms . If the signet or coat of arms of a certain organization is not to be used, the use of the term "Johanniterkreuz" is recommended, as it is a symbol for the Order of St. John stands (hence "Johanniter"), who has existed since 1099, but was only resident in Malta since 1530 . A neutral designation would also be “ Hospitaliterkreuz ”, which would not leave any negative connotations for either organization. In the early days of the order in the Holy Land, the term "Hospitaller" was synonymous with "Johanniter". On the other hand, “Maltese cross” is more commonly used internationally and in general terms. The use of the term “hospitaller” goes back to the former seat of the order in Jerusalem: Friedrich II. Von Hohenstaufen assigned the “Hospital of St. John” to the order, while a competing order, the Templar Order , assigned the former temple of Solomon as the order house assigned.

The Johanniterkreuz, like the Maltese cross, is heraldically an arrowhead cross and, like the paw cross (see coat of arms of the Knights Templar), another, artistically refined form of a cross, in which the eight points of the cross represent the eight Beatitudes of the Sermon on the Mount and the four arms the four symbolize knightly cardinal virtues . As such, the cross as a Christian symbol also symbolizes the crucifixion of Jesus Christ .

The eight-pointed cross itself is an ancient symbol that can be found in various forms in ancient times . As an artistic element, Maltese crosses have been known from Byzantine culture since the 6th century . The city of Amalfi claims to have used the symbol even before the founder of the order, Brother Gerhard (who came from Amalfi). In fact, coins from the city from the time before the order was founded sometimes bear a kind of Maltese cross. However, the first seals of the order and its hospitals do not show a Maltese cross, but different cross shapes. In addition to the patriarchal cross, paw crosses and mixed forms are also used inconsistently. Sources about the Knights Templar say that it chose its symbol (a paw cross) based on the model of the Order of St. John at that time. Establishing a specific logo was alien to the early medieval period. Even in Rhodes , the coat of arms of the order and its then Grand Master Pierre d'Aubusson do not bear a Maltese cross. However, eight-pointed crosses of various shapes can be found on older coins of the order. A panel painting created by Pinturicchio around 1505 shows a member of the Order (Pierre d'Aubusson?) Kneeling in front of the city of Rhodes in black religious robe with the Cross of St. John on his chest.

It is not certain when the Order of St. John adopted the eight-pointed cross as a symbol. It can be proven in its current, symmetrical form on the order's cloaks, at least on drawings made by the Vice Chancellor of the Order Guillaume Caoursin after successfully defending against the Turkish siege of Rhodes in 1480. The chapter of the order of 1489 says about the cross: “So the knights of the hospital, fulfilling both one and the other of these duties with pious zeal, should wear the eight-pointed cross on their robes, so that they may be remembered in their hearts, to carry the cross of Christ, adorned with eight virtues that accompany them. "

Previously, the order only wore a simple white bar cross on a black or red background, which for a long time adorned the military clothing of the members of the order alongside the eight-pointed cross and still represents the official flag of the Order of Malta and the English Order of St. John . In civil affairs the always white cross was worn on a black background, in armed conflicts on a red background. In the heraldry of the order, the eight-pointed cross was only used as an underlay for the coat of arms; the four-part coats of arms of the knights of the order show a white bar cross on a red background at the top left and bottom right. The colors also have a heraldic meaning: white stands for purity or innocence, black for strength, red for struggle, life, commitment, blood.

The use of the Maltese cross in the form used today has only been consistently documented in the order since the 16th century (Malta).

The cross consists of eight points. According to today's interpretation, these eight points symbolize the eight Beatitudes of Jesus' Sermon on the Mount in the New Testament of the Bible (Mt 5: 1ff).

Another interpretation of the eight tips is the assignment to the eight "tongues" of the Order of Malta:

The four inward-pointing tips are assigned to the four cardinal virtues :

In Unicode is in block Dingbats as U + 2720 maltese cross one character, which as shown in the code tables glyph but rather a Tatzenkreuz represents.