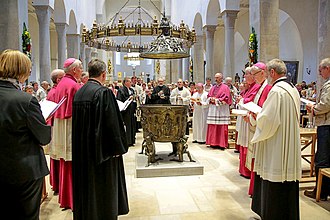 Ecumenical baptism vespers as part of the reopening celebrations of Hildesheim Cathedral , August 16, 2014. - The common sacrament of baptism in the name of the Triune God is the basis of the ecumenical movement.

The ecumenical movement (from ecumenism , Greek oikoumene , " world , the whole inhabited earth") is a movement in Christianity that strives for a worldwide unification and cooperation of the various denominations .

According to the Irish approach, the movement began in the early modern period at the beginning of the 20th century. It found its institutional form primarily in the World Council of Churches and the local working groups of Christian churches .

Beginnings of the modern ecumenical movement

Various Christian organizations emerged in the 19th century, such as mission and Bible societies , the Christian Association of Young Men and the Christian World Student Union , which already showed a striving for unity across national and denominational boundaries. In 1874 and 1875 Ignaz von Döllinger invited to the Bonn Union Conferences . The modern ecumenical movement was initiated by Protestant churches in particular at the beginning of the 20th century . At the same time you became the driving force in this movement.

The world missions conference in Edinburgh in 1910 is seen as the beginning of the modern ecumenical movement . Three basic goals were decisive:

In the years after the Second World War , the Protestant theologian Frère Roger founded the Communauté de Taizé as the first ecumenical fraternity in church history.

Ecumenical movement in Germany after 1945

After social life was re -established in Germany in the post-war period , the generation of young people who had grown up during this period began with critical questions. The questions did not stop at the role of the churches in National Socialism . On the one hand, students and young pastors found a lack of resistance up to willing submission and even active support - for example by the German Christians - and on the other hand there were positive examples - the Confessing Church on the Protestant side - that could serve as a model. Above all, however, the “separation of denominations”, the lack of unity, was perceived as the cause of the failure: however, shared experiences in the concentration camps led to a rethink.

In the denominational youth organizations in particular, there was a common ground through multiple initiatives, which in the 1960s finally led to a renewal in the history of ecumenism at all international levels . At the same time, however, after the reconstruction due to the economic dynamism - especially in West Germany with the " economic miracle " - there was also a turning away from old traditions and a move towards an " American way of life ".

In 1948, the Working Group of Christian Churches in Germany was founded , in which eleven churches and ecclesial communities initially came together to promote ecumenical cooperation and the unity of the churches. In the statutes, the members state that they have in common: “They confess the Lord Jesus Christ as God and Savior according to the Holy Scriptures and strive to do together what they are called to do, to the glory of God, the Father, the Son and the Holy Spirit. ”It works internally through mutual information, advice and cooperation between the churches at local, regional and international level and promotes theological dialogue with the aim of clarification and understanding; externally, it represents common concerns of the member churches in public and at political institutions.

The experiences in ecumenically motivated connections qualified this generation of “ministerial brothers” of different denominations for a “collegial” discussion with representatives of the Eastern Churches and, from the 1980s, for an opening towards Islam.

The ecumenical movement and its institutions today 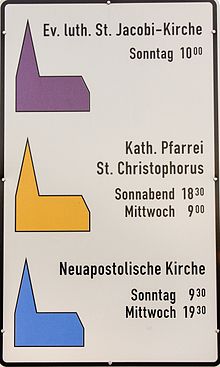 It is a matter of course in many places today: signs for church services are set up together

The ecumenical movement has made many things for granted that were unthinkable around the middle of the 20th century. These include cross-denominational church services, Bible, prayer and discussion groups, encounters and community festivals, theological consultations at church leadership level, joint declarations on social issues and joint diaconal action.

The movement today is u. a. represented by the World Council of Churches, to which the Catholic Church only belongs as a guest due to its self-image. The council was established in 1948; it currently includes 349 churches from more than 120 countries. Churches that reject the Trinity (such as the Unitarians ) cannot join the council . The Council is dedicated to the above three tasks. But there are also some other ecumenical efforts that have also found an institution. For example, the Community of Evangelical Churches in Europe (CPCE) is an amalgamation of 105 churches based on the Leuenberg Agreement of 1973 with mutual pulpit and communion fellowship . The basis of the Agreement is the insight that a difference in confession does not necessarily mean a church separation. Evangelical churches that (like Mennonites and Baptists ) reject infant baptism and people who were merely baptized as infants “re-baptize” for acceptance into their congregations cannot join this fellowship.

The goal of the movement

Formulating the goal of the ecumenical movement is itself part of the process. It presupposes a common concept of the church that is not simply given. Usually an organizational unification of the churches, the mutual recognition of their right doctrine and the common celebration of the Lord's Supper are seen as a model.

But that is a controversial goal. Within the ecumenical movement, too, voices are repeatedly voiced that reject an ecumenical consensus and demand an ecumenical consensus, since every church must necessarily have the right to represent its own positions. This rethinking is based, on the one hand, on a Protestant concept of the church, which understands church unity essentially, not just temporarily, as a spiritual goal. On the other hand, the rethinking is based on the Roman Catholic concept of the church, according to which the one Church of the Creed continues to exist in the Roman Catholic Church - even if it has been weakened and obscured by divisions. That is why the Holy See claims to represent the voice of the Church. Further difficulties exist u. a. in the fact that the Pope is also head of a secular state, which influences his administration.