This article deals with the ecclesiastical movement. The series of the same name can be found under Confessing Church (series) 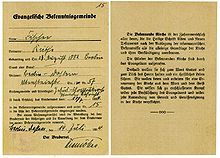 Membership card of the Confessing Church, Berlin-Dahlem 1934 (signature: Niemöller , front and back)

Stamp of the Confessing Community of Potsdam with the motto “Teneo quia teneor”, approx. 1945

The Confessing Church (BK) was an opposition movement of Protestant Christians against attempts to bring the teaching and organization of the German Evangelical Church (DEK) into line with National Socialism . Such attempts were made by the German Christians until 1934 , then state-appointed church committees and, in some cases, direct state commissioners who deposed the church representatives.

The BK reacted to this by delimiting its teaching, organization and training, and later also with political protests ( church struggle ). Since its foundation in May 1934, it has claimed to be the only legitimate church, and since October 1934 has created its own management and administrative structures with an ecclesiastical “emergency law”. Many of their pastors remained servants of the respective regional church (especially in Württemberg, Bavaria and Hanover). The BK did not form a unified opposition to the Nazi regime; Large parts of the professing Christians also remained loyal to the “ Führer state ” and also affirmed the Second World War .

The starting point for the formation of an internal church opposition to German-Christian and state efforts to achieve conformity was the church policy of the Nazi regime. This followed the totality claim of the National Socialist ideology . Since it was founded , the NSDAP has pursued a double strategy: its program declared “positive Christianity” on the one hand to be the popular religion of all Germans in order to take over Christians, and on the other hand, subordinated it to racism and nationalism . Parts of the NSDAP sought a long-term dissolution and replacement of Christianity by neo-paganism ( neo-Paganism ).

The Confessing Church came into being because the Nazi regime had direct influence on the internal structure of the church after it " seized power ". These attacks by the state took place in three clearly different phases:

The BK was founded in accordance with this state church policy

The consequences, from protest to common resistance against the Nazi regime , which should have followed from the clash between the church's creed and the totalitarian Nazi state ideology, did not materialize.

Some of the theologians and pastors in the BK, such as Walter Künneth and Rudolf Homann, represented a depoliticized church struggle and limited themselves in their writings to giving Protestant “answers” ​​to the anti-church ideological attacks in Alfred Rosenberg's “ The Myth of the 20th Century ” - in “defense” of the “ethnic religion” and church of a National Socialist “neo-paganism” propagated by Rosenberg, whose anti-Semitic orientation and implementation in the National Socialist state they were on the other hand prepared to affirm.

The motto of the Confessing Church was Teneo, quia teneor - "I hold because I am held". 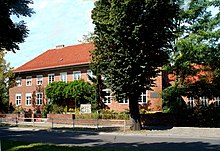 Parish hall of the Protestant parish in Dahlem 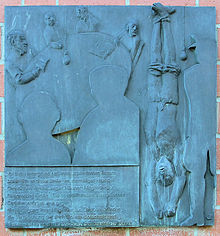 Memorial plaque on the site of the former YMCA house in Berlin-Kreuzberg , Wilhelmstrasse 36, a meeting point for members of the Confessing Church

In response to the takeover of the state Aryan paragraph , the baptized Jews as "non- aryan should be" expelled from the Protestant Church, founded some Berlin pastor, including Martin Niemoller and Dietrich Bonhoeffer , in September 1933 the Pastors . He explained the incompatibility of the church's Aryan paragraph with the Christian creed and organized help for those affected. With this he became a forerunner of the Confessing Church with other groups like the Young Reformation Movement .

At the hour of birth of the Confessing Church , the self-proclamation of the confessional communities gathered in Ulm "as legitimate Protestant Church in Germany" , which was included in the Ulm Declaration of April 22, 1934 at the suggestion of Hans Asmussen .

This self-predication was taken up at the first Confessional Synod from May 29 to 31, 1934 in Wuppertal- Barmen ; there she adopted the “Barmen Theological Declaration” as her theological foundation. The declaration placed Jesus Christ as the only ground of faith of the church against foreign criteria and authorities and thus also rejected the state's claim to totality and the appropriation of the gospel for irrelevant political purposes. This debate about the true faith within the Church and to its relationship with the state policy in the "Third Reich" is called the church struggle .

After this synod, many so-called confessional congregations were formed, led by fraternal councils . They rejected the official church leadership and thus also turned against the National Socialist state, which, according to thesis 5 of the Barmer Declaration, was denied the claim "to become the only and total order of human life and thus also the determination of the church. fulfill". Initially, this resistance was hardly or not at all politically justified, but was directed against the church leaderships dominated by the German Christians.

At the second Reich Confessional Synod, on October 19 and 20, 1934 in Berlin-Dahlem, the Confession Synod passed the “ Dahlem Emergency Law ” and proclaimed the Reich Brotherhood Council as the legitimate leadership of the church, while the official church authorities no longer had any authority. At the instigation of the intact churches , he was assigned a provisional church leadership in November, which remained in office until February 1936. The theological justification was very similar between the Reformed or United Christians on the one hand and the Lutheran Christians on the other, but not identical in all details. For the Lutherans, it was the status of confession or status confessionis enshrined in the Evangelical Lutheran Church , which is given when church superiors distance themselves from the Lutheran confession - recorded in the Augsburg Confession . The Lutheran synodals saw this as given in the theology of the German Christians of the “ orders of creation ”, to which this nation , race and state belonged.

The claim of the opposition pastors was proclaimed in the empire on some so-called "confession days". In Frankfurt am Main alone , 12,000 people took part in the Confession Day, on which the State Brotherhood Council formed at the end of October 1934 raised the claim to be the legal leader of the Nassau-Hessen Church; 140 pastors of the regional church disobeyed their National Socialist bishop. By the end of September 1934, of the total of 800 clergy members of the Nassau-Hessen regional church, 361 serving and a further 90 not yet ordained vicars, i.e. more than half, had joined the Confessing Church.

Within the Evangelical Church there were parishes and pastors who belonged to the Confessing Church, and there were confessional splits from parishes whose pastors had turned to the German Christians with some of the parishioners. Here prospective pastors (vicars and at that time still so-called auxiliary preachers) functioned illegally and alongside the church structures, without remuneration or only remunerated from donations, as preachers; For church services, emergency churches were set up in restaurants and, when this was banned, in factories and sheds. After the time of National Socialism, the Protestant Church only partially legalized these informal employment relationships: the period of service was taken into account, but no salary was paid.

At the end of 1935, Elisabeth Schmitz distributed her memorandum on the situation of German non-Aryans on the daily persecution of Jews in the Nazi state to 200 members of the Confessing Church, including Karl Barth , Dietrich Bonhoeffer and Helmut Gollwitzer . For security reasons she appealed anonymously to the responsible forces of the Confessing Church to provide assistance to the persecuted.

The next Confessional Synod took place in Bad Oeynhausen from February 18 to 22, 1936 , at which the second provisional church leadership was elected. Meanwhile, the Confessing Church had but divided into two wings, the temperate, the cooperation with the appointed in September 1935 new " Reich Minister for Church Affairs " Hanns Kerrl advocated in the new Reich Church Committee, and the radical wing, who refused it. A secret memorandum from the Confessing Church to Hitler from May 1936 described the existence of the concentration camps as the hardest burden on the evangelical conscience, but was never published by the Confessing Church. After the memorandum became known abroad, there were isolated arrests of clergymen, but the majority of the Confessing Church immediately abandoned the memorandum and even the subsequent discontinuation on some pulpits by more determined representatives of the Confessing Church left the decisive political passages in the memorandum not only dealt with Christians, away. With the Grüber office, too , the church supported people who were persecuted as Jews only to the extent that they had converted to Christianity or were of converts.

After initial success, the Confessing Church was increasingly persecuted from around 1937 onwards, but stuck to its own organization. Nevertheless, contrary to the self-portrayal of many of its members, it was not an opposition to National Socialism as such after 1945. However , the Confessing Church was recognized by the Allied Control Council as an "active anti-fascist resistance movement".

Martin Niemöller summarized what happened in 1976 as follows:

He describes his guilt and that of the church with the words: "We have not yet felt obliged to say anything for people outside the church ... we were not yet so far that we knew we were responsible for our people."

Hermann Maas , pupil and student in Heidelberg, among others, from 1915 pastor at the Heiliggeistkirche in Heidelberg, joined the association for the defense of anti-Semitism in 1932 . He was a member of the Confessing Church and Pastors he engaged since 1933/1934. In 1938 he was the head of the “Church Aid Office for Protestant Non-Aryans” in the city area, also helped all those persecuted for racism and worked closely with the Grüber office in Berlin . With his international contacts, he helped many people classified as Jews or half-Jews to escape until the beginning of the war. Despite being banned from his profession in 1933, he preached against the inhuman policies of National Socialism. In 1943, under pressure from the Nazi regime, he was removed from office by the Baden Evangelical Church Council. He was later deported to France for forced labor. After the liberation in 1945 he resumed his work as a pastor. With his thinking and, above all, his actions, he himself - as a member of the Confessing Church - is described as an isolated case and a notable exception. In 1950 he was Israel's first official German state guest.

Influence of the BK on the EKD after 1945

Leading members of the BK campaigned in October 1945 to ensure that the Stuttgart confession of guilt came about.

Some representatives of the Confessing Church played an important role in the re-establishment of the Evangelical Church in Germany from 1945. Its founding manifesto, the “Barmer Theological Declaration”, was included in the confessional documents of many Protestant regional churches. However, the synodal democracy practiced in the church struggle only made a limited impact in the church constitutions.

Murdered and those who died from imprisonment

The particularly well-known victims Dietrich Bonhoeffer and Friedrich Weißler, however, were never accepted into the intercessionists of the Confessing Church during the time of National Socialism, because they had acted politically from the point of view of the Church and the Confessing Church had always attached great importance to not offering any political resistance .

The introduction to the book of martyrs also emphasized:

"Everyone who is mentioned in this book ... did not take on their suffering because they did not agree with the politics of the Third Reich and recognized it as a fate for our people, but only ... because they did Confession of the Church saw attacked and it was also the commitment of life to maintain faithfulness to Christ's sake. "

The church struggle historian Hans Prolingheuer emphasized that this view depoliticized the confession of Christ, which for some of the confessors had political significance and helped determine the form of expression of their protest. The book omitted some of the members of the BK who were murdered as political resistance fighters of July 20, 1944 , conscientious objectors , “ disruptors of military strength ” or Jews . Werner Oehme, a pastor in the GDR, collected these names in 1979:

The BK never stated that loyalty to the confession was incompatible with service in the SS or in the concentration camp . A few BK members were temporarily in the SS at the same time: