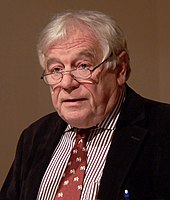 Wolfgang Benz (born June 9, 1941 in Ellwangen ) is a German historian of contemporary history and an internationally recognized representative of prejudice research , anti-Semitism research and Nazi research . From 1990 to 2011 he taught at the Technical University of Berlin and headed the associated center for research on anti-Semitism , whose yearbook he published until 2011.

Benz studied history , political science and art history in Frankfurt am Main , Kiel and Munich. It was in 1968 when Karl Bosl at the Ludwig Maximilian University of Munich with the topic of southern Germany in the Weimar Republic (domestic policy 1918-1923) PhD . From 1969 to 1990 he was a research assistant at the Institute for Contemporary History in Munich.

In 1985 Benz co-founded Dachauer Hefte and has published it ever since. In 1986 he was visiting professor at the University of New South Wales in Sydney . In 1992 he received the Geschwister-Scholl-Prize and the Prize The Political Book of the Friedrich-Ebert-Stiftung . Since 1992 he has published the Zeitschrift für Geschichtswwissenschaft and since 2001 the Handbuch der deutschen Geschichte . He often works with the Federal Agency for Civic Education . In 2007 he taught as a visiting professor at the Sir Peter Ustinov Institute for Research into and Combating Prejudice at the University of Vienna . He publishes the paperback series European History at S. Fischer Verlag . Benz is also the editor of the series Life Pictures - Jewish Memories and Testimonies , which has been published by Fischer-Verlag since 1991 as part of the Black Series .

Some of Benz's publications are regarded as standard works of historical research during the time of National Socialism and the course of the Holocaust, including the Encyclopedia of National Socialism (1997, with Hermann Graml and Hermann Weiß ) and the multi-volume handbook of anti-Semitism . Benz's book What is Anti-Semitism? (2004) was designated as a standard work, as was the nine-volume series Der Ort des Terrors (2005), edited with Barbara Distel , which is considered the most comprehensive representation of the Nazi camp system and for the first time brought together the available research results in the narrower sense of the processing.

Benz is on the scientific advisory board of Farid Hafez 's yearbook for research on Islamophobia .

Comparison of anti-Semitism and Islamophobia

In December 2008, Benz headed a one-day conference at the Berlin Center for Research on Antisemitism on the subject of “The image of the enemy Muslim - the image of the enemy Jew .” In contrast to criticism of the conference concept, he emphasized that as a prejudice researcher on anti-Semitism one had to learn “whether the same mechanism also applies to other minorities [... ] Disaster can be caused. ”The hatred of Judaism and Islam is particularly similar in conspiracy fantasies and assertions of religious commandments: Just as statements from the Talmud are presented to Jews, statements from the Koran are presented to Muslims . Both religions are accused of being vicious and inhumane and of requiring immoral behavior towards those of different faiths. The allegations that Jews consider themselves chosen and must be hostile to non-Jews also exist against Muslims.

Before the conference, it was feared that anti-Semitism would be equated with Islamophobia . The political scientist Matthias Küntzel criticized the fact that the comparison would trivialize the Holocaust , the threat to Israel from the Iranian nuclear program and the hatred of Jews by Islamists . Benz dismissed this criticism in the media as “completely ridiculous”. There was no discussion with Küntzel at the conference.

Outside Germany, the relationship between anti-Semitism and Islamophobia has been scientifically discussed since 1988, reinforced by the consequences of the terrorist attacks on September 11, 2001 . In Germany, Juliane Wetzel , Salomon Korn , Sabine Schiffer , Constantin Wagner and Micha Brumlik, like Benz, see structural and concrete analogies between the hatred of Jews in the 20th century and hatred of Islam today. Historical and qualitative differences, on the other hand, are emphasized by Matti Bunzl , Monika Schwarz-Friesel , Evyatar Friesel and others. Above all, Julius H. Schoeps and Matthias Küntzel emphasize that there is no conspiracy theory of world Jewry analogous to anti-Semitism in hatred of Islam . Norbert Frei agreed with Benz regarding the socio-psychological comparability of today's Islamophobia with hostility towards Jews since around 1880.

Benz deepened the comparison in his work Die Feinde aus dem Morgenland , published in 2010 . How fear of Muslims endangers our democracy . Common to both anti-Semitic and Islamophobic prejudices is “the division into good and bad as well as the phenomenon of exclusion”. A fundamental difference is that “today it is no longer about the emancipation of the Jews, but about the integration of the Muslims”. Benz later emphasized that he had never equated Islamophobia and anti-Semitism, but rather "compared the methods of exclusion". Just as it was a method of “some 'experts'” to justify hostility towards Jews first with the contents of the Talmud and later, from a racist point of view, with “Jewish” genes that “led Jews to evil”, there are experts today who argued similarly : “What used to be Talmud baiting is now Koran baiting. A minority is stigmatized as dangerous because it is supposed to be ordered by religion. ”This is how Benz judged Thilo Sarrazin's statements on the genetic disposition of Jews and other groups as racist. Benz also sharply criticized the conspiracy theorist Udo Ulfkotte . Ulfkotte conjures a "Muslim world revolution" and a "secret plan to infiltrate non-Muslim states". This only springs from his imagination, but is sufficient for xenophobes as an assurance, just as the protocols of the Elders of Zion suffice for anti-Semites.

In May 2010, Benz judged a poster by the artist group Surrend (“The Jewish Lobby in Germany”) as not anti-Semitic. Political scientist Stephan Grigat criticized this as a blatant misjudgment.

In November 2010, Benz gave an interview to the Internet portal Muslim-Markt without criticizing its anti-Semitic tendencies. The German representation of the Scholars for Peace in the Middle East and Stephan Grigat criticized this.

Benz repeatedly criticized the Pegida movement. This revived the concept of the " Occident ", which historically has always been a "battle or demarcation slogan" (against barbarians , Jews, Muslims or Christian deviants). Pegida tries to mobilize fears “with a mish-mash of arch-conservative, xenophobic and anti-Islamic elements”.

Benz is a member of the advisory boards

On the occasion of his retirement, Benz was awarded the Golden Badge of Honor of the TU Berlin. Charlotte Knobloch praised Benz for “his outstanding achievements in the field of anti-Semitism research”, they were “unique in Europe and have set global standards”. Mordechay Lewy attested him "an enlightening vocation [...] to effectively counter the deniers of the Shoah".

In 2012 he received the award Against Forgetting - For Democracy for his services “for the culture of remembrance in Germany and his social commitment against prejudice and against xenophobia”.