The Friedrich Ebert Foundation e. V. (FES) is the largest and oldest so-called party - affiliated foundation in Germany and is close to the Social Democratic Party of Germany (SPD). Legally and economically, it is not a foundation, but a registered association . Your seat is Bonn ; it has a branch in Berlin . 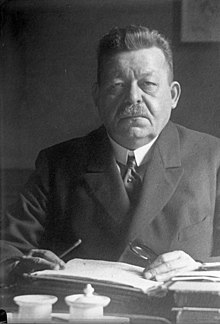 The foundation named after the social democratic German Reich President Friedrich Ebert and suggested by himself in his will was established a few days after his death on March 2, 1925. The SPD executive commissioned the party cashier Konrad Ludwig to set up the foundation, whose start-up capital was made up of donations from the mourners.

The main task should be to counteract the discrimination of workers in the field of education: “The Friedrich-Ebert-Stiftung pursues the purpose of giving young, capable proletarians aid for a course of study at state-recognized institutes. In principle, only those persons are supported who bring a recommendation from the party organization ”(SPD yearbook 1926). By the end of 1931, a total of 295 students had received around 52,000 Reichsmarks. However, by this time the foundation's funds were completely exhausted by the effects of the global economic crisis . In 1933 the FES was banned by the National Socialists, as were all other party's institutions.

After the Second World War, the FES was re-established on the initiative of the Socialist German Student Union . The SDS founding congress in September 1946 had already decided to appeal to the party leadership. As of 1948, based on an agreement between the SDS and SPD board members, the first scholarships were paid to selected SDS functionaries, including Helmut Schmidt .

In 1954 it was converted into a non-profit association “for the promotion of democratic public education”. Since then, the FES has been increasingly financed by taxpayers' money, which has flowed into student grants in particular.

Since the 1960s, the FES has also been increasingly involved in the field of development aid . She supported democratization and liberation movements such as the African National Congress and played an important role in overcoming the dictatorial regimes in Greece , Spain and Portugal . So it was no coincidence that the Portuguese Socialist Party was founded in 1973 in a FES home elementary school in Bad Münstereifel .

As the oldest party affiliated foundation, the FES served as a model for the other political foundations that were not established until after the Second World War.

Headquarters of the Friedrich-Ebert-Stiftung on Godesberger Allee in Bonn 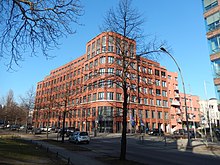 Headquarters of the Friedrich-Ebert-Stiftung in Hiroshimastraße in Berlin

In 2017, the foundation employed a total of 672 employees in its branches in Bonn and Berlin , in 14 regional offices, an academy in Germany and 106 foreign representations. It is financed mainly through grants from the federal and state budgets (2007 around 111.2 million euros out of 119.5 million euros in total income; 2017 176.6 million euros). In 2018 the foundation received around 170 million euros from the German state.

The foundation is a member of the European Movement Network .

The foundation is still based on the tasks specified by Friedrich Ebert,

The foundation names as its strategic goals:

The Student Funding Department has looked after over 21,000 scholarship holders to date (as of February 27, 2018). In addition to qualifications and above-average academic performance, the most important criterion for admission is above-average socio-political commitment. Over 90% of the sponsored finish their studies with a distinction . In 2010 about 2500 students were in the funding. In addition to material support, the scholarship holders also receive so-called non-material support (i.e. participation in socio-political seminars, conferences and other events which, among other things, serve to provide professional qualifications). Until 2009, the FES maintained its own conference center on the Venusberg in Bonn for these scholarship events. Due to the emotional connection of many current and former scholarship holders, the closure within the FES was not undisputed. A petition against the closure was also set up. The Venusberg was closed anyway.

Once a year, at the nationwide Federal Representation Conference (BVK), the scholarship holders elect their Federal Representation (BVS), which in the following year advocates the interests of the sponsored and the dialogue with the foundation. The scholarship holders operate their own internet platform (fes-stip.de) for networking, which contains an extensive range of mailing lists, services and communication tools. The FES expands the offer with the platform www.fes-studienfoerderung.de. Under fes-ehemalige.de communicate former FES scholarship holders. All three platforms are run by the non-profit association FES-Former e. V. run on a voluntary basis. A speaker looks after the scholarship holders for the duration of their funding, and they also belong to a university group (HSG) at the respective university location.

Since 1971 a solidarity fund of the FES has also been supporting needy foreign students, whereby people persecuted for political, ethnic or religious reasons have priority. The fund is financed exclusively from donations from former and current scholarship holders. The donations have benefited over 1000 foreign students so far - 31 students are currently receiving a grant from the Solidarity Fund. Every year, the BVK scholars elect two scholarship representatives from the fund to its steering committee.

In its international development cooperation, the Friedrich-Ebert-Stiftung works in over 100 countries to promote democracy and social justice, for strong and free trade unions as well as for human rights and gender equality . The partners of the FES traditionally include parties and trade unions, non-governmental organizations , scientific and political advisory institutions, but also government institutions (such as parliaments and ministries) or UN organizations . This worldwide network also serves as a forum for the transfer of experience and policy advice and makes the FES (similar to other party-affiliated foundations ) an "international organization" with contacts all over the world and to a wide variety of social sectors.

The international work is organized from Germany by two departments:

International development cooperation
This department is represented in 72 countries with 64 offices in Africa , Latin America , Asia , the Middle East and at UN offices in New York and Geneva . In addition to regional and country-specific projects, she works at conferences and in studies on cross-continental international issues such as international party support, global trade union cooperation, the changed geopolitical role of large countries in globalization and the future of German foreign relations.
International dialogue
This department is represented in 36 countries with 41 offices, which are supported by the two departments Western industrialized countries and Central and Eastern Europe in Berlin. Through this network, the FES would like to create a European dialogue, show design options for an economically sustainable and social Europe, and find a common consensus in this European discourse. In addition, current foreign and security policy issues are dealt with with the aim of strengthening the European common foreign and security policy and stimulating a European dialogue on energy and climate policy challenges. The Central and Eastern Europe Department promotes cooperation with the European Union in the Balkans, the Caucasus and Central Asia . In addition, it supports the change in the formerly planned socialist countries in the region through the work areas elections and parliaments, economic and social policy, industrial relations and social dialogue, education and media policy, local policy and regional development, minority protection, foreign and security policy and the challenges of globalization.

The International Policy Analysis department also researches fundamental issues such as globalization , European integration and the transformation processes in the societies of Central and Eastern Europe. Furthermore, it deals with the strategic options of German European policy and particularly examines questions of the democratic legitimacy of the European institutions and the possibilities of their further development. The offices also work across borders on the key issues of “ European Economic and Social Model ” and “ Common Foreign and Security Policy ”. The European office in Brussels organizes the dialogue on political, economic, social and ecological issues between Germany and Europe as well as within Europe.

With the archive of social democracy and its libraries in Bonn ( library of the Friedrich-Ebert-Stiftung Bonn ) and in the Karl-Marx-Haus in Trier , the FES has one of the world's most extensive collections of documents on social history and under the umbrella of its historical research center on the history of the labor movement .

In 1973 the FES acquired the traditional SPD party publisher " JHW Dietz Nachf. ", Whose program includes numerous book series and magazines from the foundation.

Political education work in Germany is organized in a nationwide network of state offices, academies, central projects and the conference centers in Berlin and Bonn. With the main objective of promoting and strengthening social democracy and further developing the political culture of democracy, the political educational events are intended to expand the citizens' judgment and action skills. In addition, they motivate and empower people to become involved in political voluntary work and provide political advice for people in political leadership positions and mandates. In addition, the FES wants to promote the dialogue between politics and society in public forums. Every year around 2,500 events are offered in Germany, which, according to FES, reach almost 150,000 participants. In addition, the departments of Political Education, the Historical Research Center and other specialist departments (economic and social policy, etc.) publish around 500 publications per year, from brief country studies to extensive reports on economic or socio-political issues. Historical and didactic exhibitions (for example touring exhibitions for schools on right-wing extremism ) complete the offer.

The FES bundles workshops and other educational offers on journalistic topics and journalistic tools under the name FES Journalist Academy. The offers are available on the one hand to the scholarship holders of the Bildungswerk and on the other hand to journalists. There are seminars on journalistic forms of presentation such as interviews and reports, as well as internship offers in the Bundestag. Public events on media topics in cooperation with the Research Network are intended to bring the discussion about quality journalism into society.

At the general assembly in December 2018, the following board was elected:

Party-affiliated foundations at the federal level in Germany