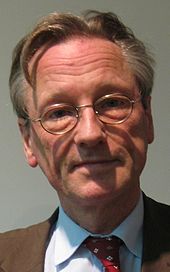 Peter Willy Brandt (born October 4, 1948 in Berlin ) is a German historian and retired professor for modern and contemporary history at the Distance University in Hagen .

Peter Brandt was born as the eldest son of Rut and Willy Brandt in Berlin. His brothers are Lars Brandt and Matthias Brandt , his older half-sister Ninja (* 1940) comes from Willy Brandt's first marriage (1941–1948) with Carlota Thorkildsen as a premarital child. Peter Brandt is married and has two children. 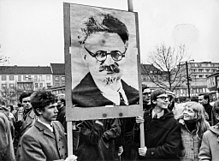 Ludwig Binder: Student revolt 1967/68, West Berlin; published by the House of History of the Federal Republic of Germany Right: Peter Brandt and girlfriend Maria during a protest march against the Polish military mission, March 13, 1968

Brandt attended the Schadow High School in Berlin . When his family moved to Bonn on December 1, 1966, following his father's appointment as Federal Foreign Minister and Vice Chancellor, he was the only family member who stayed in Berlin because he did not want to change schools shortly before he graduated from high school, which he took in 1968.

He then began studying history and political science at the Free University of Berlin . During his student days he was politically active in the student movement. As a member of politically left-wing groups, he came into conflict with his father's political positions on several occasions. In the course of several trials against Brandt in 1967, among other things because of his participation in demonstrations against the imprisonment of Fritz Teufel , these differences became public. In 1968 he was on trial for “casserole”, but not together with Teufel and Langhans, as was alleged. Brandt had an “exceptionally warm sympathy” for the student activist Rudi Dutschke , although he did not share many of his positions.

Brandt received his doctorate in 1973 from the Free University with a dissertation on the reconstruction of the German labor movement after the Second World War using Bremen as an example.

From 1973 to 1975 and from 1986 to 1989 Peter Brandt was a lecturer and freelance journalist in addition to his research activities.

In the meantime, Peter Brandt was from 1975 to 1986 research assistant or university assistant with Reinhard Rürup at the Institute for History of the Technical University of Berlin , who also supervised his habilitation thesis . In 1988 Brandt completed his habilitation at the TU Berlin with a study on the subject of student movements and early nationalism around 1800 .

Brandt has been a deputy chair since 1989, and since 1990 professor of modern history at the Open University in Hagen . At the Historical Institute of the FernUniversität he was responsible for German and European history from the 18th to the 20th century. From 2003 to 2017 he was director and is now honorary director of the Dimitris Tsatsos Institute for European Constitutional Studies at the FernUniversität and was spokesman for the historical doctoral program on social interests and political decision-making of the Hans Böckler Foundation . He was also a member of the university council of the FernUniversität, liaison lecturer of the Hans-Böckler-Foundation and the scientific advisory board Haus des Ruhrgebiets .

In addition to the usual representation of the subject in research and teaching and participation in academic self-government, Brandt has given and holds lectures at home and abroad, for example in Berlin, Bielefeld, Bochum, Göttingen, Zurich, Wroclaw, Oslo, Oxford, Birmingham, Paris, Rome and St. Petersburg.

In addition, Peter Brandt, together with Martin Kirsch and Arthur Schlegelmilch, is the editor of a manual in nine volumes with CD-ROM source edition on comparative European constitutional history since 1780, which has been published since 2004. Werner Daum is also co-editor .

As professor emeritus, Brandt publicly distinguished himself by participating in an expert opinion on the question of whether the last Prussian Crown Prince, Wilhelm Prince of Prussia, had promoted the establishment of the National Socialist dictatorship. The research controversy resulting from the different results of Brandt's report and the reports of other historians and the public debate about "the legacy of the Hohenzollerns" that sparked this controversy were considered to be "the most important historical-political conflict in the country" at the end of 2019 (Der Mirror). Jan Böhmermann published the secret reports, which are important for the Hohenzollern's compensation claims , in November 2019 for his show Neo Magazin Royale on the Internet.

In addition to his academic work, Brandt endeavors to achieve serious popularization (for example by publishing historical reading books, anniversary publications, participating in exhibitions or lectures at adult education centers, educational institutions of trade unions and political parties) as well as political engagement and political journalism in the 1980s and 1990s especially the problem of the division and reunification of Germany . He is a member of the SPD and the ver.di union . Because of his positions on nation and patriotism as well as after an interview in the weekly newspaper Junge Freiheit , Brandt received criticism. There was also internal discussion about his status as a liaison professor of the Hans Böckler Foundation.

In the issue of Junge Freiheit on February 4, 2005, he wrote an obituary for the right-wing journalist Wolfgang Venohr , who was a member of the Waffen SS in his youth . He is also one of the authors of the anthology A Life for Germany published in July 2005 by Junge Freiheit . Commemorative letter for Wolfgang Venohr 1925–2005 .

Peter Brandt was also a speaker at the Berlin fraternity Gothia and author of the national revolutionary monthly magazine We Ourselves .

He is a supporter of the left collective movement “ Stand up ”.