The publishing house has been based in Bieberhaus , Hamburg, since March 2019

The Rowohlt Verlag was founded in 1908 in Leipzig. Today Rowohlt is part of a group of book publishers in Hamburg (from 1960 to March 2019: Reinbek near Hamburg) and in Berlin . The Rowohlt publishing houses have belonged to the Georg von Holtzbrinck publishing group since 1982 .

Ernst Rowohlt founded his publishing house in 1908, with which he moved to the front building of the famous Drugulin store in Leipzig. The first book he published was Songs of the Summer Nights of his Bremen school friend Gustav Edzard, it turned out to be not for sale. His silent partner became Kurt Wolff , who after personal disputes with Rowohlt took over the publishing house in 1912 and acquired the rights of Johannes R. Becher , Max Brod , Georg Heym and Franz Kafka , among others . Paul Scheerbart , Herbert Eulenberg and Max Dauthendey were early authors . 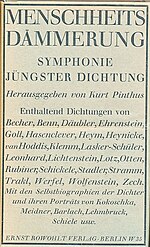 After the end of the First World War , Rowohlt started the company again on February 1, 1919 in Berlin. Editors were Paul Mayer and Franz Hessel . With Alfons Goldschmidts Moscow 1920 , Heinrich Eduard Jacobs Der Tulpenfrevel and Kurt Pinthus ' Menschheitsdämmerung , the house achieved its first successes in 1920. A year later, the first bestseller was with Carl Ludwig Schleich's sunny past. Memorabilia published 1859-1919 , which by 1966 had a circulation of over 1 million copies.

Multi-volume editions by Honoré de Balzac and Giacomo Casanova appeared in the 1920s . Emil Ludwig became a successful author in those years . The weekly Die literäre Welt (Ed. Willy Haas ) was published for the first time in 1925, and Joachim Ringelnatz had all of his poetry and prose volumes published by Rowohlt until his death in 1934. The publisher slowly discovered the Americans for his house and began to include books by Sinclair Lewis and Ernest Hemingway in his program. Other authors of the house were Kurt Tucholsky , Robert Musil , Ernst von Salomon and Leo Slezak .

The Passauerstraße 8/9 was from 1929 to the address of the Rowohlt publishing house, from 1935 on, he was sitting in the neighboring Eislebener road . In 1931 the company ran into difficulties and two-thirds had to be taken over by Ullstein . Hans Fallada's Little Man - What Now? brought the publishing house back economic upturn. The novel was adapted in Germany and the USA.

Following the seizure of power of the National Socialists 50 percent of the books of the house were confiscated, burned and banned. The publication of the work Adalbert Stifter by Bruno Adler under the pseudonym Urban Roedl led to Rowohlt being banned from his profession in 1938, as he was accused of camouflaging Jewish writers . The result was the emigration of Rowohlt and his family to Brazil in February 1939 .

The publishing house was incorporated as a subsidiary of the Deutsche Verlags-Anstalt in Stuttgart at the instigation of the state . In 1943 the company closed down for good. 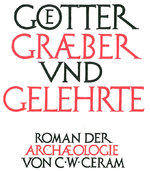 Book cover of the bestseller Gods, Graves and Scholars (1949)

On November 9, 1945 Heinrich Maria Ledig (Rowohlt's eldest son) received a publishing license from the Americans to reopen the company. This took place at Am Hohengeren in Stuttgart.

In the first few years the company published works by Kästner , Joachim Ringelnatz and Tucholsky . The magazines Pinguin and story (containing texts by foreign storytellers) were founded. The branch in Baden-Baden, headed by Kurt Kusenberg , enabled important contacts to be established with French writers such as Jean-Paul Sartre , Simone de Beauvoir , Albert Camus and Jacques Prévert . Walter Jens , Arno Schmidt and Dieter Meichsner were among the young German poets of the publishing house . The drama outside the door of Wolfgang Borchert became a sensation in 1947 and was listed at almost all students platforms.

In 1949 CW Ceram's (di Kurt W. Marek) book Gods, Graves and Scholars achieved an extraordinary success . It became a bestseller worldwide . On February 23, 1950, Rowohlt Verlag announced that it had sold around 12,000 copies within five weeks at a price of DM twelve each. The book has also been translated into 33 languages ​​and has been sold around five million times worldwide to date. The cover design was done by Werner Rebhuhn , who from then on designed the cover for many other books by the publisher.

One year after the company was founded, Ernst Rowohlt received a license for a Hamburg publisher from the English. In 1950, the editorial team from Stuttgart finally moved completely to Hamburg . A year later, in 1951, the autobiographical novel The Questionnaire by Ernst von Salomon was published, which also became a bestseller.

In 1960 the company headquarters were relocated to Reinbek . The newly built building complex of the publishing house was planned by the well-known architect Fritz Trautwein and an extension was added in 1970. The buildings have been a listed building since the end of 2003 .

Ernst Rowohlt died on December 1, 1960 and H. M. Ledig-Rowohlt took over the majority of the publisher's shares. He ran the house until 1982.

Fritz J. Raddatz became editor-in-chief and deputy publishing director under Ledig-Rowohlt in 1960, as well as editor of the paperback series rororo-aktuell. In 1969 he had to give up this function due to the so-called "balloon affair", the dropping of 50,000 copies of the memoirs of Yevgenia Ginsburg printed on behalf of Rowohlt over the territory of the GDR. Matthias Wegner was his successor .

Since 1950, the inexpensive rotary printing for paperbacks made the Rowohlt Verlag famous. Heinrich Maria Ledig-Rowohlt received the suggestion on his trip to the USA. The initial publications appeared in Hamburg from 1946 to 1949 initially in a large-format newspaper print, the first copies of which Ernst Rowohlt commented with the sentence: "I won't get anything like that."

The new print products were called Rowohlt Rotations Romane and the abbreviation RO-RO-RO. The first four titles that appeared in this format from December 15, 1946 at a price of 50 Reichspfennig each were:

From the newspaper format, the publishing house developed the new pocket books in small octave format . The volumes have become known under the name rororo - a term that has temporarily become synonymous with all paperbacks. The first titles in 1950 included:

The typesetting and rotary printing of the first editions was done by the Christian Jessen Sohn printing house in Leck , from which the large printing house Clausen & Bosse emerged. The bookbinding work using the Lumbeck method was carried out at the Hans Ehlermann company in Verden (Aller) . Those 451 volumes that were bound up to 1961 have a narrow colored linen spine as a distinctive identification mark . The publisher called this quality half-linen flexible ; the price of a paperback was around 1950 DM 1.50.

In 1955 the first volume of the rowohlts deutsche enzyklopädie (rde) paperback series was published, which wanted to depict the knowledge of the 20th century in the form of keywords and was edited by Ernesto Grassi . The last volume appeared in 1986. In March 1958 the rowohlts monographs series of biographies was brought into being under the direction of Kurt Kusenberg . In 2008, 640 titles were published. From 1999 to June 2015 the titles were offered in four-color printing . Since then, the publisher has limited itself to the sale of existing holdings and reprints as non-illustrated e-books .

On December 22, 1984, the editing department protested in an open letter against the designated publishing director Michael Naumann , journalist of the Spiegel editorial team, because they had expected the successor from their own ranks after the departure of the publishing director Matthias Wegner , namely the editor of the current Row, Freimut Duve , to be allowed to vote. However, Naumann took up his post and remained the publishing director until 1995. He was succeeded by Nikolaus Hansen , and on November 1, 1999, Peter Wilfert and Rüdiger Salat joined as independent managing directors. Alexander Fest has been the publishing director since February 1, 2002 . Fest continues to support the publisher as an "editor at large". Barbara Laugwitz was the publishing director from September 14, 2014 until her dismissal in 2018; her release at the end of August 2018 led to author protests and legal disputes. Her successor has been Florian Illies since January 1, 2019 . On January 24, 2020 it was announced that Illies would be leaving the publishing house in autumn of that year at his own request in order to be able to devote more time to writing. Two days later, the Börsenblatt quoted critical press comments on this process. On January 30th, the news came that by July 2020 at the latest Nicola Bartels , previously a publisher at the Random House publishing group , would be his successor. This is associated with rather skeptical expectations of the future of sophisticated fiction in the other publishing houses of the Holtzbrinck Group.

In March 2019 the publishing house left Reinbek and moved to the Bieberhaus in Hamburg-St. George . He occupies the third and fourth floors there.

Rowohlt Verlag , the imprint publishers Wunderlich (since 1984) and Kindler (since 2004) in the hardcover sector come together under the umbrella of Rowohlt . The Rowohlt paperback publishing house is among others to the rows Rowohlt , Rowohlt red fox , rowohlts monographs and Polaris represented. More recent imprints are Rowohlt Hundert Augen , Rowohlt repertoire and Rowohlt rotation . Rowohlt • Berlin has been an independent publisher since September 2014 , with Gunnar Schmidt as its managing director. Furthermore, the are Rowohlt Theater Verlag and the Agency for media rights connected. Rowohlt has been offering almost all of its publications as ebooks since 2009 (Rowohlt Ebook) , and there is also an ebook-only series.

Rowohlt Verlag's program is divided into the areas of fiction and non-fiction. In the non-fiction category in particular, a number of series have emerged over the years.