Fritz Joachim Raddatz's mother Alice, a “Parisian from a rich family”, died when he was born. The father was a “not unknown” man whom he later knew by name and whom he did not want to name for this reason. His stepfather was a member of Richthofen's squadron during the First World War and a member of the board of directors of the UFA film company during the Weimar Republic . Raddatz described him as aggressive and brutal, blamed him for physical abuse in his childhood and the induction of forced sex with his stepmother Irmgard.

When the stepfather died in 1946, he and his sister initially received French passports, but then the 31-year-old Protestant theologian Hans-Joachim Mund took over his guardianship. This began with the fifteen-year-old Raddatz - according to his description - an affair. Raddatz passed his Abitur at the Askanische Oberschule in Berlin-Tempelhof. Like his guardian, Raddatz went to East Berlin in 1950 out of political conviction . There he studied German , history , theater studies , art history and American studies and passed his state examination at the Humboldt University in Berlin in 1953 . In 1958 the doctorate followed .

As a twenty year old Raddatz wrote for the Berliner Zeitung . From 1953 to 1958 he was head of the foreign department and deputy editor- in- chief at the publishing house “ Volk und Welt ” in East Berlin . After long conflicts with government and party authorities in the GDR , he moved to the Federal Republic in 1958. In 1971 he completed his habilitation under Hans Mayer at the University of Hanover .

In 1960 he became editor-in-chief and deputy publishing director of Rowohlt Verlag under Heinrich Maria Ledig-Rowohlt and editor of the paperback series rororo-aktuell. In 1969 he had to give up this function due to the so-called "balloon affair", the dropping of 50,000 copies of the memoirs of Yevgenia Ginsburg printed on behalf of Rowohlt over the territory of the GDR. From 1976 he was head of the feature pages of the weekly newspaper Die Zeit . In 1985 he left this post after using false quotations from Goethe in an editorial, but continued to work as a cultural correspondent for this newspaper. The wrong quote was noticed because he did not take it from Goethe's works, but from a gloss in the Neue Zürcher Zeitung (which was a satirical contribution).

On the basis of the diaries he has kept since 1982, he published the troublemaker's commemorative volume in 2003 ; the diaries themselves were edited in 2010 and 2014.

Raddatz was considered one of the most influential German literary critics; According to Hellmuth Karasek, his diaries are a panopticon of the West and East German publishing and authoring scene after 1945. In addition to his journalistic work, he published a large number of essays, novels and biographies.

He was openly bisexual, by his own admission, mostly with male partners, and lived in Hamburg with his partner Gerd Bruns for more than 30 years, 13 of them in a registered partnership .

In September 2014, Raddatz announced that he wanted to withdraw from active journalism. The reason for this is that he no longer feels up to date. The current poetry and the contemporary novels are no longer interesting for him and, above all, no longer lovable.

Raddatz 'grave in Keitum on Sylt

To his long-time friend Arno Widmann , he said: “At some point there has to be an end”. Raddatz wanted to determine the end of his life himself. He had long been a believer in assisted suicide and considered it a worthy way to end life. It was important to him: "Not to wait until the stroke comes, to sink into a strange darkness into which no one can penetrate". So Raddatz chose accompanied suicide, which is legal in Switzerland. He died on February 26, 2015, the day before his last book, Years With Single, was published. A memory in Dignitas' “death house” on the banks of the Pfäffikersee . His grave is in the Keitum cemetery on Sylt , where he had bought the grave site and the tombstone years before his death.

Fritz J. Raddatz was chairman of the Kurt Tucholsky Foundation , member of the PEN Center Germany and the Hamburg Free Academy of Arts . 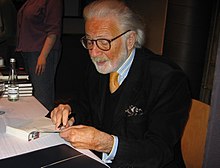