The title of this article is ambiguous. Further meanings are listed under Essay (disambiguation) .

The essay (plural: essays ), also called essai , is a witty treatise in which scientific, cultural or social phenomena are considered. The focus is on the author's personal engagement with his respective topic. The criteria of scientific methodology can be neglected; the writer (the essayist ) thus has relatively great freedom.

Similar types of text, sometimes also used synonymously, are tracts , essays and (outdated) causeries . Related journalistic forms of representation are the gloss , the column , the journalistic commentary and the leading article .

In view of the wealth of ideas in a good essay, one can consider the essay to be the “big brother” of the aphorism .

The French expression essai , like the Italian saggio and the Spanish ensayo, comes from the rarely used late Latin noun exagium (“the weighing”, “the weight”), which in particular means “the shot samples which the emperors of the 5th century take from each new one Have a coin strike presented, denotes 1/6 of an ounce, = 1 solidus ”and is derived from the frequently used verb exigere (including“ examine ”,“ examine ”,“ assess ”,“ weigh ”,“ consider ”). 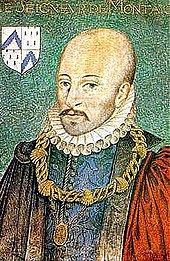 The essay as a literary form or genre goes back to the French author Michel de Montaigne (1533–1592). Montaigne developed the essay from the Adagia of Erasmus of Rotterdam . What is still a collection of sayings, aphorisms and wisdom in this one , Montaigne now provides with comments and criticism. In doing so, out of a skeptical attitude, he contrasts his experiences and considerations with the scholastic claim to absoluteness.

Montaigne appears as a questioner who searches for answer (s) (and ultimately does not find them). A good essay raises new questions and / or outlines a new problem. Findings and demands are often only elaborated so far that the reader can associate them himself and view them as his own thoughts (suggestions), not as a dogmatic doctrine.

Montaigne's commitment to subjectivity and his doubts about the existence of absolute truth contradicted the official doctrine of the Vatican at the time . In 1559 the Vatican first published an index Librorum Prohibitorum ; Montaigne's essays ( Les essais ) were placed on the index in 1676 (that is, 84 years after his death).

His successor, the Englishman Francis Bacon , expanded the genre of the essay in the direction of an instructive, moralizing form with deductive evidence; as a result, the essay oscillates between these two orientations. The essay thus became a popular literary form of moralists and enlighteners .

The encyclopedists adapted the originally literary-philosophical form to a scientific style. In contrast to a treatise or a scientific treatise, an essay dispenses with objective evidence and definitive answers. But that does not rule out taking sides, as in Virginia Woolf's essay “A Room of Your Own”, in which she advocated women's rights, or Jonathan Lethem , who pleaded for a generous approach to copying ideas in “Confessions of a Stacker”.

In his text Curriculum Vitae III , Walter Benjamin interpreted his essays as follows: “Your task is to promote the integration process of science [...] through an analysis of the work of art, which in it is an integral expression of the religious, metaphysical, recognizes political and economic tendencies of an era. "

The essayistic method is an experimental way of approaching the object of reflection and looking at it from different perspectives. The most important thing, however, is not the subject of reflection, but the development of the thoughts in front of the reader.

Many essays are characterized by a certain lightness, stylistic sophistication, comprehensibility and humor. Each new term is introduced and introduced. Actions are told chronologically and quotations are clearly marked; but mostly it is exempt from many quotations , footnotes and marginal notes. Sometimes it is simply a stylized, aesthetic chat.

While the author of a scientific analysis is required to present his topic systematically and comprehensively, an essay is written more dialectically : with rigor in the methodology , but not in the systematics. Essays are attempts at thought, interpretations - impartial, often seemingly random. In order for an essay to be convincing, it should be sharp in thought, clear in form and supple in style (see also language level , style , rhetorical figure ).