This article deals with the subject of international law. This article is not to be confused with Vatican City 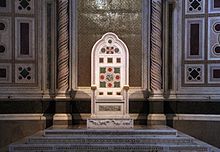 The Holy See ( Latin: Sancta Sedes ), also Apostolic See ( Latin: Apostolica Sedes ), Papal See or See of Peter , is the episcopal see of the Diocese of Rome ; Otherwise only the cathedra of the diocese of Mainz (Sancta Sedes Moguntina ) is referred to as the Holy See . As a non-state sovereign power, it is a separate subject of international law and represents the State of Vatican City and the Roman Catholic Church in international relations . In addition to the Pope as a personal representation, the Holy See also includes the administrative institutions of the Roman Curia .

The interdependencies between the Holy See, Vatican City, papacy and the Roman Catholic Church are far-reaching and cannot always be clearly distinguished. In colloquial usage, the Vatican usually means the Holy See or its administrative organs.

The term chair is derived from the bishop's cathedra , a symbol of the authority of a public official that has been handed down since ancient times . The bishopric in Rome is traced back to the legendary founding of a first Christian community by the apostle Peter , which is why he has a special position in the whole of Christianity ( papal primacy , pentarchy ). In the old church , the term holy see was used synonymously with episcopal see for each bishopric, it was only later that it focused on the particularly important Roman bishopric and has been referring almost exclusively to this since the 19th century.

Apostolic indicates the connection to the apostles appointed by Jesus who follow him . The origin goes back to the New Testament : "You are Peter , and on this rock I will build my church ..." Gospel according to Matthew (16.18 EU ). The apostolic see was initially understood to mean all bishopric seats that were in direct apostolic succession. Among them, Alexandria , Antioch , Jerusalem and Rome had priority as patriarchal seats. In addition to Rome, only the diocese of Mainz still bears the name Holy See .

This view was later used for the Roman bishopric. As a result, the Apostolic See was linked more and more to the successor of Peter and his successors as Bishops of Rome ( Sedes Apostolica Romana ). In the 7th century the term ecclesia universalis (universal church) concentrated more and more on the ecclesia romana (Roman church) and was thus limited to the occidental form. Since Pope Damasus I (366–384), the conviction developed that only the Bishop of Rome could claim to sit on the Holy See of Rome. With Pope Siricius (384-399) solidified the sole title Pope on the designation of the Bishop of Rome. From this emerged with Pope Leo I the Great (440–461) in succession the title Vicarius Christi , who put the Holy See in Rome on an equal footing with the Roman Empire.

The diocese of Rome extends beyond the borders of the Vatican to Italy, the Pope is the bishop of this Holy See .

The Holy See in international law

The Holy See is not identical with the Catholic Church , which is a separate legal entity. The Catholic Church itself is not a subject of international law, but the Pope, or rather the Holy See, represents it as head externally and can thus represent its interests in diplomatic dealings.

As such, the Holy See (and not the Vatican State) is a member or observer in various international organizations. The Holy See is admitted as a permanent observer at the United Nations . With the reform of the United Nations in 2004, the member states granted the Holy See more rights in the UN General Assembly. He may intervene in the debate at the annual plenary meeting without having to wait for the permission of other states, and has the right to answer as far as the Holy See is concerned.

The Holy See has the oldest diplomatic service in the world. Therefore the Pope in many (mostly Catholic) countries Nuncio of the Doyen of the Diplomatic Corps and is on record in the first position of the foreign accredited ambassador . The Holy See maintains diplomatic relations with 183 states including the European Union and the Sovereign Order of Malta (as of 2020). Foreign diplomats who are to be accredited to the Holy See and who apparently do not live according to Catholic sexual ethics can be rejected, for example divorced people or people living in same-sex partnerships.

The Holy See has not acceded to various international conventions, including the European Convention on Human Rights of 1950, the International Covenant on Civil and Political Rights (UN Civil Pact) of 1966 and the Istanbul Convention of 2011 to prevent and combat violence against Women.

The daily newspaper L'Osservatore Romano is published by the Holy See . In addition, the international radio station Radio Vatican was operated by the Holy See. The Italian variant of the name La Santa Sede for German  The Holy See is preferred by w2.vatican.va, the institution's website.

The emblems of the Holy See are the keys of Peter and the tiara ; compare with the coat of arms of the Holy See .
Right picture: Allegory of the papacy - Peter as Pope sitting on the Holy See, the key and the Bible (as iconographic attributes of Peter) in hand, the tiara as the insignia of a Pope, the other hand raised in a three-fingered gesture of blessing (as the representative of Christ ).