Curia is a redirect to this article. Further meanings are listed under Curia (disambiguation) .

As Roman Curia which is since about the 11th century the whole of the management and administrative organs of the Roman Catholic Church called.

The term “curia” comes from the Latin word curia and is associated with the term “building for Senate assemblies in Rome” or with the general term “town hall”. Today it is understood to mean the entirety of the papal authorities. The decree of the Second Vatican Council, Christ Dominus (CD 9), says: “In exercising the highest, full and direct power over the Church as a whole, the Pope uses the authorities of the Roman Curia. These consequently provide their office in his name and with his authority for the good of the churches and as a service that they render to consecrated shepherds ”. The pastoral task of the papal authorities, which Pope John Paul II (1978–2005) explains in the introduction to the apostolic constitution Pastor Bonus , relates “to the necessary relationship and connection between the Petrine ministry and the ministry and ministry of the other apostles [...], and not just like a symbol, but actually ”.

Development since the 11th century

Under Gregory VII (1073-1085) the curia was redesigned according to the model of a royal court and expanded into a large ruling apparatus under the motto “freedom of the church”. The church had its own staff and administration, which worked according to its own rules. These new regulations were also related to the election of the Pope , because the first right to vote was introduced as early as 1059 , according to which a committee of cardinals elected the Pope.

Pope Innocent III (1198–1216) was the first Pope to see himself as “Christ's representative on earth” and defined Christianity as a unity that could ultimately only be led by the Pope. But he was also the first to speak of the need to distribute the burden of apostolic work among other confreres. In 1198 he addressed the following presentation to the bishops and prelates of Gaul :

"Because the fullness of the ecclesiastical authority that has been conferred on us by the Lord has made us debtors to all believers in Christ, we cannot multiply the state and order of human life [...] Because the law of human life does not allow this, we cannot bear the burden of all worries in our own person either, but we strive to do that with the help of our brothers, who are members of our body, which we would much rather do personally if the expediency of the Church allowed it. "

Under Clement VI. (1342-1352) a renewed development of power of the Curia took place. The Pope, who resided in Avignon , developed the French city into a financial and judicial church center. Most of the Curia officials lived in Avignon outside the Papal Palace . Accommodation and representative buildings had to be built for them. The members of the Curia in Avignon did not remain purely church administrators, but developed in parallel to art patrons and art collectors.

The camera secreta , founded under Martin V (1417–1431), can be seen as the forerunner of today's State Secretariat . She was initially responsible for handling the Pope's confidential correspondence, but took on increasingly extensive administrative tasks in the centuries that followed.

In 1542 Paul III. (1534–1549) the Inquisition was the first cardinal commission to meet repeatedly. Further commissions with clearly defined areas of responsibility followed. Their regular meetings soon developed into constantly active administrative structures in which continuously working clerics replaced the cardinals.

In 1588 Pope Sixtus V (1585–1590) was the first to create a unified form of organization with the Constitution Immensa Aeterni Dei by structuring the existing authorities and setting up the congregational system consisting of 15 congregations. This creation of a uniform administrative system for the universal church and the papal state is considered to be the hour of birth of the Roman Curia. Nevertheless, over the centuries there have been repeated changes in the office structure of the Curia and shifts in areas of responsibility.

In 1908 Pope Pius X decreed a strict separation between administrative authorities and courts with the apostolic constitution Sapienti consilio . In 1967 Pope Paul VI came. (1963–1978) responded to the council's invitation and issued the apostolic constitution Regimini ecclesiae universae, a comprehensive reform of the Curia, which roughly specified the current structure of the Curia.

The current Codex Iuris Canonici from 1983 defines the role of the Curia as follows:

“The Roman Curia, through which the Pope is in charge of the affairs of the universal Church and which exercises its task in his name and authority for the good and service of the particular Churches, consists of the State Secretariat or the Papal Secretariat, the Council for Public Affairs the Church, the congregations, the courts of justice and other institutions whose order and jurisdiction are determined by special law. "

Pope John Paul II (1978–2005) gave the Curia its current face in the Apostolic Constitution Pastor Bonus in 1988 , but at the same time repeatedly admitted the need for reforms , most recently in his letter Novo Millennio Ineunte (2001): “What the Reform of the Roman Curia […] concerns […], there is certainly still much to be done. "

The Curia in the 21st Century

Pope Francis , elected on March 13, 2013, temporarily confirmed the heads and members of the dicasteries of the Roman Curia in their offices on March 16, 2013, as well as secretaries and the president of the Pontifical Commission for the Vatican State. On April 13, 2013 it was announced that Pope Francis had set up a commission of eight cardinals with the Cardinals Council to prepare a fundamental structural reform of the Curia.

In May 2014, Pope Francis determined that all cardinals who head a dicastery or a papal council or hold another office conferred by the Pope should now resign when they turn 75. The offices of the other heads of dicasteries, the offices of secretaries and the offices assigned by the Pope to bishops automatically end when this age limit is reached. “Under special circumstances” the Pope can ask a bishop to submit a request for resignation even before reaching the age limit.

In his Christmas address in 2014 to the Curia, Pope Francis cited “diseases and temptations” that weakened devotion to the service of God, such as the temptation to consider oneself irreplaceable, “existential schizophrenia” or “spiritual Alzheimer's.” The unusually sharp ones According to observers, public criticism by Pope Francis of the Roman Curia is a sign that there is considerable opposition in the Vatican to the reform plans, both within the Curia and for fundamental positions of the Catholic Church.

On December 23, 2016, Pope Francis named twelve criteria for the further restructuring of the Curia in his Christmas address: individuality, pastoral care, missionary spirit, rationality, functionality, modernity, simplicity, subsidiarity, synodality, catholicity, professionalism and graduality. The Pope complained that, in addition to constructive criticism, there was fear, indolence and “malicious resistance” from a “twisted spirit” in the Curia. This type of refusal to reform comes from… “often in sheep's clothing”, hiding “behind justifying and in many cases accusatory words” and taking refuge “in traditions, appearances, formalities, in the familiar”.

According to the La Croix newspaper , Pope Francis is said to have signed the new constitution Praedicate Evangelium in July 2020.

Connections with the State of the Vatican City

Government Palace in the Vatican

The government of the Vatican City State must be strictly distinguished from the Curia, which is responsible for the direction and administration of the Church as a whole, under international law. However, this is not always easy and clear, as there are certain institutional links. The very fact that the Pope has six different budgets makes it clear how entangled responsibilities can sometimes be.

Since 1984 the Cardinal Secretary of State has been entrusted with the permanent representation of the Pope in the secular administration of the Vatican State . However, the government is de facto in the hands of seven Kurienkardinälen existing Pontifical Commission for Vatican City State . She is appointed by the Pope for five years and is mainly responsible for determining the financial and budgetary policy of Vatican City. The President of the Commission (at the time Giuseppe Cardinal Bertello ) can be seen as a kind of head of government . The General Secretary with the Governorate of Vatican City , responsible for central administration, reports to the Commission.

A small part of the offices of the Curia administration are located on the territory of the Vatican; the other administrative departments are located in other places in Rome, mostly on extra-territorial areas , but sometimes also in ordinary Roman urban areas.

The Roman Curia consists of the dicasteries , which include the secretariats, congregations, courts of law, papal councils and offices of the curia, as well as other institutions that do not have the status of a dicastery. 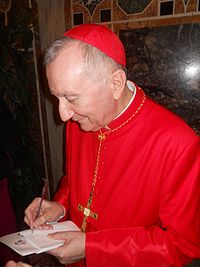 The most important political institution is the State Secretariat , which is headed by the Cardinal Secretary of State . As the first collaborator of the Pope in the leadership of the universal Church, the Cardinal Secretary of State can be considered the highest representative of the diplomatic and political activities of the Holy See, which in certain circumstances represents the person of the Pope himself.

The first section takes on the final editing and delivery of all correspondence from the Curia, monitors and coordinates the activities of the other dicasteries and papal authorities, compiles statistics and is responsible for the media work of the Holy See. The papal missions abroad are also headed by the first section, in particular with regard to their contact with the local churches, and it also conducts negotiations with the diplomat who is accredited to the Vatican . Incoming and outgoing mail is processed by departments assigned to eight different languages.

The second section is responsible for all matters relating to relations with other countries and international institutions that are not regulated independently by the respective representations of the Holy See in the respective countries. She also represents the Pope's interests at international congresses and negotiations. In countries with concordats , the Second Section negotiates the appointment of bishops. Most of the papal diplomatic corps works in this section, but the staff often move to representations around the world. The State Secretariat currently has almost 150 employees, including laypeople in the lower ranks , plus numerous external consultants.

The establishment of an economic council and an economic secretariat was ordered on February 24, 2014. Her areas of responsibility include financial oversight of the Curia, the Dicasteries, the Holy See and the Vatican City State, and the administration of the Vatican's assets.

The congregations are administrative organs of the Curia, subdivided into subject areas, somewhat comparable to the ministries of a secular government. They have a collegial structure and are headed by a cardinal prefect and two secretaries. The first permanent congregation was that of Pope Paul III in 1542 . formed Congregatio Romanae et Universalis Inquisitionis , later briefly called Sanctum Officium , then called Congregation for the Doctrine of the Faith.

The congregations at a glance:

Each congregation has a staff of around 25 employees. Although decrees of the congregations are signed by the respective prefect, the relevant decisions were made beforehand by cardinal committees, sometimes with the involvement of local bishops and chaired by the Pope.

The Roman Curia has three courts of justice:

Commission for Religious Relations with Judaism

Pontifical Commission for the Cultural Goods of the Church

The papal councils for the laity and for the family were incorporated into the newly established dicastery for laity, family and life on September 1, 2016 . The pontifical council for the Pastoral Care of Migrants and Itinerant People , the Health Pastoral Care , Justice and Peace and Cor Unum went with the decree Humanam progressionem from August 2016 1 January 2017 in the dicastery for the service in favor of the integral development of man on .

Other institutions related to the Roman Curia

Papal delegations to the basilicas

Dicasteries of the Roman Curia

Political systems of the states of Europe