Vaticana is a redirect to this article. For the asteroid of the same name see (416) Vaticana .

In addition to the newer holdings, the library now has over 150,000 manuscript volumes , including 75,000 literatures, over 8300 incunabula , over 70,000 maps and engravings as well as 200,000 autographs , as well as over 300,000 coins and medals . In total, the Vatican Library today has more than two million books and manuscripts. Attached to the library is the Vatican Library School , which not only trains the Vatican librarians. The library also has a laboratory for the restoration and facsimile of important manuscripts.

The Vatican Library sees itself as both an institution for preservation and research. She defines her duties as follows:

The origins in late antiquity and the Middle Ages 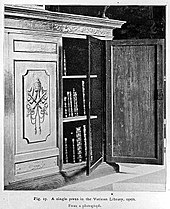 Bookcase in the Bibliotheca Vaticana

The beginnings of a Vatican collecting activity can be dated back to the 4th century. The collection of writings was placed under the care of the Primicerius Notariorum in the 6th century . The Primicerius Notariorum was the State Secretary or Prime Minister of the Pope. Finally, towards the end of the 8th century, the Vatican's first librarian was appointed. He also acted as a kind of chancellor of the Vatican.

However, this early collection of scriptures was lost during the 8th century, the reasons for this are unknown. In the same century, however, the compilation of a new collection began. The political turmoil at that time meant that the collection often had to be moved to other locations. First it was brought to Perugia , from there to Assisi and finally to Avignon . At this critical time the collection was under the protection of Pope Boniface VIII ; when he died in 1303, a large part of the inventory was again lost.

Pope John XXII, elected in 1318 . eventually began compiling the Vatican's Third Library. This collection of fonts passed into the possession of the Borghesi dynasty during the 17th century, was returned to the Holy See in 1891 and is now part of the Vatican Library.

The creation of today's collection during the Renaissance

Shortly after the death of Pope Nicholas V, an inventory of around 1500 works, which was impressive for the time, made the Vatican's collection one of the largest in Europe. 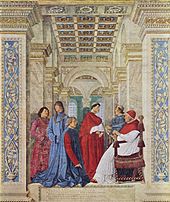 On June 15, 1475, Pope Sixtus IV issued the papal bull " Ad decorem militantis Ecclesiae ", thereby providing the library with a legal structure. He also appointed the humanist Bartolomeo Platina as the first librarian of the more modern Vatican Library. Three assistants worked at his side. In the following time the stock continued to grow. In 1475 the number of recorded works was already 2527, in 1481 there were 3500. At this time, in 1481, the library was expanded extensively. Four new rooms of different sizes were built. Each was given a name according to the works kept there. The Greek and Latin libraries for works in these languages, the secret library for works that are not accessible to everyone, and finally the Pontifical Library. The writings could be viewed on site, but this was done under strict supervision and regulation.

New building of the library from 1587

In 1587 Pope Sixtus V commissioned the architect Domenico Fontana to build a new building for the library. The new building was to be larger than the old one to accommodate the constant growth of the library. It was built right across from the old library. This is how the Salone Sistino was created , a room richly decorated with frescoes. Its dimensions are seventy meters in length and fifteen meters in width. Wooden cabinets specially designed for this purpose were built to store the manuscripts. Pope Sixtus V laid down special rules for the use and storage of the manuscripts.

Inventory regulation and cataloging since the 17th century

At the beginning of the 17th century, Pope Paul V ordered the archival documents to be moved to a separate building. With this began the story of the Vatican secret archives , which are located behind the gate of Saint Anne. All the volumes located there, such as Galileo's Discorsi or Dialogo, are kept in hermetically secure book vaults. At this time, the library began to organize its holdings according to the system that has remained almost unchanged to this day. Also at the beginning of the 17th century, the practice emerged of acquiring complete libraries, both from private and royal property, and adding them to the Vatican library. For example, in 1623 the Heidelberg library, the Bibliotheca Palatina , was given to the Vatican by the Duke of Bavaria as a thank you for the Vatican's help in the Thirty Years' War after he had captured it. In the following years, the manuscripts of the Duke of Urbino (1657) and the collection of Queen Christina of Sweden (1689) were added.

Modernization in the 19th and 20th centuries

In 1855, the collection of printed works was expanded on a large scale with the acquisition of Leopoldo Cicognara's collection . Furthermore, the libraries of the Princes Borghese (1891), the Barberini and the Fondo Borgiani from the library of the Propaganda Congregation with printed works and manuscripts (1902) were added. The following acquisitions include the Biblioteca Chigiana (1923), the archive of the chapter of St. Peter (1940), which, in addition to manuscripts, primarily contains archival materials and forms the basis of an archivi section . The last major addition is the collection of manuscripts, documents and autographs by the Italian legal historian Federico Patetta (1867–1945).

With the election of Pope Leo XIII. the process of modernization was initiated, which found a convinced employee in Prefect Franz Ehrle . He was responsible for the opening of today's reading room for printed books and the establishment of the laboratory for the restoration and facsimile of important manuscripts. In addition, a precise regulation for the creation of catalogs for manuscripts was introduced, which is still valid today. As a result, a large number of catalogs were created according to these specifications. After the First World War, the procedure for cataloging printed works was standardized with the “Norme per il catalogo degli stampati” (norms for cataloging printed matter). These standards, which are based on the Library of Congress system , have subsequently been reprinted frequently and translated into numerous languages. In recent years, a large underground storage facility for the storage of manuscripts and a new reading room for periodicals (magazines) have been built.

The possibility of using the library is very popular, so that it often happens that books are wrongly listed or even disappear completely. To remedy this situation, the Vatican Library is now using RFID technology. With the help of the RFID labels, finding wrongly placed books is made much easier.

The library was closed on July 14, 2007 to carry out urgent structural renovation work. It has been open to the public again since September 20, 2010.

Digitization of manuscripts in the present

In 2010, the library started digitizing its 80,000 manuscripts on a trial basis. At the end of the projected 10 years, the approximately 40 million pages should be available in high resolution with a total of 45 petabytes in FITS format. The first manuscripts have been digitized online since January 23, 2013. Around 2,000 manuscripts and incunabula had been digitized by 2018. 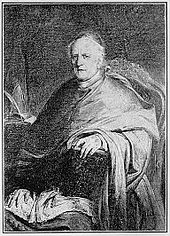