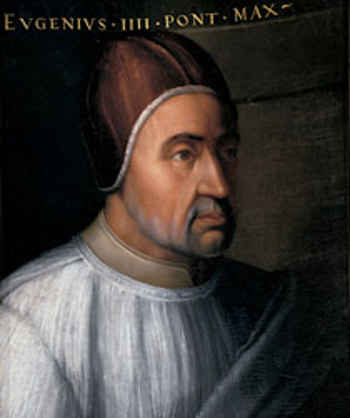 Eugene IV (* 1383 in Venice ; † February 23, 1447 in Rome ), originally Gabriele Condulmer , was a Roman Catholic Pope from March 3, 1431 until his death . The Council of Basel fell into his pontificate , which , together with the split off Council of Ferrara / Florence, was to last until 1449 and was connected with political unrest within the church.

Gabriele Condulmaro (also Condulmer) was the son of a wealthy merchant of Venice and through the maternal family line as the nephew a nephew of Pope Gregory XII. Early on he entered the monastery of San Giorgio in Alga, his hometown, and became an Augustinian canon . In 1407 his papal uncle appointed him Bishop of Siena , but he was unable to establish himself in this position due to his youth. Just a year later, in 1408, he was appointed cardinal priest of San Clemente and thus one of four cardinal nephews.

The conclave in the Santa Maria sopra Minerva elected him on March 3, 1431 in Rome as the new Pope. His coronation took place on March 11, 1431 in Alt-Sankt-Peter, the predecessor of today's Vatican St. Peter's Church . His pontificate was marked by secular and theological struggles. So he had neither the unmistakable determination nor the sovereign willpower which the problems of the time needed. It is true that on July 23, 1431, the council appointed by his predecessor opened in Basel . Instead of devoting himself to the work of the council and its reforms, however, Eugene began a war against the Colonna , who were the nephews of his predecessor. He also declared the assembly in Basel on December 18, 1431 dissolved and eighteen months later called a new council in Bologna . As a result, an anti-pope mood spread in the Basel Council. The council found support from King Sigismund and the other secular powers. Protected by the German king, the council, based on the Constance decree Haec sancta synodus, declared the sovereignty of the councils over the pope to be established. The council participants were supported by Nikolaus von Kues in his work De Concordia Catholica , although he actually advocated a middle ground between extreme papalism and extreme conciliarism . But in the subsequent struggle between the Pope and his primacy and the democratic idea of ​​conciliarism, the Pope was ultimately to remain the victor.

King Sigismund led five crusades against the Hussites . He was crushed in all of them. But then the Hussites split into radical Taborites and moderate Utraquists . The Utraquists reached a compromise with the council against Eugen's will. On May 31, 1433 he crowned King Sigismund in Rome as emperor. On November 30, 1433, the council proposed the so-called compacts (contracts) based on the demands of the Utraquists. On December 15, 1433, at the urging of Emperor Sigismund, the Pope again recognized the Basel Council as legal. After the Utraquists had defeated the Taborites, opponents of this compromise, on May 30, 1434 in the Battle of Lipan , they recognized the compacts of the Council and Emperor Sigismund as King of Bohemia on July 5, 1436 in the Diet of Jihlava . This event is considered to be the actual hour of birth of the Hussite Church.

On May 29, 1434, Pope Eugene had to flee Rome disguised as a monk after a revolt. The trigger for this revolt was his actions against the Colonna and his attitude to the council. The uproar was also fueled by Filippo Maria Visconti , a bitter enemy of the Pope. The Pope went into exile in Florence for nine years. There he appointed the former robber captain and condottiere , Giovanni Vitelleschi, cardinal. This established a reign of terror in Rome and devastated Lazio . The Pope's “beloved son” was murdered in the Castel Sant'Angelo at the beginning of April 1440 . He acted relentlessly against any violation of celibacy . The Carmelite Thomas Conecte (also called Thomas von Rennes) had Eugene IV tortured and burned in 1433 or 1434 when he opposed Vitelleschi's support.

Three years after his escape from Rome there were new conflicts between the Pope and Rome. The disputes revolved around the efforts of the Byzantine Emperor John VIII for unity with Rome. He believed that through unification he could save his empire, a territory enclosed by the advancing Ottomans and shrunk to a city-state. The council now wanted to outdo the Pope and began negotiations with John separate from the Pope. When the majority of the council planned to move the deliberations to Avignon - which would have meant a renewed French papacy - the pope allied himself with some of the council members who would rather see an Italian city as the seat of the council. This group was in the minority and left the Basel Council on March 7, 1437. On December 9, 1437, Emperor Sigismund died and on March 18, 1438 the Habsburg Albrecht II was elected King of Germany. With the death of Emperor Sigismund, who had always avoided a break between the Pope and the Council, the Council of Basel lost one of its most important pillars. In a flash, the Pope convened his own council in Ferrara on December 30, 1437 , under the pretext of wanting to relocate the Basel Council, and had it opened on January 8, 1438.

After a tug-of-war for the Byzantine delegation and the transfer of the cardinal legate Giuliano Cesarini and the strongest spiritual power of the Basel Council, Nikolaus von Kues, to the side of the Pope, Emperor Johannes decided on Ferrara . Pope Eugene met Patriarch Joseph II in Ferrara . This was the last meeting of a Pope with an Eastern Patriarch until the 20th century (see Paul VI ).

In response to the refusal to move the Council to Avignon, France issued the Pragmatic Sanction of Bourges on July 7, 1438 , which supported the Council of Basel and conciliarism. This convention laid the foundation for Gallican freedoms in France .

After the papal council was moved to Florence on January 16, 1439, due to financial difficulties, the last church union with Byzantium came about. 1052 years after the Second Council of Constantinople and fourteen years before the fall of the Byzantine Empire, an agreement was also reached on the filioque . To this end, the primacy of the Catholic Church and its head was again emphasized. The ambassadors of Emperor John VIII, who was hard pressed by the Ottoman Turks and hoped for Western military aid, agreed to far-reaching demands for the adoption of Western customs and beliefs. On July 6, 1439, the Union was officially concluded with the signing of the Laetentur coeli decree in the main church in Florence . Like the church union of 1274 at the 2nd Council of Lyons and of 1369, this union did not last long. It was still strictly rejected by the Byzantine clergy because of the atrocities for which the Western Church was responsible during the Fourth Crusade . Mark of Ephesus (Mark Eugenicus, Archbishop of Ephesus ) organized the church resistance against the forced union and refused to sign . The hoped-for military aid did not materialize anyway. At a synod in Jerusalem, the Eastern Patriarchs voiced the anathema about the United Greeks, forcing Emperor John to return to Orthodoxy. The renewal of the Union by Emperor Constantine XI. , Brother and successor to Emperor Johannes in 1448, remained meaningless as the Turks took the besieged city of Constantinople on May 29, 1453 and the last Byzantine emperor fell. Many Greeks blamed the “wrath of God” on the false union for the conquest. That is why the Church Union of Florence was officially dissolved again in 1484.

The Basel Council responded to the summoning of the Council of Florence on June 25, 1439 with the removal of the Pope. On November 5, 1439, Amadeus VIII, Duke of Savoy , raised Felix V to be the last antipope in history to this day.

In Naples , on June 2, 1442, Alfonso V of Aragón became King Alfonso I of Naples after his victory over the other claimants to the throne. On September 28, 1443, the Pope returned from Florence to Rome with the satisfaction of having reunited the Monophysite and Monotheletic Armenians (November 12, 1439) and the Jacobites (February 4, 1442 through the bull Cantate Domino ) with the Catholic Church . In Rome on September 30, 1444 and August 7, 1445 the Nestorians , Syrians , Chaldeans and Maronites were reunited.

Eugene IV died on February 23, 1447. He was first buried in St. Peter's Church at the Vatican . When the church was rebuilt in the 16th century, his remains were lost; Parts of his grave monument (fig.) Ended up in the Roman church of San Salvatore in Lauro .

Despite the troubled political conditions, Eugene IV became an important sponsor of architecture, art and science. He further opened the papal court to humanism and the early Renaissance . He continued the urban renewal of Rome already begun by his predecessor Pope Martin V. The sculptor Antonio Averlino, called Filarete , created a monumental bronze door for Eugene IV, which is still the main portal of St. Peter's Church in Rome today. The painters Antonio Pisanello , Jean Fouquet and Fra Angelico also worked for the papal court .

Pope Eugene IV and the Catholic-Orthodox Church Union of Florence in 1439 and their aftermath are described in Barbara Goldstein's historical novels The Forgotten Pope , The Shrine of God and The Ring of Solomon . Pope Eugene IV is also one of the protagonists in the historical novel Nuori Johannes by the Finnish author Mika Waltari, published posthumously in 1981 (the German translation was published in 2013 under the title Johannes Peregrinus ). The novel contains u. a. a detailed fictional presentation of the Union Council of Ferrara / Florence.

In the miniseries The Medici - Rulers of Florence , Eugene IV is portrayed by British actor David Bamber in 2016 .