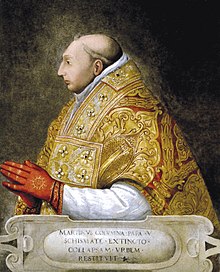 Pope Martin V (copy of a painting by Pisanello )

Pope Martin V was buried on February 20, 1431 in the Basilica of San Giovanni in Laterano . His grave was opened in 1853 and moved to its current location. Today it is covered with a glass plate on which pilgrims like to throw coins and bills.

Oddo Colonna was the son of Agapito Colonna and Caterina from the Conti family . He studied law in Perugia and worked under several popes in various functions (for example as apostolic protonotary ). From the consistory of June 12, 1405 he was cardinal deacon of San Giorgio in Velabro . He broke with membership of the Roman faction during the schism in 1408 and was also involved in the Council of Pisa .

As a cardinal he led the investigation against Jan Hus from 1410 .

On November 11th (Martinstag) 1417 he was by 23 cardinals and 30 delegates of the council, after the deposition of John XXIII. in Pisa , Gregory XII. in Rome and Benedict XIII. in Avignon , elected Pope during the Council of Constance (one of the two papal elections in Germany). As a name he chose that of the day's saint ( Martin von Tours ). On November 21, 1417 he received the papal crown ( tiara ) after he had only been ordained after his election as priest and bishop .

Even during the long vacancy after Pope Gregory's abdication on July 4, 1415, the council members were arguing about the urgently needed reforms after the long schism. But the indecision of the council participants as well as the beginning moral decline of the church and the council prevented this. On the latter, haunting sermons from this period have been handed down. On April 6, 1415, the council defined the suzerainty of the councils over the pope in the decree Haec sancta synodus .

From the beginning, Pope Martin, contrary to this, aimed at a renewal of the primacy. In doing so, he completely ignored the core problems of the reform. Nor did he ever intend to confirm the decisions of the Council. There were considerations to move the Curia to Germany or back to Avignon. But that would have meant that the newly liberated papacy would have had to submit to national interests again. Martin therefore rejected both requests.

Joan II of Naples still occupied Rome with her troops. In addition, the Papal States had again sunk into complete chaos. After Martin therefore had to initially reside in Mantua and Florence , he did not move into Rome until three years after his election on September 29, 1420, after the Queen had had her troops withdrawn.

In Rome, Martin began to rebuild the dilapidated city and the equally ailing Papal States. As the first Renaissance pope, he revived art by bringing many important artists to his court. The cardinals he appointed also went with this new zeitgeist.

Pope Martin was not interested in reforming the church. Although he was a personally humble person, his unrestrained nepotism soon found almost all of Lazio in the hands of his family. The Colonna transformed themselves from feudal lords into a powerful dynasty, which played a role in the papacy as persecutors and persecuted people until the 16th century. The compromise of the Martinian Constitutions also fell during his term of office, but this could not prevent the split in the Franciscan order.

In Naples, the reign of John II was threatened by the French pretender to the throne, Louis of Anjou , who was also supported by the Pope . Martin enfeoffed him with the Kingdom of Naples in 1420. To protect herself, she first adopted Alfonso V of Aragon . But after falling out with Alfonso, the Queen of Naples changed course, declared the adoption of the King of Aragon to be invalid and now adopted Anjou Ludwig instead. Alfonso of Aragon, King of Sardinia since 1416, did not acknowledge the dissolution of the adoption. But the dissolution turned out to be only a minor setback for Alfons - in 1442 he became King of Naples. The clashes in the Kingdom of Naples meant an enormous strengthening of the papacy, because the previous interference of the kings of Naples in the affairs of the Curia no longer existed.

Pope Martin concluded his own concordats with five councils, which provided for a curtailment of papal centralism and fiscalism , but clarified open problems of the relationship between state and church.

In the election of the Archbishop of Trier in 1430, Pope Martin prevailed over his favorite Raban von Helmstatt over Jakob von Sierck, who was elected by the cathedral chapter .

He also worked to protect the Jewish communities in Europe and forbade pogroms and charges of ritual murders . These bans only helped in Avignon; in the rest of Europe they had no effect.

On April 22nd, 1418 the Council of Constance had ended. The council decree " Frequens " (October 9, 1417) called for the council to meet to continue the reform work at intervals of a maximum of 10 years. Pope Martin kept the obligation he had taken on and convened a council in Basel shortly before his death . However, it was only opened by his successor Eugene IV on July 23, 1431.

In the miniseries The Medici - Rulers of Florence , Martin V is played in 2016 by the Italian actor Andrea Tidona .