Sardinia ( Sardinian Sardigna , Italian Sardegna , Catalan Sardenya ) is - after Sicily  - the second largest island in the Mediterranean . The Phoenicians named her on Nora Šrdn's stele . A foreign people , who were also called Šrdn (mostly transcribed to Scherden or Schardana), encountered in Egyptian texts from the 14th to 12th centuries BC. Chr .; however, it is disputed whether this came from Sardinia. The Euboians called the island "Ichnoussa" and the Greeks "Sandalyon" because their shape is reminiscent of a footprint.

Most of the Sardinian population belongs to the Roman Catholic Church .

Sardinia is an island in the Mediterranean that belongs politically to Italy . It is 190 km from the Monte Argentario peninsula and 202 km from mainland Italy; in between lies the Tyrrhenian Sea . To the north lies the to France is part of Corsica , only through the 12 km wide Strait of Bonifacio (Strait of Bonifacio) separately. In the West, 335 km away to is Spain belonging Balearic island of Menorca . In the south, Tunisia is 184 km away.

The climate is essentially Mediterranean , with warm spring and autumn, hot summer and mild winter.

The provinces of Sardinia

The historical landscapes of Sardinia

The island is divided into areas (landscapes) that result from mountains or plains.

Section of the Costa Smeralda with a view in southeast direction of the Petra Ruja promontory, the Golfo Aranci peninsula and Isola Tavolara

Including the small offshore islands, Sardinia has a coastline of 1,848.6 kilometers. Some parts of the coast have well-known names: Costa Smeralda  - Costa Rei  - Costa Verde  - Costa Paradiso  - Costa del Sud .

The highest mountains are the Punta La Marmora at 1834  m slm and the Bruncu Spina at 1829  m in the centrally located Gennargentu Mountains . In the north the 1359  m high Monte Limbara dominates . Geological peculiarities are the gold , silver and iron , especially in the southern part of the island.

There are numerous islands off the main island of Sardinia:

Sardinia is a nature reserve in which thousands of rare animal and plant species are protected. 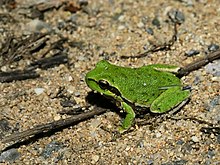 The Sàrrabus cave salamander, a species endemic to Sardinia

Airbus A330 of the Sardinian airline Air Italy 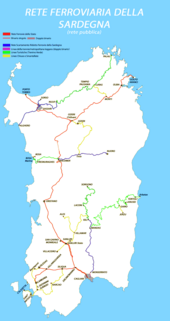 In addition to the railways of the Ferrovie dello Stato Italiane, there are several narrow-gauge regional lines of the Ferrovie della Sardegna as well as their tourism project under their popular name Trenino Verde u. a. between Bosa Marina - Macomer and Arbatax - Mandas. The electrification of the Ferrovie dello Stato lines was started - unlike the electrified lines on the mainland and Sicily with single-phase alternating current 25 kV / 50 Hz - but stopped after a short construction period. The public intercity transport consists primarily of a close-knit network of intercity bus connections , which are served by different companies. In 2016, the degree of motorization (passenger cars per 1000 inhabitants) was 619.

In addition to the commercial airports of Cagliari , Olbia and Alghero, there are also civil airports at Oristano (Fenosu) and Arbatax (Tortolì) in Sardinia . There has been no flight operation from the latter two since 2011.

A few kilometers northwest of Cagliari Airport is the Decimomannu military airfield , which is also used by NATO forces, including the German Air Force until 2016 (Tactical Training Command of the Air Force in Italy - TaktAusbKdoLwIT (dissolved)). In Salto di Quirra there is a launch site for military rockets and rockets for exploring the high atmosphere.

Description: In silver a continuous red will cross from to the left facing Moors heads bewinkelt with silver hair band. The flag is said to go back to Peter I of Aragon to commemorate his victory in the Battle of Alcoraz during the Reconquista .

The Sardinian economy lives mainly from tourism and the oil industry ; other important areas: trade, services, information technology and gastronomy. Wine ( Cannonau ) and sheep's cheese ( Pecorino sardo ) are also important . In the north of the island, traditional cork production plays a prominent role.

In 2009 Sardinia recorded 2,456,746 arrivals and almost 12.3 million overnight stays. 199,042 beds were available in the accommodation establishments. 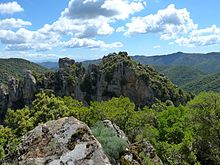 Sardinia is the namesake of two types of mineral that were first discovered on the island . The sardignaite, named in 2008 after the Sardinian name of the island, and the ichnusaite , named in 2013 after the ancient Greek name, were discovered in the mine of Punta de su Seinargiu (also Su Seinargiu) west of the municipality of Sarroch .

Provinces in the Autonomous Region of Sardinia