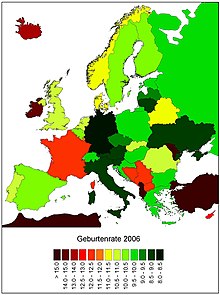 Birth rate (or birth rate , gross birth rate ; English crude birth rate, fertility rate ) is a key figure in demography that indicates the number of live births per year in a state based on 1000 inhabitants .

The birth rate shows the contribution that live births make to a country's population development . The population development does not only depend on the birth rate, but also on its counterpart death rate , life expectancy and emigration and immigration . The fertility rate ( fertility rate ) as a further key figure indicates how many children a woman would have on average in the course of her life if the age-specific fertility rates determined at a uniform point in time were valid for the entire period of her fertile life phase. It is based on the birth rate and, in contrast to this, is a purely hypothetical figure. A synonym for the birth rate is natality , a term also used in medicine and philosophy.

In the population statistics , the birth rate indicates the number of live births per year ( ) and per 1000 inhabitants ( ):

Niger and Mali , the leading countries in world statistics, have 44 live births per year and per 1000 inhabitants, so that the birth rate is 44 ‰ or 4.4% of the population.

The birth and death rates are subject to short- and long-term changes. In the demographic transition model (especially since the 1970s) it is assumed that there is a uniform trend from high to low birth and death rates. This development causes the old-age quotient to rise; H. the proportion of older people in the population would continue to increase. High birth and death rates would lead to an increase in the youth quotient . Many countries experienced a particularly marked change in the birth rate after the introduction of the birth control pill (the so-called pill break ).

In Germany , the birth rate has been rising again since 2012 after a long decline. In 2015, the average number of children per woman was 1.5 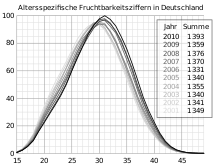 This refers to the number of live births by women of a certain age in relation to 1000 women of the corresponding age.

The level of the age-specific fertility rates differs significantly with the age of the women. For the years of age up to 15 and over 45 years they are close to 0, in between there is usually a pronounced maximum, the position of which depends, for example, on the educational level of the women under consideration. In Germany , this maximum has shifted from around 25 to 31 years in the last 40 years. 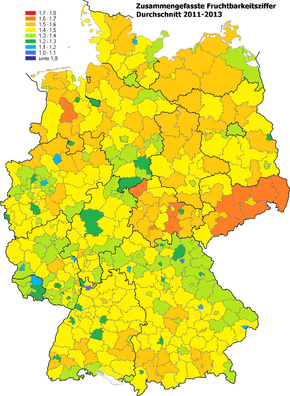 Already in 1798 Thomas Robert Malthus predicted in his population law that the food produced by humans followed a linear growth, the amount of food thus increasing at the same time intervals by the same absolute amount. In contrast, the population develops with geometric growth ( compound interest formula ), so it increases in equal time intervals by constant percentage increases. Mathematically, the soil yield can only grow exponentially ( etc.) in arithmetic progression , but the population can grow in geometric progression ( etc.), with the result of hunger and poverty . He foresaw a Malthusian catastrophe , an obstacle to economic growth caused by the population explosion .

The rapid population growth caused the People's Republic of China to introduce the national one-child policy in 1980 , which contributed to a drastic decline in both the birth rate and the population . From three children per woman in 1980, the birth rate fell to around 1.7 in 2008. Other populous countries have taken no action and continue to suffer from overpopulation . High birth rates tend to lead to poverty , especially child poverty . Since food production and water supplies cannot keep pace with population growth, especially in developing and emerging countries , famine and water scarcity have continued to increase.

In general, it is still true that the birth rates in developing and emerging countries are significantly higher than in industrialized countries .

The following statistics provide an overview of the birth rates in 2018:

The highest fertility rates are still in Africa , while Taiwan and South Korea have the lowest . China ranks 156th (out of 200 countries) with a low birth rate, India 102nd place. Germany is on the European average (EU-28).