The term population is to refer to the human population used within geographic boundaries and is different from ethnicity-related groups such as strain , folk and ethnic group .

Until the 18th century meant the population was not the population survey, but a Germanized form of the derived from the French term Peuplierung (orig. Peuplement , including: Pöblierung) of the population accumulation, compaction and conversion as a demographic process in general and as an object the (mostly absolutist ) population policy in particular.

Population in Germany according to public law 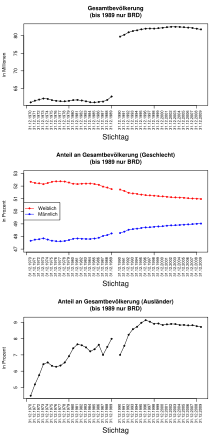 According to German public law , a person is deemed to be a resident of Germany who has their permanent residence in a municipality or territorial unit or who is entitled to live there; this includes the registered foreigners .

This term, which is mostly no longer used today, includes all residents who were at the relevant location on a specific reference date. Above all, this leads to problems for people who have been traveling and who have therefore occasionally been counted both at their place of residence and often also at their actual place of residence (double counting).

Population at the place of the main residence

This term, used today by most statistical offices, includes all residents who have their sole home in the relevant location or, in the case of residents with several apartments, the main residence. It is therefore assumed that the main residence is also the "predominant residence" of a person, although this is no longer asked. All people with secondary apartments are therefore not counted. Since students - as explained for the term "resident population" - often only have a second residence in the university town, they are not counted among the residents. Many cities are therefore trying to use special offers (such as cheaper public transport) to encourage students to declare their place of residence to be their main residence.

The “official” population figures are determined by the state statistical offices . The population figures are determined according to the Population Statistics Act , on the basis of the census of May 25, 1987 according to the results of the statistics of natural population movements and migration statistics. Survey documents of the statistics of the natural population movement are the reports of the registry offices about births and deaths; The survey documents for the migration statistics are the notifications from the registration offices about arrivals and departures, as well as status changes. The location of the main residence is decisive for the allocation of people with several apartments. According to Section 22 of the BMG and Section 16 of the Registration Act for the State of North Rhine-Westphalia of July 13, 1982, as amended by the Act of March 14, 1988, the main residence for married persons who do not live permanently apart from their family is the predominantly used residence of the family, for all other persons their predominantly used apartment.

This broadest term includes all residents who are registered with main and secondary residences at the relevant location, because all those residents are officially registered and are therefore “entitled” to live at this location. However, these population figures give a completely wrong picture of the total population, because people with more than one place of residence are counted more than once. If one were to add the corresponding population figures of all cities and municipalities of a country, this would have significantly more inhabitants. Nevertheless, many cities use the term resident in the sense of the “population entitled to reside” in order to increase the total number of residents accordingly. In large cities, this can mean several thousand more inhabitants.

The foreign population includes all persons who are not Germans within the meaning of Article 116, Paragraph 1 of the Basic Law , i.e. who do not have German citizenship . They also include stateless persons and people whose nationality is unclear. Germans who also have a foreign nationality do not belong to the class of foreigners.