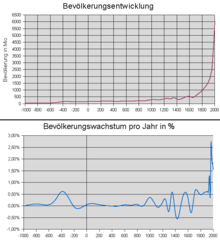 Development of the world population. Above: absolutely in millions of people; below: relative growth per year in%

The world population or earth population is the number of people who live on the earth or who lived at a certain point in time (or, according to projections , will live). The disciplines of demography and population geography examine the status, historical development, spatial distribution and dynamics of the world population and create forecasts .

Historical development of the world population

Theory of the spread of humans in the second wave of settlements from around 40,000 years ago

The modern man ( Homo sapiens ) is after the extinction of Neanderthals 30,000 years ago and Homo floresiensis 60,000 years ago, the only surviving type of the genus Homo . According to the theory of genetic bottleneck modern man suffered the most threatening to its existence decline in its population from 75,000 years ago, when after the eruption of super volcano Toba (now Lake Toba on Sumatra were able to save only 1,000 to 10,000 people worldwide) (see also Toba- Catastrophe theory ). After that , modern man spread from Africa to all other continents . By the end of the last glacial period 10,000 years ago, around 5 to 10 million people lived around the world.

The size of the world population 2000 years ago is estimated at 170 to 400 million, the UN assumes 300 million. The Roman Empire is said to have counted 57 million people at the beginning of our era, the Chinese Empire 75 million. 1000 years ago there were 250 to 350 million people, the UN assumes 310 million. After this standstill in population development in the first millennium of our era, growth began again in the High Middle Ages , but suffered incursions from plague , smallpox and other epidemics in the late Middle Ages .

500 years ago the world population was 425 to 540 million, the UNO assumes 500 million. In the course of the 16th century , the American population ( Indians ) is said to have declined from around 50 million to only 5 million as a result of introduced epidemics, while in Europe and Asia the population continued to increase. Global growth rose steadily over 0.5% in the 18th century and in the middle of the 20th century even over 2% for a few decades, so that one can speak of a population explosion.

After the year 1700 the population grew rapidly. For the first time in human history, the doubling time was in the range of centuries and finally decades. Around 1804 the world population exceeded one billion people. During the 20th century, the world population has increased roughly three and a half times:

In 2023 (after 12 years) a world population of 8 billion is expected. With a population growth of around 80 million people annually, the number of people on earth increases by almost 220,000 every day and by over 150 people every minute.

The majority of the population growth is currently taking place in the developing countries or in the less developed and poorer countries of the world. In contrast, in some more developed countries - especially most of the former Eastern Bloc - the population is declining. 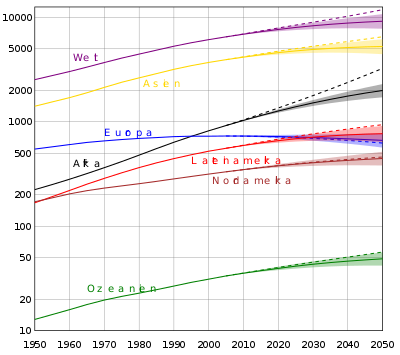 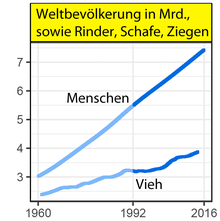 Development of the world population (and ruminant livestock populations) according to "World Scientists' Warning to Humanity: A Second Notice" 2017

From the catastrophe theory of Thomas Malthus in 1798 to the present day, prognoses mostly clearly overestimated the actual population development. One of the main reasons is false prognoses for the People's Republic of China . Population growth there fell more sharply than expected. In the 1960s, the pessimistic forecast by a statistician in the USA caused a sensation, who announced for June 21, 2116 that there would only be one standing room on earth for every person .

The Institute for Health Metrics and Evaluation (IHME) at the University of Washington in Seattle, on the other hand, expects only 8.8 billion people in 2100, 2 billion fewer than the UN in 2019.

In addition to the fertility rate, life expectancy - which are generally assumed to continue to rise - and child mortality are also significant. Migration also plays an important role in regional distribution .

In 1975, Sebastian von Hoerner proposed a population growth formula that represented hyperbolic growth with an infinite population in 2025. The hyperbolic growth of the world population observed until the 1970s was later correlated with a non-linear positive feedback of the second order between demographic growth and technological development.

The world population by continent 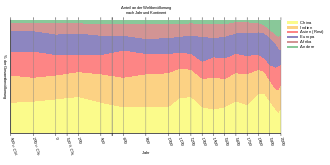 World population by continents (Asia divided into three parts), 400 BC until 2000 AD

The following population figures and projections are taken from the DSW data report 2016 of the German Foundation for World Population from September 2016 and correspond to the publication of the Population Reference Bureau: 2016 World Population Data Sheet .

India had its largest percentage of the world population in the early Middle Ages with 30%. During this time, Europe was at a historical minimum of 13%.

China had three maxima around the years 200, 1200, and 1800 with shares over 30%, with periods around 20% in between. The one-child policy in China since the early 1980s has visibly flattened the population growth curve. Currently (2019) the proportion of the world population is around 18%.

The share of North and South America remained low for a long time and around 1700 had a historic low of only 2%. However, it has increased sharply since 1800 and reached the 15% mark in 1975.

Africa fluctuated between 7 and 13%, with its share, having reached an all-time low around 1900, quickly caught up again in the course of the 20th century.

Around 1900 Europe reached its maximum of 24%, since then it has fallen again. At the same time, India was at its historical minimum of 18%. 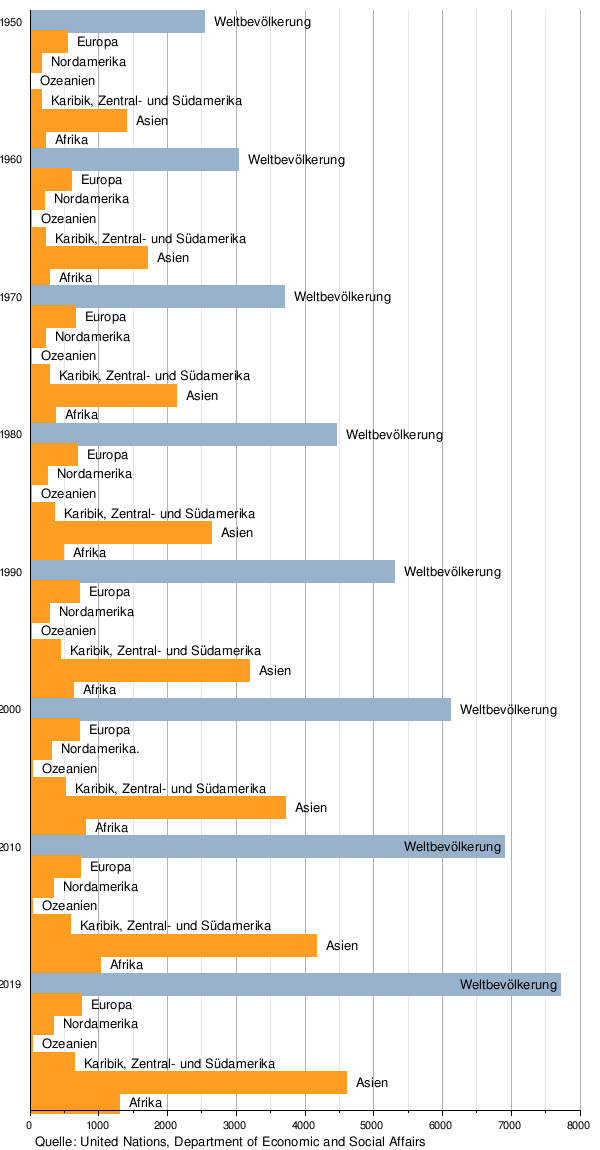 The information on a world population of 7418 million people is taken from the DSW data report 2016 of the German Foundation for World Population from September 2016 and corresponds to the publication of the Population Reference Bureau: 2016 World Population Data Sheet.

offer a complete overview of the distribution of a world population of exactly seven billion people among the 206 states in the list of states in the world (at the end of 2011):

The most populous states

See also : List of States and Territories by Population

The information is taken from the DSW data report 2019 of the German Foundation for World Population from November 2019 and corresponds to the publication of the Population Reference Bureau: 2019 World Population Data Sheet.

These 16 most populous countries are home to 5.076 billion people and thus around two thirds of the total world population of 7.691 billion. The European Union would take 446 million people (about 5.8% of world population) in 27 Member States (after the United Kingdom and Gibraltar European Union membership referendum) 3rd place. China, India, the EU and the USA together make up almost half of the world's population. In addition to the respective demographics, the respective population development is sometimes strongly influenced by migration (see list of countries by net migration rate ).

The UN expects a further increase in global urbanization in the future . In 2007, for the first time in history, more people lived in cities than in rural areas. The proportion of the urban population is expected to rise to over 60% by 2030 and reach around 70% in 2050. In 1950 it was still 30%, the proportion of the rural population consequently 70%. In absolute numbers, this means that the urban population will double between 2005 and 2050 from a good three to a good six billion people. In the same forecast from 2007, however, the UN expects that the absolute number of people living in rural areas will be almost constant between 2010 and 2025 and then fall. 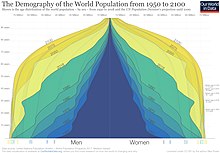 Population pyramid of the world population from 1950 to 2100

In addition to the general population growth, the increase in life expectancy can clearly be seen in the population pyramids. This can be seen in the change from the widened pyramid shape to a more pronounced beehive shape from the middle of the 21st century.

Although the gender ratio at birth is 1.05 male to 1 female, in 2018 it was only 1.01 to 1 for the total population of the world. This is mainly due to the lower life expectancy of men. For this reason there is a slight surplus of women almost everywhere in the Western world . The surplus of women is particularly strong in Russia due to the significantly below average life expectancy of Russian men, especially in the past. Striking is the high surplus of men in the People's Republic of China which female with frequent abortions body fruits as a result of child policy A- related. The surplus of men is even greater due to the large number of male guest workers in the countries of the Arabian Peninsula .

Number of all humans ever born

The seven billion people living in 2011 were over six percent of the 110 billion modern humans ever born at the time ; over 100 billion had thus died in the past including the Stone Age. There are various sources for calculating the number of people ever born, for example an article by the Population Reference Bureau from the year 2002 with around 106 billion modern humans ever born.

This extrapolation begins with two people in the year 50,000 BC. BC, whereas today it is assumed that the incarnation led to the emergence of modern man 200,000 years ago or earlier. However, early humans play only a minor role in the total. Despite the long period of time, the low life expectancy and the correspondingly high birth rates , the 42,000 years up to the beginning of sedentarism around 10,000 years ago only account for around one percent of the total, while more than half can be attributed to the last 2,000 years alone.

Other species of the genus Homo that lived up to about 2.5 million years ago are not included in this projection. In the case of Neanderthals , it is sometimes assumed that at times only a few thousand lived at the same time.

Another extrapolation comes from the Mathematics Department of the University of Hawaii in 1999 and started a million years ago with two people. Using a similar method, it comes to a total of about 96 billion people. Although the total population is estimated to be much higher at the beginning of settling down, here too, around 20 billion people, only a clear minority falls before 8000 BC. However, it is assumed that the life expectancy will remain constant over the entire period of 25 years.

Both projections assume constant population growth for the entire early period , which, based on the framework assumptions, is only 0.035 or 0.0015 percent per year (corresponds to a doubling of the population within approximately 2,000 or 45,000 years).

On July 11, 1987, the world population exceeded five billion people according to UN calculations. To draw attention to the problems involved, July 11th of each year has been declared International World Population Day since 1989 .