Entrance situation of a nature park

A nature park ( plural : nature parks, nature parks, in Switzerland nature parks ) is a protected landscape that has been created through long-term action, use and management. This valuable cultural landscape should be preserved in its current form and at the same time be marketed for tourism .

In most states, nature parks are subject to legally regulated area protection , which is part of nature conservation law. 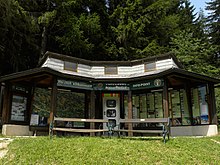 The nature park is one of the options for area-related nature conservation that the Federal Nature Conservation Act provides today (BNatSchG). The conservationist and entrepreneur Alfred Toepfer presented the program developed by the association together with the Central Agency for Nature Conservation and Landscape Management and other institutions for the establishment of (initially) 25 nature parks in West Germany at the annual meeting of the Association for Nature Conservation Park on June 6, 1956 in the then federal capital of Bonn (in the presence of Federal President Theodor Heuss and Federal Minister Heinrich Lübke ). Five percent of the area of ​​the old Federal Republic should be protected from major damage.

Definition of nature parks in Germany

The definition of the nature park category is based on federal law ( Section 27 BNatSchG ). Details, especially with regard to the designation, establishment or recognition as a nature park, vary in the individual federal states in accordance with the nature conservation law there. Section 27 of the BNatSchG stipulates that nature parks are large-scale areas that are to be developed and maintained in a uniform manner and are predominantly landscape or nature reserves , have a large variety of species and biotopes and a landscape characterized by diverse uses .

In nature parks, the aim is to use land in a sustainable manner , and because of their landscape conditions, they should be particularly suitable for recreation and sustainable tourism .

"Nature parks should also serve the education for sustainable development." This is stipulated in paragraph 2 of § 27 BNatSchG .

The underlying idea is protection through use, so the acceptance and participation of the population in protecting the cultural landscape and nature is very important. The protection of nature and the needs of those seeking relaxation should be linked in such a way that both sides benefit from it. Sustainable tourism with respect for the value of nature and landscape are in the foreground.

In principle, all actions, interventions and projects that run counter to the protective purpose are prohibited.

Natural parks are to be taken into account in the land-use planning and must be represented and observed in the development plans . One speaks of an information takeover . They are binding and cannot, for example, be overcome on the basis of an overriding general good in consideration .

The German nature parks are combined in the Association of German Nature Parks .

There are 105 nature parks in Germany, which take up 27% of the national territory. The administrations of the nature parks act primarily as communicators and networkers. In this way, nature conservation concerns are also strengthened. However, there is no regulation comparable to the other nature conservation categories and the associated restrictions on the use of land, so that no direct effect on abiotic and biotic resource protection is achieved (see Section 27 BNatSchG). The nature park administrations help, depending on the orientation, to preserve the scenic beauties, cultivated landscapes and also rare species and biotopes. There are various options for further nature conservation qualification of nature parks. In Germany z. B. a research project into the potential of new wilderness areas in nature parks. A complete list of the areas with a brief description can be found in the list of nature parks in Germany .

Year of the natural parks

2006 was declared the year of nature parks on the occasion of the 50th anniversary of the nature park idea . Federal President Horst Köhler took over the patronage . The year was under the motto Natural Nature Parks . 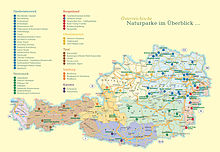 There are currently 48 nature parks in Austria with a total area of ​​around 500,000 hectares (as of 2015). They are visited by almost 20 million people every year.

In Austria , nature conservation is a matter for the federal states , nature parks are designated by the respective state governments. The sponsors are usually associations (or companies) in which the actors involved, such as tourism associations in the neighboring communities, landowners and infrastructure operators, work together. In 1995 all Austrian nature parks joined together to form the Association of Nature Parks of Austria  (VNÖ) as a common interest group.

In Switzerland , the establishment of regional nature parks is legally regulated by the Federal Act on Nature Conservation and Heritage Protection (NHG). Regional nature parks are one of three categories defined by the NHG. National parks and nature adventure parks are also planned. These two park types provide for strict protection zones in the park, while such core zones do not exist in regional nature parks. Rather, the latter focus on the equal promotion of nature conservation and regional economy. The federal ordinance on parks of national importance (Park Ordinance, PäV) contains more detailed provisions, for example in Art. 20: To maintain and enhance the quality of nature and landscape in the Regional Nature Park: […] d. to reduce or remedy existing impairments of the landscape and townscape caused by buildings, facilities and uses when the opportunity arises.

Although the NHG was only revised accordingly in 2007, there are already 15 regional nature parks in Switzerland. Due to their cantonal sovereignty, affected cantons can make a change in the law that allows the creation of a nature park. Subsequently, the community assembly can vote on a possible membership of a community to a park association and thus to a nature park by virtue of its community autonomy. The statutes of the park associations do not provide for any democratic participation by the voters of the communities. Membership in the park association can be canceled after ten years at the earliest.

Since August 2010 there are 15 parks with the label "Regional Nature Park of National Importance":

A list of the areas with a brief description can be found in the Article Park of National Importance .

Logo of the Natural Park of the Northern Vosges

Overview of the parcs naturels régional (in green)

In France the natural parks are called parc naturel régional . There are three of them in the border area (to Germany and Switzerland), in Alsace and in Lorraine , two in the low mountain range of the Vosges , the Regional Nature Park Ballons des Vosges with the Upper Vosges ( Belchen ) in the center and in the Northern Vosges the Regional Nature Park Vosges du North , which extends to the German border ( Rheinland-Pfalz ) and there to the to the geology is similar, German Palatinate forest Nature Park connects with which he in 1998 to a transboundary UNESCO - Biosphere Reserve Palatinate forest-Vosges du Nord was summarized. The third, the Lorraine Regional Nature Park , is located in the center of Lorraine, in the area of ​​the Lorraine lakes ( pays des étangs ), which is partly in the Moselle department in the area of ​​the traditional language border.

In addition, there are French natural areas and landscapes of European importance in regional nature parks such as Camargue and Alpilles in Provence , the course of the Verdon in the Provencal Maritime Alps , the volcanoes of the Auvergne and Ardèche in the Massif Central , the Corsican high mountain world and the cliffs, forests and heaths inland of western Brittany (Aremorica) .

There are a total of eight national parks and ten nature parks in Croatia. The following areas are under nature park protection:

The Peneda-Gerês National Park is a national park in Portugal . There are also various biosphere reserves and a number of nature parks and subordinate nature reserves, both on the mainland and on the two autonomous regions of Madeira and the Azores .

In Spain, natural parks ( Parque Natural, Parc Natural ) are defined and managed by the respective autonomous community , e.g. B .:

There was no qualification for: