The Vosges ([ voˈgeːzən ], pluraletantum ; French les Vosges [ voːʒ ], German formerly also Wasgauen , Wasgenwald or Wasigenwald ) are a low mountain range in eastern France with the highest elevation of 1424  m above sea level. NHN . Together with the Palatinate Forest , which connects to the north of the mountains without any morphological separation, they are part of a unified low mountain range with a total area of ​​around 8000 km², which extends from the Burgundian Gate ( Belfort - Ronchamp - Lure line ) to the Börrstadter Senke ( Winnweiler - Börrstadt line ) - Göllheim ) and forms the western boundary of the Upper Rhine Plain .

The name is probably derived from the originally Celtic mountain and forest god Vosegus (also Vosagus , Vosacius ) , later adopted by the Romans in Gaul .

Typical Vosges landscape in the valley of the Great Fecht 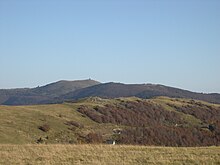 The Grand Ballon, at 1424 m the highest peak in the Vosges

Abundance of water: waterfalls on the eastern slope of the Vosges

Cloud-covered landscape on the Vosges ridge

Historically, geographically and geologically, the Vosges range from the Burgundian Gate in the south to the Zaberner Steige in the north. They form the southwestern edge of the Upper Rhine Rift . The north adjacent to the Saverne area and the French-German border is also counted in France to the Vosges and there as "Vosges du Nord" (Vosges du Nord) called, but this area less forms a unit with the actual Vosges, but above especially with the Palatinate Forest to the north . Both areas form the cross-border Palatinate Forest-Vosges du Nord biosphere reserve . These "Northern Vosges", together with the part of the Palatinate Forest south of the Queich , are also known as Wasgau .

In the southern Vosges, between the Burgundian Gate and the Breuschtal , the mountains often have the characteristic shape of a rounded dome, which can be explained by erosion and glacier activity, and the most striking representatives of which are the so-called Belchen system . Here are the highest peaks of the mountains. Between the Breuschtal and the Zaberner Steige, table-like mountains made of red sandstone dominate . They reach their greatest heights in Rocher de Mutzig (1010 meters) and Donon (1009 meters). The Wasgau, on the other hand, is characterized by low-lying mountains and ridges, diverse mountain shapes ( e.g. cone mountains ) and bizarre sandstone cliffs .

The highest mountains are:

A selection of other Vosges peaks:

The ridge line of the mountains largely forms the border between the French regions of Alsace in the east and Lorraine in the west, which are connected by some important passes (from south to north):

There are numerous lakes in the Vosges. The most well-known are:

The low mountain range was created in the Tertiary (more precisely Eocene ) around 50 million years ago through a tectonically- related uplift that continues to this day , which initially resulted in a mountain range connected to the Black Forest . Then the Upper Rhine Rift, which has since separated the two mountain ranges, sank. The increase also resulted in the emergence of the north of France and the south-west of Germany .

The Vosges are made up of gneiss , granites , Paleozoic schist and volcanic rocks . In the north and west the basement dips under the younger rocks of the Buntsandstein , which north of the Breusch (French: Bruche ) determine the surface shape of the mountains. In the east, the terrain slopes down to the Upper Rhine Plain at staggered fractures , where deposits from the Triassic and Jura have also been preserved. Lead and silver were mined, and later also barite (e.g. near Sainte-Marie-aux-Mines or Sainte-Croix-aux-Mines ). In the south and to the east there were some small deposits of hard coal ( coal mining in the Vosges and Jura ). 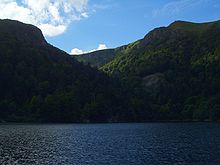 The Vosges belong to the type of glacial low mountain range. Their rocks belong to the Armorican mountain system . They are the first major obstacle for the humid air masses from the Atlantic and therefore have more rainfall than the neighboring Black Forest. In the past ice ages there was therefore also a stronger glacial activity.

The typical landscape forms are a series of karen , in which there are often cirque lakes (e.g. Lac Blanc ) and moors.

Hautes Chaumes in the north of the main ridge

As in almost all mountains of the temperate zone , the vegetation in the Vosges also depends on the altitude levels :

In the area of ​​the Upper Vosges, raised bogs have developed in various places (e.g. on the Tanet (1293 m) north of the Col de la Schlucht ) , some of which are designated as nature reserves. From silted cirque lakes (. B. in such Frankenthal the northwest Hohneck , the Lac de Lispach or at Etang du Devin in the north-eastern edge of the Tête des Faux ) Moore develop.

In addition to the usual native wild animals, the European wildcat can be found in the Vosges, as well as beavers , lynxes and chamois through reintroduction . The capercaillie, which is particularly typical of the Vosges, is threatened with extinction.

Comparison with the Black Forest 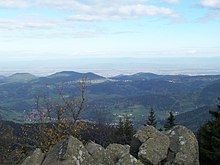 View over the Vosges to the Black Forest on the horizon

View from Badenweiler to the Vosges on the horizon

When comparing the Vosges and the Black Forest, the first thing you notice is the somewhat higher rainfall. This is due to the exposed position of the Vosges, whereby the air is intercepted by the Atlantic and loses some of its moisture due to incline rain . During the Ice Ages, this also led to greater glaciation in the Vosges. While the sides of the two mountains facing each other are similarly steep, since the Rhine serves as a receiving water here and the erosion force is comparable, one can see clear differences on the outside. The Black Forest slopes significantly more flatly, as its eastern receiving water is the Danube , which has a significantly lower erosion force than the Rhine due to its weak gradient and the long way to the Black Sea . On the west side of the Vosges, however, the receiving waters are the Moselle, which flows to the deeper Rhine . This results in a greater fluvial fragmentation of the western Vosges than of the eastern Black Forest.

In contrast to the Black Forest, there is a ridge in the Vosges that runs in a north-south direction . This comb was created or is created by erosive cutting on both sides. It begins south of the Zaberner Steige with the large Rosskopf (811 m above sea level) and ends at the Roc du Plainet (807 m above sea level) near Ronchamp in the Burgundian Gate . On the ridge, especially in the High Vosges, the dreaded cornices - overhanging snow slabs - can form, which can be a danger for winter sports enthusiasts. Unlike in the Black Forest, which especially in its central and southern parts up to heights of about 1000 m above sea level. NHN is permanently settled, in the ridges of the Southern Vosges - for example in the area of ​​the Munster Valley (French: Vallée de Munster ) - only alpine farming takes place: the cows are driven away in winter, the fermes are closed, the ridge road Route des Crêtes is not covered by snow freed and partially disappears under ski slopes (Kastelberg). Settlement and management are also far less intensive in lower regions than in the Black Forest and are only comparable in the valleys.

Over the centuries there was a slow densification of the settlement typical of forest areas . Forests were cleared for agriculture, cattle breeding and early industrial plants ( charcoal burners , glassworks ) , among other things . The hydropower moved mills by itself. Settlement concentration and immigration could not only take place in areas with mineral resources . In the mining area of the Lebertal , for example, there was an immigration of Saxon mining experts . Wars, epidemics or religious conflicts could depopulate regions - in the aftermath, it was not uncommon for people from other regions to be settled.

In pre-Roman times the Vosges were deserted or were settled and ruled by Celts . After the Roman era, the Alemanni also settled in the east , and Franconians in the northwest . Contrary to popular belief, the main ridge of the Vosges only coincides with the historical Romano-Germanic language border in the southern Vosges. East of the main ridge are: the valley of the Weiss around Lapoutroie , the valley of the Lièpvrette (modern also Val d'Argent , i.e. valley of the silver ), parts of the hamlet valley (Vallée de Villé) and parts of the Breuschtal (Vallée de la Bruche) . In contrast, the parts of the Northern Vosges north of the Breuschtal and the entire Wasgau belong to the Germanic language area, as the historical Franco-German language border turns northwest from Schirmeck and runs between Donon and Mutzigfelsen in the direction of Saarburg (Lorraine) (French Sarrebourg ). The Germanic areas of the Vosges belong to the Alemannic , in the north also Franconian dialect and cultural area, the Romanic areas to the Patois area . For a long period of time, the spread of languages ​​and dialects is basically related to the course of settlement movements. However, shows which took place between the 17th and the 20th century Alsace-wide switch from German to French as a common language , no significant changes in the settlement more.

The Vosges were sparsely populated in the Merovingian period (5th – 7th centuries), but culturally and historically significant due to the Luxeuil monastery in the western Vosges, where the Irishman Columban stayed for some time before he crossed the Alps to Northern Italy to get there to found the Bobbio Monastery . Pre-Carolingian manuscripts have been preserved from the Luxueil monastery ( Codex Ragyndrudis ).

During the First World War , the Vosges were the scene of fierce fighting. On the east side of the Vosges there are large military cemeteries (e.g. Hartmannswillerkopf ). Even today the trenches are clearly visible in many places , in which the enemies often faced each other only a few meters apart. On the west side of the Vosges ridge, just below the summit, runs the Route des Crêtes (ridge road), a military road that was built by the French army as a supply route to secure the newly conquered terrain against the Germans advancing from the east. Unlike most other streets, it does not connect any places with each other. Today this road is a popular tourist route, especially for motorcycles.

While the valleys of the Vosges have been settled for a long time and industrialized at an early stage (e.g. textiles, mines ), there are “fermes” - stone farms with wide, flat roofs, scattered at medium altitudes. Quarries were also operated in the middle heights, but their continuation is only worthwhile in a few cases today. Alpine farming takes place on the largely unwooded heights of the High Vosges, higher areas are often not permanently settled. Most of these high-altitude alpine huts are located along the Vosges ridge in the southern Vosges and, as “ferme auberge”, offer simple food (“Roigabraggeldi” = fried potatoes) and occasionally also accommodation. Overall, the agricultural use of the upper regions is less intensive, which contributes to the fact that the landscape often looks wild: stones and boulders have not been removed, bushes and gorse overgrow the slopes.

For the higher regions, tourism is particularly economical: mainly local tourism and from the Benelux countries , for which the Vosges represent the next higher elevation. In winter, ski areas are offered for this purpose, some of which are very large for a low mountain range (for example: La Bresse , Hohneck and Gérardmer , each with around 20 lifts ). The low snow reliability is compensated for with snow cannons. There are numerous cross-country trails. In summer you can hike, climb (Rocher de Martinswand), paraglide , etc. in the Vosges Mountains . Ä. The eastern slopes with their vineyards and picturesque villages benefit from tourists.

The French department of Vosges (88) is named after the mountains; nevertheless, the Vosges also extend to five other departments. The name of the Vôge , which adjoins the Vosges to the southwest and whose name developed from the feminine Vosagia , is related . In addition, the German name Wasgau for the mountain area north of the Zaberner Steige to the Queich has the same origin as the words Vosges and Vogesen .