This article deals with the river Moselle; for further meanings of this term, see Moselle (disambiguation) .

The Moselle ( French Moselle , Luxembourgish Musel ) is 544 km long and is the second longest tributary of the Rhine after the Maas . The river has its source in France , in the Vosges at Col de Bussang . In Lorraine it flows through Remiremont and Épinal , in a wide arc around Nancy to Metz and further north. Then it forms the border between Luxembourg and Germany . Soon afterwards it reaches Trier . The German Moselle valley is characterized by the strongly meandering course with many vineyards on partly very steep slopes. The Moselle flows into the Middle Rhine in Koblenz .

From 1958 to Neuves-Maisons, the river was canalised by its neighboring states as part of the Moselle canalisation and thus developed into a major shipping route. From the German-French border to the mouth, the Moselle belongs to waterway class Vb. The inhabitants of the Moselle call themselves Moselaner .

The name Mosel is derived from the Celtic form of the name Mosea via the Latin Mosella , a diminutive of Mosa , the Latin name of the Meuse, which initially ran parallel to the river.

The Moselle was first mentioned by Tacitus in Book 13 of the Annals and in Book 4 of the Histories.

The Roman poet Decimius Magnus Ausonius set her a literary monument in the 4th century. In his 371 poem Mosella , written in 483 hexameters , the late antique poet and teacher at the Trier imperial court describes a journey from Bingen via the Hunsrück to the Moselle and its course, to Trier ( Ausoniusstraße ). Ausonius depicts blooming and rich landscapes on the river and in the valley of the Moselle, which they owe not least to the politics of the late antique rulers.

Source of the Moselle at Col de Bussang (FR)

The Moselle rises in the southern Vosges near the Col de Bussang at an altitude of about 700  m and flows into Koblenz at the Deutsches Eck , whose north-northeast end at 64.7  m above sea level. NHN lies at 59.7  m from the west in the Rhine .

The section of the Moselle from the German - French - Luxembourg border triangle to the confluence of the Saar near Konz just before Trier is called the Upper Moselle in Germany (geographically incorrect) . The area from Trier to Pünderich is called the Middle Mosel , the section between Pünderich and the confluence in Koblenz is called the Untermosel or terrace Moselle. The valley meanders cut deep into the plateaus of the Rhenish Slate Mountains , the most striking of which is the Cochemer Krampen between Bremm and Cochem , as well as the vineyard terraces are characteristic of the Central and Lower Moselle .

From the border triangle, the Moselle marks the entire Saarland-Luxembourg border.

River system of the Moselle

The Vosges , today's headwaters of the Moselle , emerged about 50 million years ago . In the Miocene and Pliocene , the ancient Moselle was already a tributary of the ancient Rhine . When the Rhenish Slate Mountains slowly rose in the Quaternary , the meander of the Moselle formed between the Trier Valley and the Neuwied Basin .

High water marks in the old town of Cochem

After the Second World War, France pushed for larger ships to be able to sail the Moselle in order to be able to connect the Lorraine industrial areas. When the people of the Saar decided in favor of the Federal Republic of Germany in 1955, France demanded the expansion of the Moselle as compensation . In the Moselle Treaty of October 27, 1956, it agreed the Moselle canalization with the Federal Republic of Germany and Luxembourg and in return granted Germany the so-called loop solution on the Upper Rhine (instead of expanding the Rhine canal beyond Breisach). Construction work began in 1958, and on May 26, 1964, the Moselle from Metz to Koblenz was officially opened as a congestion-regulated large shipping route with 14 barrages . France extended the expansion to Neuves-Maisons by 1979 .

This means that 394 km of the Moselle have been expanded with a total of 28 barrages. In the years 1992 to 1999, the fairway was deepened from 2.70 m to 3.00 m, which gives a 1500-ton freighter an approximately 20% increase in cargo. The fairway is 40 m wide, widened in curves. The International Moselle Commission (IMK) founded in 1962 and based in Trier is responsible for shipping . The Moselle Shipping Police Ordinance drawn up by it applies in all three neighboring states, i.e. from Metz to Koblenz.

As early as 1970, more than ten million tonnes of goods were being transported on the Moselle, a large part of them with push convoys; to the mountain mainly fuels and ores, to the valley steel products, gravel and stones.

The Moselle was since 1921 Reich waterway, today it is a federal waterway from Apach ( barrage Apach up to its confluence with the Rhine at Rhine-km) on the border triangle in Koblenz to 242 kilometers in length from 592.29 waterways and shipping offices Trier and Koblenz managed . It is classified as a European waterway  Vb. Your kilometer reading begins at the mouth with km 0 and runs against the direction of flow upwards.

From Apach, the Moselle has formed a condominium over a length of 36 km since 1816, a joint German-Luxembourg territory for which the distribution of tasks has been regulated in an agreement since 1976. The Internationale Mosellegesellschaft, founded in 1957 initially to finance the expansion, administers the shipping taxes and the operating and maintenance costs to be covered.

There is a port in Trier and a transshipment point in Zell (Mosel) ; other ports are in Mertert , Thionville , Metz and Frouard . In addition to freight shipping, excursion boats operate between the wine villages, some of which are very intensively developed for tourism, and small towns in the Central and Lower Moselle.

There are yacht or sports harbors in the following places: Koblenz , Winningen , Brodenbach , Burgen , Löf , Hatzenport , Senheim , Treis , Traben-Trarbach , Kues , Neumagen , Pölich , Schweich , Trier, Konz and Schwebsingen . At Toul , the Moselle is connected to the Maas , Saône and Rhone , among others, via the Canal de la Marne au Rhin . The North Sea and the Mediterranean can be reached via other channels . 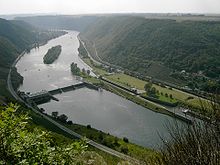 A total of 28 barrages are located along the Moselle.

Except in Detzem, all structures of a barrage are arranged side by side, with the lock on one bank, the weir in the middle of the river and the hydroelectric power station on the other bank. Between the lock and the weir are the boat tow / boat lane and the boat lock, and the fish ladder is between the weir and the power station .

Every year in summer the locks are closed to shipping for eight to ten days so that maintenance and repair work can be carried out. So that shipping can plan for this closure, the dates are decided and announced by the Moselle Commission for ten years in advance.

All buildings are fitted into the landscape with low structures; this was achieved through the choice of sector weir locks as well as lifting gates in the heads and miter gates in the lower heads of the locks. The dam targets and hydropower plants are controlled by the central control room of RWE Power AG at Fankel . 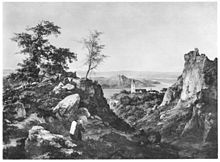 The Moselle Wine Route and the Moselle Cycle Route run in the Moselle Valley, which is 311 kilometers from Metz in France via Trier to Koblenz am Rhein . Between Koblenz and Trier, large parts of the route of the former Moselle Valley Railway run away from car noise and exhaust fumes . This was last possible on June 11, 2017, on the Sunday after Whitsun on the 140 kilometers between Schweich and Cochem, also car-free as part of the Happy Mosel Day.

Zell on the Lower Moselle

A number of remarkable castles and ruins adorn the heights above the Moselle valley, and a sightseeing tour by ship is also worthwhile.

The Moselhöhenweg has been running along the Moselle since 1910 , a hiking trail that is 185 km long on the Eifel side and 262 km on the back of the Huns. A special hike leads from Ediger-Eller over the Calmont via ferrata to Bremm through the steepest vineyard in Europe.

Before the barrages were built, the Moselle was a popular migratory river for folding boaters, which is why many barrages have boat lanes . The river is still used by many canoeists today, especially during the weekly lock closures that take place in early summer - then without commercial shipping.

The Moselsteig Trail was opened in April 2014 and runs for a total of 365 kilometers from Perl on the Upper Moselle to Koblenz . Numerous Moselsteig partner trails, the so-called side jumps and dream trails , complement the hiking options in the Moselle valley.

The ADAC Rallye Deutschland has also been taking place in the vineyards on the Moselle since 2000 ( Veldenz , Dhron , Piesport , Minheim , Kesten , Trittenheim , Fell , Ruwertal , Trier).

At the Koblenz barrage , the Mosellum offers exhibitions on fish migrations in the Moselle as well as on aquatic ecology, shipping and power generation. With the construction of the visitor and information center, the most modern fish ladder along the Moselle was put into operation.

The Moselle region was recommended as a travel destination in early 2016 in the New York Times' Special 52 Places to Go in 2016 .

16 sculptures from the sculpture symposium Stones on the River have been decorating the section between Palzem and Konz since 1999 and 2001 respectively . 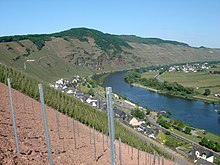 The German Moselle wine region, with all its tributaries, has had the cultivation or designation of origin "Mosel" since 2007 (until 2006 Mosel-Saar-Ruwer ). For marketing reasons, the chambers of agriculture divide the region into six wine-growing areas . The wine literature and specialist press, on the other hand, use a four-way division, for which geomorphological, small-climatic and historical reasons speak:

Wine growing on the German Moselle has been declining for decades. In 2005 statistics recorded 10,375 hectares, compared to 8,491 in 2012. Mostly, areas on extremely steep slopes have fallen fallow. The number of so-called part-time winemakers, or small and family farms, is particularly declining, which until the end of the 1960s provided the majority of wine-growing businesses. Comparative figures from the Rhineland-Palatinate Chamber of Agriculture for some wine locations on the Terrassenmosel z. For example, at the beginning of the 1960s there were 797 companies, and at the beginning of the 2000s there were just under 100 companies.

A contrary tendency can be seen in the group of established traditional wineries and younger winemakers with a sound training in oenology and business administration, who are expanding their businesses with the recultivation of renowned, long-forgotten locations. The use of the special terroir for increasing quality and value, which was "rediscovered" at the end of the 20th century , has led to a more differentiated judgment about "the" Moselle wine, which until a few years ago was still in the public eye for overproduction, fraudulent labeling and cheap offers.

On 10 November 2006, in Burg (Mosel) , the Regional Initiative Mosel founded. The introduction of the Mosel umbrella brand is planned based on the Eifel umbrella brand , which includes goods and services from the fields of agriculture and forestry, tourism, handicrafts and nature.

Moselle slate is a name of origin and trade name for slate from the districts of Mayen, Polch, Müllenbach, Trier and the surrounding area. Today only the products from the roof slate mines Grube Katzenberg and Margareta in Mayen carry the name Moselle slate . The name comes from the historical transport route of this slate across the Moselle to the Lower Rhine.

Bridges over the Moselle

The last Moselle bridges in Koblenz

Historical map of the Moselle

An (incomplete) list can be found under List of Moselle Bridges . Separate articles exist for the following bridges: