The Rhein-Zeitung ( RZ ) is a regional newspaper in northern Rhineland-Palatinate and an online newspaper ( Rhein-Zeitung.de ). It is published by Mittelrhein-Verlag GmbH based in Koblenz . The sold circulation is 160,651 copies, a decrease of 33.1 percent since 1998.

The Rhein-Zeitung publishing house in the industrial area of Koblenz

The circulation area of ​​the Rhein-Zeitung and its home editions is the entire former administrative district of Koblenz , which comprises almost half of Rhineland-Palatinate and in which around 1.7 million people live in 1,113 municipalities. The paper has almost a monopoly in the north of the state and with a sold circulation of 160,651 copies reaches around 640,000 readers a day (as of 2009).

On February 17th, 2020 it was announced that the Rhein Zeitung will close its local editorial offices.

The Rhein-Zeitung , like most German newspapers in recent years to rest lost. The number of copies sold has fallen by an average of 2.4% per year over the past 10 years. Last year it decreased by 3.5%. It is currently 160,651 copies. The share of subscriptions in the circulation sold is 90.7 percent.

The Rhein-Zeitung was founded after the Second World War as a completely new newspaper with no direct predecessor. In March 1946 the military government of the French occupation zone gave the then 32-year-old civil engineer Peter Josef Stein from Mayen the license to publish the Rhein-Zeitung. Stein and Wilhelm Nowack founded the Rhein-Mosel-Verlag GmbH for this purpose, based in Koblenz. The Rhein-Zeitung appeared for the first time on April 20, 1946. The new newspaper was set and printed in the Koblenz Görres printing house.

In December 1947 Nowack gave his share in the Rhein-Mosel-Verlag to the publisher Walter Twer (then 43 years old) from Nassau , who was then appointed managing director. In 1948 the Rhein-Zeitung was transferred to Mittelrhein-Verlag GmbH (Koblenz). Mittelrhein-Verlag was founded on April 29, 1948 by the joint licensees: publishing director Walter Twer, editor-in-chief Oscar Richardt and editor-in-chief Michael Weber. They also took on the merchants Erich Schneider and Joachim Ulrich as additional partners. In the May 5, 1948 edition, the new publishing house was first mentioned in the imprint as the publisher of the Rhein-Zeitung. From November 1948, the Rhein-Zeitung was produced in its own printing plant on the grounds of the Koblenz Fort Asterstein. Individual local editions were produced by local printing companies bound by work contracts. In 1951 the Rhein-Zeitung print shop in Koblenz moved from Fort Asterstein to Stegemannstrasse.

In 1966, Mittelrhein-Verlag acquired a 20,000 square meter plot of land in the newly developed "Rheinhafen" industrial area in Koblenz in order to build a new printing house and a new publishing house. In 1968 two new high-pressure rotary machines went into operation there. The publishing house, central editorial office, advertising department and typesetting moved to the new location in August 1969.

In 1969, the Rhein-Zeitung gave itself an editorial statute in which the editors commit themselves to independence from the state and parties and to ward off any influence.

In large parts of its circulation area, the Rhein-Zeitung has a quasi-monopoly position as a regional daily newspaper. However, the publisher is struggling with increasing competition and falling subscription numbers, especially in the peripheral areas.

As one of the first regional newspaper publishers, the publisher had outsourced its local editorial staff, i.e. its core business, for reasons of collective bargaining. In the subsidiaries, salaries that are well below the standard are paid. Numerous publishers have meanwhile followed the Koblenz model. Mittelrhein-Verlag is a member of the Association of Newspaper Publishers in Rhineland-Palatinate and Saarland. He is a member of the Federal Association of German Newspaper Publishers (BDZV). 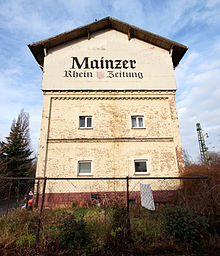 Facade advertising in Mainz-Kastel near the Mainz-Kastel train station for the Mainz edition. The red lettering has already faded: The strong points of Mainz .

In the first month after its founding in April 1946, the paper appeared in an edition of 52,000 copies with the local editions Neuwied, Koblenz, Mayen-Andernach, Cochem-Zell, Bad Kreuznach and Westerwald.

In 1947 the Rhein-Zeitung founded five more local sections for the regions of Lahn-Diez, Altenkirchen and Simmern (January), Ahrweiler (March) and Birkenfeld (June).

In January 1950, Mittelrhein-Verlag introduced the local Sankt Goarshausen edition. On February 4, 1950 the publishing house took over the title "Westerwälder Zeitung", on April 1, 1950 the title "Lahn-Zeitung". In December 1950, the Betzdorf and Knowledge region received its own local edition with the title "Rhein-Zeitung".

On March 25, 1954, Mittelrhein-Verlag took over the titles "Bernkasteler Zeitung", "Birkenfelder Zeitung", "Idar-Obersteiner Nachrichten", "Stadt- und Landbote" (Baumholder) and the "Public Anzeiger" in the Bad Kreuznach area. On March 27, 1954 the takeover of the title "Hunsrücker Zeitung" followed.

In 1969, on June 2, the local editions "Idar-Obersteiner Nachrichten", "Birkenfelder Zeitung" and "Stadt- und Landbote Baumholder" were combined in the "Nahe newspaper" edition in the Birkenfeld district.

In 1972 the Mittelrhein-Verlag in the Bad Kreuznach district took over the "Kirner Zeitung" on November 2nd.

In 1981, the Mittelrhein-Verlag in the Bad Kreuznach district took over the title “Allgemeine Anzeiger” from the Meisenheim area on January 2nd.

1986 the Mittelrhein-Verlag took over the title "Bendorfer Zeitung" on September 1st. At the turn of the year 1992/93 this edition was integrated into the Koblenz local edition of the Rhein-Zeitung.

In 1987, the first edition of the Mainzer Rhein-Zeitung appeared on October 14th, and was discontinued on December 31st, 2013. Most recently it had increasing subscriber numbers for 15 consecutive months, but with a circulation of 6,943 copies it was not profitable.

Since 1979 the “Rhein-Zeitung and their home editions” have been involved in the “Help us life” campaign for children and people in need. In 1989, the non-profit association Helft uns Leben eV was founded for this purpose. Thomas Eisenhauer was chairman until 2015, followed by Fred Pretz (today deputy) until 2017. Manuela Lewentz-Twer is currently the chairwoman, the managing director is Hans Kary. The association helps spontaneously when life and limb are threatened by a natural disaster, supports long-term projects and helps people to help themselves so that people in need can take their lives into their own hands again. Since 1979, more than 25 million euros in donations have been received and distributed. The association works with partners in this sector. In 2006 it was the Arbeiterwohlfahrt . In 2008 it was the Maltese Aid Service . In the case of the flood disaster in Pakistan in 2010 , it was World Vision and the “Children's Fund Global Care”. The German Agro Action is the media. The donations received flow 100 percent into the respective projects that are supervised by the volunteer members.

All projects are checked and journalistically monitored so that readers and donors can understand how and where the donations are used.

At the end of 1995, RZ was the first German daily newspaper to offer an online service with its own editorial team. Since 1996 all articles from RZ and RZ-Online have been filed in an Internet full-text archive . In 2001, RZ-Online developed e-paper, the world's first 1: 1 representation of a newspaper based on HTML. Since February 2009, the Rhein-Zeitung has been increasingly active in social media networks, especially on the Twitter and Facebook platforms .

At the beginning of November 2013, the newspaper introduced a payment barrier for parts of its website. According to the concept of a metered paywall , only ten regional online articles per month could be accessed free of charge. This did not affect national reports or those that were accessed via links from Facebook or Twitter. From August 1, 2014, only two articles per month were freely available; from the third article read, registration was required. Supraregional reports and articles that are accessed via Facebook and Twitter are now also subject to a charge. As of January 31, 2015, the two free articles were no longer available, and since then contributions have only been available for a fee. The newspaper justified this with the fact that in the future they no longer wanted to take part in what they saw as a nonsensical competition for reach.