The area of ​​the district of Altenkirchen (Westerwald) is 642 square kilometers.

The current district area belonged to different domains before 1803, u. a. the counties Sayn-Altenkirchen and Sayn-Hachenburg , the rule Wildenburg (already extinct in 1418, their possessions later came to the princes of Hatzfeld ) and the electorates of Cologne and Trier . All areas became Prussian in 1815. The state of Prussia divided its provinces into administrative districts and districts. This is how the Altenkirchen district in the Coblenz administrative district came into being in 1816 . The Prussian administration divided the district into the mayor offices of Altenkirchen , Daaden, Flammersfeld , Friesenhagen, Gebhardshain, Hamm, Kirchen, Weyerbusch and Wissen. The former lordships of Wildenburg and Schönstein were elevated to civil status in 1821 , but were again subordinated to the district administrator of Altenkirchen in 1839. The mayor's offices were renamed to offices in 1927 and existed until 1968. The association communities emerged from them . The name "Kreis Altenkirchen" was changed to "Landkreis Altenkirchen" in 1938, and the name "Kreis Altenkirchen" is still frequently used today. In March / April 1945, after the capture of the Remagen Bridge , American units fought here with the Wehrmacht .

The boundaries of the district have only changed insignificantly in the course of history. So on November 7, 1970, the municipality of Berod near Hachenburg was reclassified from the Oberwesterwaldkreis . On the same day, the Heckenhahn district of the Rott community was reclassified to the Neuwied district .

The Altenkirchen district has been part of the Rhineland-Palatinate state since 1946 .

The proportion of foreigners (registered residents without German citizenship ) was 5.1 percent on December 31, 2013 (6,609 people). The most strongly represented nationalities are mainly residents from Turkey, Poland, Italy, Kosovo, Russia, Greece, Serbia, Romania, the Netherlands and Spain. 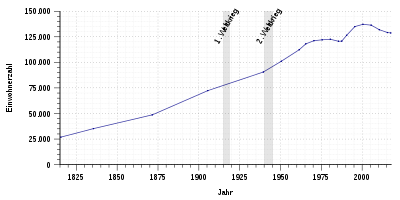 Population development in Altenkirchen (Westerwald) district from 1815 to 2017

The development of the number of inhabitants in relation to today's area of ​​the Altenkirchen district, the values ​​from 1871 to 1987 are based on censuses. From 1990 onwards, the status of December 31st is listed, based on the sole or main residence:

According to the 2011 census , 34.0% of the population in 2011 were Protestant , 42.1% were mostly Roman Catholic and 23.8% were non-denominational , belonged to another religious community or did not provide any information. The number of Protestants and Catholics has fallen since then. Currently (as of May 31, 2020) of the 129,777 inhabitants, 30.4% are Protestant, 37.3% are predominantly Roman Catholic and 32.3% are non-denominational or belong to another religious community.

The district of Altenkirchen (Westerwald) has a coat of arms and a flag.

See also : List of coats of arms in the district of Altenkirchen (Westerwald)

The federal motorway 3 Frankfurt – Cologne runs through the district in the extreme southwest with the Neuwied / Altenkirchen exit in Willroth. A 45 Gießen – Dortmund is located a little to the east of the district . Since the end of 2016, the district has been connected to the Siegen junction by the Hüttentalstrasse , which ends in Mudersbach- Niedererschelderhütte . In the north, leads A 4 Cologne-Olpe over. The district is otherwise crossed by numerous federal highways, including the B 8 , B 62 and B 256 .

As early as 1860, the Cöln-Mindener Eisenbahn-Gesellschaft ran its railway line from Cologne in the Siegtal up to Wissen and a year later to Siegen ( Siegbahn ). Since 1861 the main line has branched off as the Hellertalbahn from Betzdorf via Herdorf towards Haiger – Dillenburg .

A quarter of a century later the Prussian State Railway opened up the side valleys and the high Westerwald : The Limburg railways reached the district town of Altenkirchen in 1884 via Siershahn ( Unterwesterwaldbahn / Holzbachtalbahn) and in 1885 via Hachenburg ( Oberwesterwaldbahn ); the connection to the route in the Siegtal near Au followed in 1887.

A branch line was opened from Betzdorf to Daaden in 1885/86, the cross connection from Kirchen to Freudenberg followed in 1887/88 , later to Olpe (1907) and in 1890 the Wissertal Railway from Wissen to Morsbach was added. Finally, the Kasbachtalbahn from Linz am Rhein in Flammersfeld was connected to the Siershahn – Altenkirchen line .

The Gebhard Hainer country opened up the circle old churches themselves through the opened in 1913 and later repeatedly extended "district light railway Scheuerfeld-Nauroth" , as Altenkirchen Westerwaldbahn the circle GmbH today is and the traffic on the state railway Betzdorf - Daaden (Daadetalbahn) and Hellertalbahn has taken over.

The Free Grunder Railway, which today belongs to KSW Kreisbahn Siegen-Wittgenstein GmbH, began in Herdorf in 1907/08 .

Passenger traffic was stopped on several branch lines with a total length of 78 km between 1945 and 1984:

63 km remained for passenger traffic, i.e. less than half of the previous network.

Since August 1, 2002, the tariff of the Verkehrsverbund Rhein-Sieg (VRS) has been used as a transitional tariff on all rail routes in the Altenkirchen district if the start or destination station is in the area of ​​the VRS. From the municipalities of Wissen, Betzdorf, Daaden and Kirchen as well as from the city of Herdorf, journeys at the Westphalian tariff to selected cities in the Siegen-Wittgenstein district are possible on the rail routes and on individual bus routes ; From the VG Kirchen, journeys via Freudenberg to the Olpe district are also permitted. On January 1, 2009, the Altenkirchen district joined the Rhein-Mosel transport association (VRM). For trips within the district boundaries and, for example, also to the neighboring district of Neuwied , its ticket prices have been valid since then.

The following municipalities in the district have lost their independence to this day:

Several parishes have been renamed:

For lists on the term "area changes" see area reforms in Rhineland-Palatinate .

In the district of Altenkirchen (Westerwald), new emergency numbers have been in effect in some cases since November 1, 2008. The police emergency number 110 has remained unchanged and is still used by the police in Betzdorf, Altenkirchen (Westerwald), Straßenhaus , Siegen or Gummersbach . There were changes to the emergency number 112. It is now switched to the integrated rescue control center in Montabaur . All fire brigades as well as the emergency doctors and ambulances in the district are alerted from here. The obsolete service number 19222 from the German Red Cross has had its day.

Sons and daughters of the circle

On July 1, 1956, the district was assigned the distinctive sign AK when the vehicle registration number that is still valid today was introduced . It is still issued today.

Portal: Westerwald  - Overview of Wikipedia content on the subject of Westerwald

Counties and independent cities in Rhineland-Palatinate