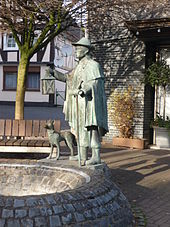 Hamm (Sieg) is a municipality on the Sieg in the district of Altenkirchen (Westerwald) in Rhineland-Palatinate . It is the administrative seat of the association of the same name and is designated as a basic center according to state planning .

Hamm is located halfway between Eitorf and Betzdorf or between Waldbröl and Altenkirchen on the northern foothills of the Westerwald ; the local community is on the southern edge of the Siegtal above Au (Sieg) and Fürthen , which are in the north; other neighboring communities are Pracht in the west, Roth in the east and Breitscheidt in the south.

Hamm received international importance through the founder of the rural cooperative system, Friedrich Wilhelm Raiffeisen , who was born here in 1818. Raiffeisen's father was the mayor of the Hamm mayor's office. The grandfather and great-grandfather also held this office, albeit under a different name. The Raiffeisen Museum is a reminder of his life.

The development of the population of the municipality of Hamm (Sieg), the values ​​from 1871 to 1987 are based on censuses:

The municipal council in Hamm (Sieg) consists of 20 council members, who were elected in a personalized proportional representation in the local elections on May 26, 2019 , and the honorary local mayor as chairman.

Kindergartens and schools in Hamm (Sieg):