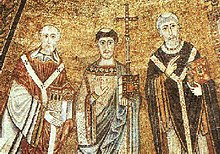 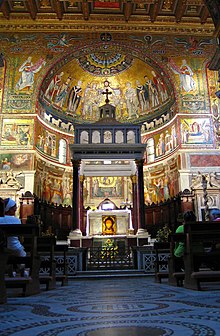 Apse of Santa Maria in Trastevere; Pope Innocent II is the first figure from the left (with a red robe), in the vault of the apse

Gregorio Papareschi may have been abbot of the Benedictine monastery of Santi Nicola e Primitivo . The oldest reliable source about him is his elevation to cardinal deacon by Urban II in 1088 (title church unknown), and in 1116 he decided to become cardinal deacon of Sant'Angelo in Pescheria . He was active in diplomatic missions under Popes Gelasius II and Calixt II . In 1122 he contributed significantly to the settlement of the investiture dispute through his mediation .

After the death of Pope Honorius II on February 14, 1130, a minority of cardinals, led by Cardinal Haimerich , elected Honorius Gregorius as Pope on the day of his death. He took the Pope's name Innocent II. However, the majority of the cardinals elected the antipope Anaclet II on the same day , which began an eight-year schism .

Bernhard von Clairvaux stood up for the benefit of Pope Innocent. This was therefore also supported by France and England ; Anaklet, however, from the Sicilian Normans , with which he gained the stronger position of power within Italy.

The German King Lothar III. was undecided on the papal question. At the urging of the Archbishop of Magdeburg, Norbert , he turned to Innocent and moved to Italy. On June 4, 1133 he was crowned emperor by Innocent in Rome , but the celebrations took place in the Lateran basilica, as St. Peter was occupied by Anaclet II.

After Lothar's return to Germany, Innocent was driven to Pisa by Anaclet’s troops , where he had to stay until Anaclet’s death on January 25, 1138. Viktor IV was elected to succeed Anaklet , but a little later he submitted to Innocent.

On March 29, 1139, Pope Innocent confirmed the founding of the Templar Order in the bull " Omne datum optimum " . In the same year the Second Lateran Council took place, which condemned Anaclet and his followers (including the Norman king Roger II ). A little later, Innocent led an army against Roger, but was captured and had to accept Roger's demands. After that, however, Innocent was able to return to Rome, where he succeeded in a cultural revival of the city in the last years of his pontificate. He died on September 24, 1143.

The Pope was initially buried in the Lateran basilica ; Seven years later, however, reburied in the church of Santa Maria in Trastevere in Rome, which he built in its current form .