The title of this article is ambiguous. Further meanings are listed under virtue (disambiguation) .

The word virtue (from Middle High German tugent , strength, power, [good] quality, skill, excellence '; Latin virtus , ancient Greek ἀρετή aretḗ ) is derived from suitable ; the original basic meaning is the suitability (ability, excellence) of a person. In general, virtue is understood to be an excellent quality or exemplary attitude. In the broadest sense, any ability to act that is considered valuable can be called a virtue. In ethics , the term describes a character trait that is considered important and worth striving for, which enables a person to realize the moral good . This is usually associated with the belief that this quality and the person who possesses it deserve praise and admiration.

Virtue is derived as a verbal abstract from taugen , a verb whose basic meaning is 'suitable, useful, useful'. In Old High German around 1000 tugund ('efficiency', 'strength', 'usability') is attested. In Middle High German , virtue, virtue also has the meanings 'male ability, heroism'. Under the influence of theological and philosophical literature, which was translated from Latin into German, a change in meaning took place in the Middle Ages : the term acquired a specific moral meaning and denoted a moral perfection in the Christian sense as the opposite of vice and sin . This use of the term has become commonplace since Notkers des Deutschen (10th / 11th centuries) was a translator .

Especially with reference to women, virtue has also been used as a synonym for chastity , for example in expressions such as, "She preserved her virtue". The narrowing of meaning associated with the moral theological use of language and the often associated impression of hypocrisy and Phariseeism has led to a devaluation of the term virtue in modern times . Today's use of the term is often distant, also mocking and ironic ('paragon of virtue, virtuoso').

The ancient Greek expression ἀρετή is often translated as “virtue” - also in scientific literature. At the same time, however, the problem of this translation is pointed out in the specialist literature. In general ( non-philosophical ) language of antiquity, aretē denotes "goodness", that is, the ability of a person to fulfill their particular tasks or the suitability of a thing (including an animal or a part of the body) for the purpose it is supposed to serve. In German, aretē , when it comes to the non-philosophical meaning , can be rendered with “suitability”, “excellence” or “excellence”. The translation with “virtue” is misleading in many cases, because often no virtue is meant in a moral sense.

In philosophical texts, aretē usually has a moral sense. Therefore, in such a context, the translation with “virtue” is usually not objectionable. However, mixing with modern, Christian ideas of virtue should be avoided.

The Latin word virtus is derived from vir ("man") and originally referred to manliness, which is expressed primarily as (military) bravery. The term also served as a translation of the Greek aretē and was given the meaning that aretē had in Greek philosophy (virtue), especially in philosophical texts and later in Christian usage . In this meaning, virtus (in the plural virtutes) was a term for different properties that were considered desirable in the context of social and ethical values.

The four classic basic virtues (since the Middle Ages: cardinal virtues) are prudence or wisdom , justice , bravery and moderation . Plato's theory of the basic virtues set the trend for the whole theory of virtue ethics. For Aristotle , virtue is the way to happiness . Happiness is not understood here as a subjective feeling of happiness, but as a happy life. Life is successful when man realizes the possibilities that are inherent in him ( entelechy ). 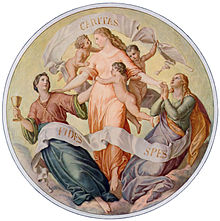 The Christian virtues go back to the ten commandments of the Old Testament and their interpretation by Jesus Christ in the New Testament , for example in the Beatitudes of the Sermon on the Mount . There Jesus also teaches about the application of the virtues of almsgiving , prayer and fasting ( Mt 6 : 1–21  EU ): For him, it is not just about what is done, but above all about the motives behind it.

The three divine virtues , also called theological virtues, are in the first letter to the Corinthians of the Apostle Paul ( 1 Cor 13:13  EU ). They are commented on , among other things, in the works of the Doctor of the Church Thomas Aquinas . They are: Faith (Latin fides), hope (Latin spes) and love (Latin caritas). In the teaching of the Catholic Church , the four cardinal virtues are added to these three theological virtues.

The Reformation added the virtue of perseverance ( Latin perseverantia ), which, according to Martin Luther, includes the unshakable certainty of being justified.

Based on the Psychomachia , a text by the Christian poet Prudentius from the 4th century, the following list of the seven heavenly virtues developed in the Middle Ages, each with a corresponding vice (see also mortal sin ) for supremacy in the soul. This list was also widespread due to the arrangement in Hildegard von Bingen's musical work in the Middle Ages:

The “nine noble virtues” in Germanic neo-paganism were borrowed from Nordic Viking sagas and Anglo-Saxon heroic epics , corresponding to the knight virtues in the circles of the Odinic Rite, which were perceived as too Christian . The code of honor - loyalty - courage - truth - hospitality - independence - discipline - diligence - perseverance is widespread. These virtues form the most important code in Germanic neo-paganism, but are not accepted everywhere.

Civil virtues include in particular: neatness, thrift, hard work, cleanliness and punctuality. These virtues are directed towards the practical management of everyday life. Their social function consists in establishing and securing an economic existence. Otto Friedrich Bollnow therefore also describes them as “economic virtues”, which represent the pragmatic counterpart to the other virtues, which are often based on ideals. These virtues are called bourgeois because they provided the prerequisites for the bourgeoisie in the Enlightenment to emancipate themselves culturally and economically from the nobility .

Karl Jaspers names objectivity, devotion to the object, prudent weighing, seeking out opposing possibilities, self-criticism, caution in final assertions, checking the limits and the nature of the validity of our assertions, listening to reasons, understanding and as well as virtues of scientific research thinking along from everyone else's point of view.

Prussian virtues are the virtues shaped by Protestant-Calvinist morality and the Enlightenment, which have been propagated and promoted by the Prussian state since Friedrich Wilhelm I.

The basic moral rules of Buddhism are the five silas , in which one vows to practice them

In Western culture, virtuous women are primarily associated with the characteristics of domesticity, thrift and chastity. Since the Christianization of Europe, Mary of Nazareth has been a virtuous example. In Jewish households, the so-called “praise of the capable woman” ( Prov. 31: 10–31  EU ) is part of the greeting of the Shabbats in the Friday evening liturgy . It is performed by the man.

In an old version of the Central Service Regulations of the Bundeswehr it is said that mutual understanding, good will and helpfulness created a comradeship that can withstand even greater loads. “The military virtues develop in the small communities of the troops. This is where camaraderie arises; it shows itself in the engagement for one another, especially in effort and danger. It should firmly connect superiors and subordinates in all situations. […] [It gives] confidence and support. Those who can do more have to help the less experienced and weaker. Wrong ambition, selfishness and insincerity destroy camaraderie. "