This article deals with wisdom as a human ability - see Wisdom (disambiguation) for other meanings . 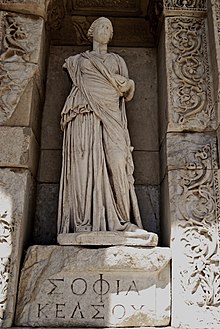 Wisdom (English wisdom , old Gr. Σοφία , Latin sapientia , Hebrew hokhmah ) primarily refers to a deep understanding of relationships in nature , life and society as well as the ability to identify the most coherent and meaningful course of action in the event of problems and challenges.

There are several definitions and concepts of wisdom, which as a rule move between the tension between rationality and intuition , knowledge and belief, and between experience and instinct . There is widespread agreement that wisdom shows mental agility and independence: it enables its wearer to do things systematically

which prove to be sustainable in the given situation. This often happens while avoiding disturbing influences, such as one's own emotional state or social group pressure . However, on closer inspection and comprehensive assessment of all circumstances, sometimes only with a temporal or spatial distance, these considerations, statements and actions turn out to be "correct", applicable or " true ". The same applies to words and actions that the wise one does not pronounce or do after careful consideration (cf. “ Si tacuisses, philosophus mansisses ”). Wisdom is counted among the cardinal virtues .

As an object, wisdom is thematized from philosophy and theology , the individual religions and ethnology , from the sociology of knowledge and personality psychology , from fairy tale and myth research as well as in their artistic designs through art , literature and music .

The adjective as ( "knowing, wise, life experience") comes from the Middle High German WIS, Wise ( "intelligent, clever, experienced, learned, knowledgeable"), which from the Old High German WIS, WiSi (8th c.) Or from Middle Low German and Old Saxon WIS descends. The Germanic word * weis (s) a- is derived from the developed Indo-European root ueid- , which is related to the meaning of know . The meaning is probably “knowledgeable about a thing, wise, experienced”, as in the ancient Indian vedas- (“knowledge, insight”) or in Sanskrit Veda (“knowledge”). Originally, this word form probably meant “to see” or “to have seen” before its meaning change , as can be seen from the difference between the Latin videre (“see”) and the Greek oida (“to know”). The German adjective as derived the factitive verb jmd. (Below) show ( "show cause, teach"). The main word of wisdom as "state of the way one" (Old High German wīsheit ) can be detected since the 9th century. Closely related is the word shrewdness in the old meaning "wisdom, shrewdness".

The relationship between philosophy and wisdom becomes a topic where the former actually or supposedly arises from the latter, explicitly delimits itself from older or contemporary wisdom traditions or, on the other hand, from wisdom itself - possibly only in a weakened form than the striving for it as fundamental unattainable ideal - declared to be identical. The self-designation of philosophy as “friend of wisdom” (philo-sophia) has been interpreted programmatically in the history of philosophy and was often the starting point for determining its own self-image.

While Homer , Pindar or Heraclitus still used sophia in their original meaning as “efficiency in relation to something”, this changes with Socrates , who in his arguments with interlocutors who were especially excellent in certain respects showed their failure to understand general questions and who was called the wisest by the Delphic Oracle because of its dictum “ I know that I know nothing ” . The motive used by Socrates here as a basis of wisdom corresponding to human ability in contrast to wisdom that exceeds it and is understood as divine should further determine the philosophical and partly also theological discourse on wisdom in the West.

In Plato's allegory of the cave , wisdom describes a knowledge of the real world by turning away from the deceptions and errors of everyday knowledge, public opinion and traditional prejudices. The preoccupation with the phenomenon of wisdom is what distinguishes the philosophers. The focus is on the world of ideas with the idea of the good . Wisdom has been one of the four cardinal virtues since Plato .

Aristotle says in his metaphysics of wisdom that it is “knowledge of certain principles and causes” (I 1, 982 a 2 - 3). In the sixth book of the Nicomachean Ethics he describes wisdom as an intellectual virtue or dianoetic virtue , which relates to the unchangeable and necessary. He sees it as a combination of the two intellectual virtues science ( episteme ) and understanding ( nous ).

The Stoa developed the ideal of the stoic sage , whose perfect virtue makes him happy even under torture in extreme cases.

In Hellenistic Judaism , wisdom becomes the central concept of the relationship with God. On the one hand, wisdom is the way in which God works in the world (wisdom of creation) and with which he speaks to people (wisdom of the Torah ). Wisdom, on the other hand, is the actual form of man's turn to God, in pious knowledge of God and virtuous action. She can even be presented personified, as a female figure giving advice ( Book of Proverbs ) or dancing before God.

In many religions, wisdom is considered divine .

Colloquially, wisdom is also used as the short title of the Book of Wisdom or the Wisdom of Solomon , a deuterocanonical or apocryphal book of the Old Testament .

The Compendium of the Catechism of the Roman Catholic Church only recognizes prudence as a virtue instead of wisdom .

In the Bible , wisdom is presented as a gift from God . So the wise Solomon got his proverbial wisdom in response to a prayer ( 1 Kings 3: 5-14  EU ). On the other hand, wisdom is also associated with personal experience: "The way of the fool appears right in his own eyes, but the wise one listens to advice." ( Proverbs 12:15  EU ) The Bible also contains direct instructions for action to achieve wisdom: " Go to the ant, you lazy one, see its ways and become wise ”( Proverbs 6: 6 ). "... to recognize wisdom and discipline, to understand understanding words." ( Proverbs 1, 2  EU )

The Apostle Paul took the Bible the view that the world is not able to recognize prudence and wisdom: "For God has said, 'I will destroy the wisdom of the wise and discard the wisdom of the wise'. Where are the wise men? Where are the scribes? Where are the leaders of today's world? Hasn't God just exposed as stupidity what this world considers wisdom? For although the world is surrounded by God's wisdom, it has not known God with its wisdom. And that's why God decided to save all who believe his apparently foolish message. The Jews want to see miracles, the Gentiles seek wisdom, but we, we preach that the crucified one is the Savior promised by God. For the Jews this is a scandal, for the other peoples stupid, but for those whom God has called - Jews or non-Jews - the crucified Christ is God's power and God's wisdom. For what appears foolish in God is wiser than man, and what appears weak in God is stronger than man. ”( 1 Corinthians 1: 19-25  EU )

“Ultimately, wisdom is nothing more than the measure of our mind, which keeps it in balance so that it neither drifts into excess, nor falls into inadequacy. Waste, greed for power, arrogance and the like, with which unsettled and helpless people believe that they can acquire lust and power, inflate it excessively. Greed, fear, grief, envy and other things that lead to unhappiness - as the unfortunate themselves admit - restrict him. However, if the mind has found wisdom, then keeps its gaze fixed on it ... then it need not fear excess, lack, or misfortune. Then he has his measure, namely wisdom and is always happy. "

In the Gnostic Gospel of Philip , Sophia is the "consort" of Christ as his female counterpart. This mediator function of wisdom / Sophia was then more and more replaced by the Logos , the (in Greek) male reason, whose personification or better incarnation is Jesus Christ .

In the Kabbalah , the Chochmah (divine wisdom, prudence, skill, plan of creation) is considered one of ten Sephiroth , i.e. H. Emanations of God.

Wisdom in Buddhism and Hinduism

The Buddhism distinguishes the terms Prajna , such as 'the great comprehensive wisdom' that permeates all things in the universe and sunyata (Sanskrit), the realization that all the apparent phenomena devoid of an independent inherent existence are. The realization of Sunyata in the perception of phenomena and self is therefore a fundamental experience in attaining enlightenment .

In Hinduism , wisdom and knowledge are called Vidya (Sanskrit). At the end of the day, yoga is also about dissolving the dualism , first of all stopping the thoughts of being in the moment, whereby the yoga postures ( asana ) are millennia-old supports that many Buddhists also practice today in addition.

Wisdom and wisdom in fairy tales and myth

Wisdom encounters in fairy tales and myths above all as the archetype of the wise old woman and the wise old man . Typical classic cases of wise women are Frau Holle , for example , but also those from the fairy tales The Gänsehirtin am Brunnen , The Mermaid in the Pond or the Devil's Grandmother from The Devil with the Three Golden Hairs .

In myth, the personified wisdom or wisdom is found as an attribute of various goddesses and gods. In some cultures wisdom is worshiped as a separate goddess or as a feminine side of God. Biblical Judaism, for example, knows the Chokmah as divine wisdom. In Greek this is translated as Sophia and especially venerated in the Orthodox churches ( Hagia Sophia ).

The reception of a (or a) wise man can be very different: If the wise man is misunderstood because people do not understand the meaning of what he has said or done, the wise man may encounter incomprehension, contradiction and rejection, and sometimes even physical violence. If, on the other hand, the meaning of what has been said or done is clear to people, the wise man can be admired and adored for his deep thought, his foresight, his originality and unconventionality (“lateral thinker”), possibly also his courage to take personal risks. Sometimes it takes decades or longer until the rejection turns into approval and the wise man is recognized or rehabilitated in the public eye .