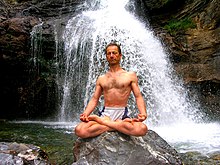 When asanas ( Sanskrit आसन āsana , German , n., The seat ' ) are predominantly recumbent postures in yoga (especially in Hatha Yoga ), respectively. Asana is the 3rd level of Raja Yoga (or Ashtanga Yoga or Kriya Yoga ) according to Patanjali . The other seven stages of Raja Yoga are Yama , Niyama , Pranayama , Pratyahara , Dharana , Dhyana and Samadhi . Karanas ( Sanskrit करण IAST karaṇa , German ' activity ' ) are the sequences of movements or the sequence of movements in Hatha Yoga.

When practicing, it is important to consciously go in, take the right breath, consciously hold and consciously dissolve the asana. Yoga asanas should always contain two qualities when they are performed: stability and well-being (sthira-sukham asanam. Yogasutre 2.46).
It makes sense to perform asanas that are specially designed to strengthen the muscles or those that prepare more difficult ones, dynamically in the rhythm of the breath. Asanas serve not only physical suppleness and vital strength, but also good body control; they harmonize body and mind (see also: breathing exercises ).

Yogasutre 2.47 adds: 'prayatna-śaithilyānanta-samāpattibhyām': The pose (asana) is mastered by letting go of tension and meditation on the infinite (ananta). Full asana goes beyond the physical sense of the exercise.

Yoga and the asanas are based on physical experiences, in which the practical implementation is more important than the theoretical knowledge of the different effects. One of the effects sought is to calm the flow of thoughts. This works better if only the bare essentials are spoken while exercising and passive “letting go” is allowed - the opposite of gymnastics exercises, which are also health-promoting, but mostly performance-oriented. Yoga is basically not about performance, the desire to achieve and success. Assuming the perfect position is less important than experiencing a spiritual quality through it , for example to feel that you are so okay and find your center instead of stressful thoughts. The yoga students should ideally be fully focused on themselves and, for this purpose, close their eyes if necessary and not seek comparison with other people. 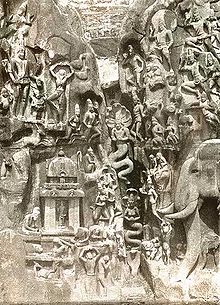 Mamallapuram relief. At the top left a man in Vrikshasana

According to some researchers and yoga masters, the Mohenjo-Daro Seal 420 is the oldest representation of an asana (the Mulabandhasana ). Historical representations of yoga postures from antiquity and the Middle Ages have not yet been researched enough so that no valid statements can be made. A well-known example is the large relief "Descent of the Ganga " in Mamallapuram (Tamil Nadu) from the 7th century; it shows, among other things, a man in Vrikshasana , a well-known yoga posture .

In the yoga sutra of Patanjali , the asanas form the third stage of ashtangayoga. The text does not list individual asanas, but only says in general:

"The sitting posture should be firm and comfortable."

This passage is usually interpreted to mean that Patanjali meant any meditation seat. Vyasa (6th century), the first commentator on the yoga sutra, mentions ten asanas by name on verse 2.46 without describing them. The Gorakshashataka (10th century), the oldest Hathayoga script, names two asanas, the Yogayajnavalkya (13th century) describes eight, the Hathapradipika (14th century) 15 and the Gherandasamhita (17th century) 32 asanas.

Medieval Hathayoga scriptures say that Shiva taught 8,400,000 asanas, one for each form of life. According to the Gherandasamhita , 84 of them are outstanding; however, only 32 asanas are described which are useful for people. The Hatharatnavali , which was written around the same time, lists 84 asanas, most of which are described. In the 20th century, the mystical number of 84 asanas was taken up by various schools. Bishnu Charan Ghosh taught 84 asanas, although there are considerable differences to the asanas listed in the Hatharatnavali. His student Tony Sanchez, founder of the US Yoga Association, still teaches these 84 asanas today with only minor changes. Bikram Choudhury , another student of BC Ghosh, shortened the sequence to 26 asanas in his Bikram Yoga .

The Mysore school , made famous by Tirumalai Krishnamacharya, taught over 120 asanas. Pattabhi Jois and BKS Iyengar , who emerged from this tradition, also taught a large number of asanas.

Other modern traditions have less systematized the asanas and do not give an exact number of asanas taught.

Images of some asanas 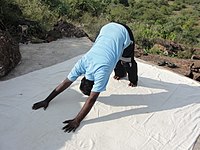 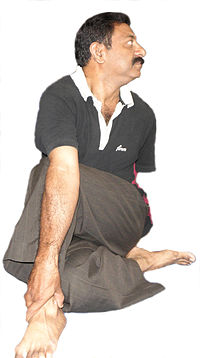 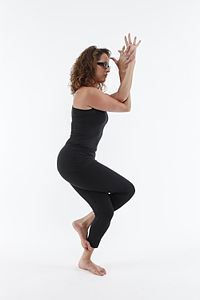 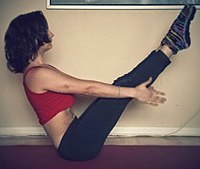 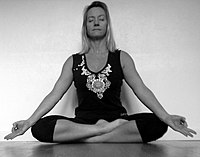 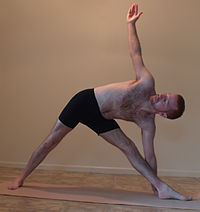 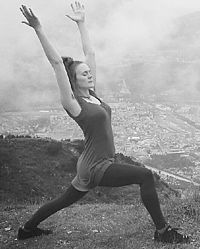 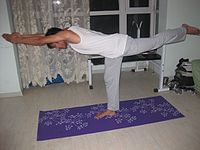 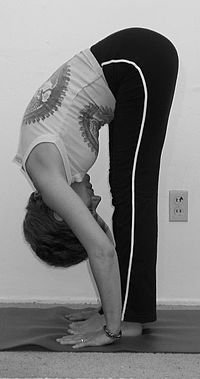 There are a large number of yoga postures with various variations and preliminary exercises. Some scriptures speak of 84,000 different yoga postures.

Many asanas sometimes require a considerable amount of flexibility and body control. In general, they should only be learned under the precise guidance of a yoga teacher or master ( Swami / Guru ), since wrong exercises can hurt and damage your health. Basically: everyone does the asanas as well and exactly as it feels comfortable.

In addition, there are numerous easier asanas or the possibility of varying difficult asanas. Elderly, sick and mobility-impaired people can also take part in yoga classes. It is up to the respective teacher to design the lessons in such a way that it is based on the possibilities and needs of the individual participants. In this way, a yoga class can be designed in such a way that very practiced, agile yogis and also inexperienced or movement-restricted people can participate and benefit at the same time. This type of teaching is called the Vini Yoga concept (after T. Krishnamacharya ).

A special group among the asanas are the karanas or vinyasas. This is to be understood as breath-guided movement sequences from individual asanas that are not held statically, but are performed dynamically. The best known example is Surya Namaskar - the sun salutation .