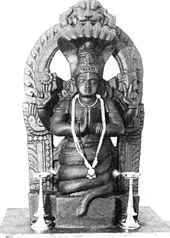 Patañjali is often represented as a hybrid of snake and human

Patanjali ( Sanskrit पतञ्जलि Patañjali , [ pʌtʌɲʤʌlɪ ]) was an Indian scholar and the author of the Yogasutra , the classic guide to yoga , which is why he is also known as the "father of yoga". In addition to the Yoga Sutra, a grammar and an Ayurvedic script are ascribed to him, but it is disputed whether the authors of the same name are identical.

Nothing is known about the life of Patanjali. It is believed that in the period between the 2nd century B.C. And lived in the 4th century AD. According to legend, his mother was Gonika (Skt. Goṇikā), which is why he is also called Gonardiya or Gonikaputra. She was an ascetic living as a hermit. As a woman she couldn't find any students to pass on her knowledge, so she prayed to the sun god Surya . Then a little snake fell from heaven into her hands, which transformed into a boy and asked to be allowed to be her student. Gonika therefore gave him the name Patanjali (Skt. Pat- "to fly", "to fall down"; añjali "greeting and prayer"). An alternative legend has it that it fell into the hands of the grammarist Panini . He is considered to be the incarnation of the world serpent Shesha .

In Indian art , Patanjali is depicted as a hybrid being , with his abdomen up to the waist shaped like a coiled snake, the upper torso is that of a man who has folded his hands in greeting and prayer (Skt. Añjalimudrā ). An umbrella-shaped snake fans out over his head.

Patanjali is given as the author of the Yoga Sutra , which is still considered the standard work of philosophical yoga today. Since this was already commented on by Vyasa in the 5th century in Yogasutrabhasya , his lifetime must have been before the 5th century. Vyasa's comment was in turn commented on by Shankara (788-820), one of the most important Indian scholars. The Yoga Sutra was first translated into Arabic by the Islamic polymath al-Biruni (973-1048) ; today there are numerous translations in various languages.

Patanjali is also considered the author of the Mahabhasya (skt. Mahābhāṣya "great commentary"), a commentary on the grammar Astadhyayi of Panini . After that it would have to be in the middle of the 2nd century BC. To be dated.

The third work attributed to Patanjali is the Charakapratisamskrita , a commentary on the Charakasamhita , which is one of the oldest treatises on Ayurveda. Legend has it that he wrote the comment after having learned about body functions in a dance class. However, this comment is lost, which is why it is not possible to check time and authorship.

Identity of the three authors

For the first time there is a commentary on the Yoga Sutra of Patanjali from King Bhoja of Malva (11th century), who wrote the Rajamartanda . There is a hint that the grammarian and the author of the yoga sutra are identical. Around the same time put Chakrapanidatta (11th century) in his work Ayurvedadipika , a commentary on the Charakasamhita , the grammarian with the author of Charakapratisamskrita and with the mythical snake king Ahipati ( "snake Father") is equal.

It was not until the 18th century that more information about the identity of the three Patanjalis was found. In Shivarama (18th century) there is a hymn in honor of Patanjali, according to which all three works belong to the same person:

- Shivarama: Vasavadatta Commentary ; in the translation by Reinhard Palm

Many modern yoga masters follow this view, especially BKS Iyengar is an advocate of this view and has the hymn traditionally handed down by Shivarama sing at the beginning of his lessons.

The opinions about the identity of the three authors, however, is controversial in scientific research. Surendranath Dasgupta is of the opinion that the language of both works show clear parallels. Even Richard Garbe holds the grammarian and the yoga master for the same. On the other hand, Hermann Jakobi pointed out that the vocabulary of the two works was too different, and assumes the existence of two authors of the same name, such as Arthur Berriedale Keith and James Haughton Woods .

See also the literature given in the article Yogasutra .