The title of this article is ambiguous. Further meanings are listed under Nature (disambiguation) .

Nature ( Latin natura from nasci “to arise, to be born”, Greek semantic equivalent φισις, physis , cf. “ physics ”) usually denotes that which was not created by humans. 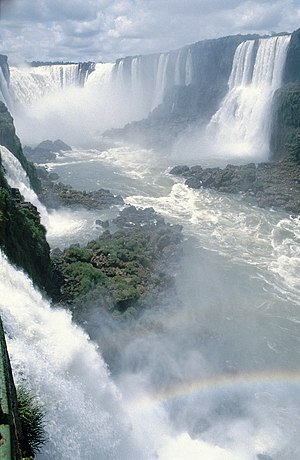 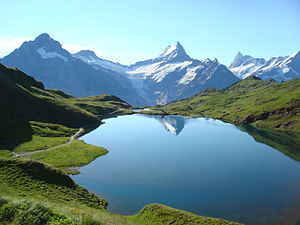 Bachalpsee in the Swiss Alps

Eruption storm during the eruption of Galunggung in 1982

The main meanings of the term nature are

Nature as the opposite of culture

“Nature belongs to that which remains and does not destroy itself. Culture is completely different. Its technical, namely military, powers are probably able to destroy themselves and all earthly life in one fell swoop. "

As the leading category of the western world, nature generally denotes that which was not created by humans, in contrast to (human-made) culture ; For example, the term cultural landscape is used to describe a landscape that has been permanently shaped by humans.

There is no longer any social consensus as to whether humans themselves belong to nature or not . In the first case, one speaks of an extra-human nature to express that people are otherwise part of nature, whereby the concept of nature approaches the concept of the environment .

Natural events , natural phenomena include rain or thunderstorms , the climate as a whole. The fact that these natural phenomena have long been influenced by human culture does not fit this traditional view. Human interaction with nature is increasingly the subject of criticism of culture, social systems or governments.

In our linguistic usage existing expressions such as "natural" (self-evident) or "in the nature of the thing" refer to the elementary meaning of the term nature. Already in the Romantic period there was a great interest in nature - in connection with an increased focus on inwardness and feelings - as a counter-movement to industrialization .

Today more than ever critical questions arise in this regard: ecological problems such as scarcity of raw materials and environmental pollution are the consequences of the overexploitation of finite and renewable natural resources . Events that humans cannot control, such as earthquakes or volcanic eruptions, are natural disasters on a human scale . The demand for intervention in natural events to protect against such natural hazards is in contrast to the aforementioned cultural criticism.

For a long time in western cultural history , nature was also considered an “enemy” of man: It was terrifying, full of dangers and threats. Only in the course of the Enlightenment did the aforementioned counter-movement lead to the transfiguration of nature in society; it was now seen primarily as a model for aesthetics and harmony . The role of humans shifted from being above to standing next to nature. With the emergence of the environmental movement in the 20th century, humans were increasingly assigned the role of a "disruptive factor". This becomes particularly clear in the syndrome concept of the German Advisory Council on Global Change (WBGU), which has a particularly high degree of scientific power of definition: Here, nature is viewed as a term for the order patterns “highly complex structures of interactions between ecological systems” and “result of conflict-prone evolutionary processes” that “strikes back where their laws are disregarded, their ecosystems destroyed and their resources plundered”, so that there would be no reason for “simple models of reconciliation and harmony”.

Nature as a philosophical concept of the western world

Colloquial use of natural or unnatural and expressions such as “it is in the nature of things” indicate an expanded meaning. Interpretations such as "given by nature" or "determination" are possible here.

Augustine of Hippo distinguishes between a material and a formal definition of nature. For him, nature is essence (essentia) and substance (substantia). The theology has always followed the question of the relationship between nature and supernatural grace .

A detailed debate within the philosophical branch of aesthetics deals with the " natural beauty " (in contrast to the beauty created in art).

In ancient Greek philosophy, nature was to be equated with “essence” and “inner principle”. For most of the ancient philosophers , especially Plato , the Stoics and Neoplatonists , the term "nature" ( ancient Greek φύσις, physis) referred to the well-ordered world as a whole ( ancient Greek κόσμος, kosmos = cosmos ). Aristotle , on the other hand, applied the term primarily to individual things. For him, nature is what defines the determination and purpose of beings. It affects both the power inherent in things ( Dynamis , Energeia ) and the place associated with it and the movement associated with it. “Light” rises up, “heavy” sinks down. The antiquity, however, already knew the opposition between nature and statute (law, ancient Greek νόμος, nomos), whereby statute means what has been set by man.

When modern natural science began to develop , nature was mostly viewed as the entirety of purpose-free, extended bodies that are subject to the laws of nature . The ancient view that nature determines the essence and development of beings was only held with regard to the "nature of man", but has been discussed controversially over and over again in recent times. The term nature increasingly referred to what can (and should) be explored, recognized and controlled by human consciousness.

Today's discourse about the protection of nature includes both the emotionally comprehensible nature, which is provided with ethical values, and the rationally abstracted "system of nature". The philosopher Ludwig Fischer says:

"We are reminded to have to think of nature as an objectively given and as a culturally conceptualized one at the same time."

As a philosophical term (cf. natural philosophy ), what is natural (originating from nature) and what is not natural is shaped by the relationship between people and their environment . In this context, the environment stands for the non-ego that is outside the human ego .

The term nature is not value-free, so natural disasters, natural hazards or the like are also spoken of. Nature is related to human existence. This relationship is primarily determined by normative attitudes that are emotionally , aesthetically and religiously judgmental (Oldemeyer 1983).

Nature as a useful object

In the Enlightenment , nature was then completely subordinated to man for his purposes, and the wilderness (primary nature) was excluded from it as something still to be cultivated. This technical-utilitarian attitude has been understood since the natural-philosophical considerations of Jean-Jacques Rousseau as a perversion of the state of nature and nature has been viewed sentimentally, but without overcoming the separation between man and “divine nature” ( Hölderlin ). An understanding manifested itself that “saw nature as a counter-concept to human culture and as a self-defining, subhuman object of human use, and partly still sees it”, namely as “the basis and justification for unrestrained exploitation without normative restrictions” (Oldemeyer 1983).

Such a view of human use has been viewed critically from many sides. For example, the economist Ernst Friedrich Schumacher explains in his 1973 book Small is beautiful that nature and the creatures that live in it - also in themselves - are to be viewed as “goals” and not simply to be viewed from an exclusively economic point of view. Even from a purely rational point of view, Schumacher sees it as justified to state “that they are sacred in a certain sense . Man did not make them, and it is unreasonable not to do or recreate such things that he has not made, if he has corrupted them, to treat them in the same way and with the same attitude as things that he made himself Has".

Nature as an aesthetic and symbolic object

In the lifeworld, nature is perceived in many ways as an aesthetic and symbolic object, e.g. B.

In the field of poetry and poetry , nature is also allegorically described as "mother of all life" or "all mother".

The biologist Hansjörg Küster points out that nature is mostly understood as an unchangeable unit, but is actually subject to permanent change: "In it there are constant temperature fluctuations, the removal and deposition of rocks, growth and death of living beings, changes in locations." For this reason, nature is now understood in scientific discourse as a dynamic variable which, moreover, can at times be influenced by humans to different degrees and is therefore divided into different degrees of naturalness .

Based on ecology , which emerged as a biological sub-discipline towards the end of the 19th century, and later on cybernetics , nature was understood as a self-regulating system. The "we-world relationship" emerged (Oldemeyer 1983).

With the popularization of ecosystem research, since the 1980s, more people in industrialized countries have gained the insight that nature cannot be understood as a whole, but only as an open system, of which humans and their culture are also part (integrative relationship) (Oldemeyer 1983). This is z. B. also clear in the definition of work , which names society and nature in the system context, whereby the work processes are mediating elements and procedures that people can only shape openly because of their divergent goals.

Derived from this would be z. B. to recognize the city, a human cultural achievement, as second nature . The city as a habitat (habitat) of the people we are increasingly lebensunwerter make, thus creating a need for a diffuse ideal of wild or untouched nature for recreation. What is simply overlooked is the fact that areas that are heavily deformed by humans also contain nature (worth protecting). This integrative conception of nature is found in specialist circles, e. B. in nature conservation , in ecology, urban ecology, etc., already settled. Ludwig Klages describes the rationally formed or “spirit-permeated” landscape as second nature.

Within science , nature is conceived very differently, mostly it is assumed that natural science deals with nature or at least a part of it.

However, the use of the term must be presented as very controversial in the philosophy of science . Schematically, three predominant basic types of roles for the term nature in the scientific concepts can be distinguished with regard to their relationship to being :