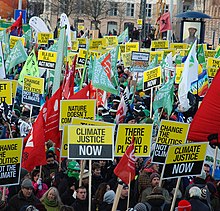 Global action day in a bid to Climate Justice (climate justice) to the UN Climate Change Conference COP 15 in Copenhagen, 2009

Action alliances for the environmental movement

Environmental movements can be differentiated on the basis of their specific (thematic) objective, their degree of organization, their size, the strategies they have chosen, etc. Ideally, they go through several phases, which run from the first confrontation with the problem, the thematization (mostly above all rejection of developing environmentally harmful practices) to the organization of structures that solve these problems. Environmental movements that require major social upheavals, such as the energy or agricultural turnaround , run in waves over a long period of time. Not infrequently, however, individual ecological initiatives of these movements are also limited in terms of topic and time. They end when their goal, such as preventing a large slaughterhouse or a road project, has been achieved. Another type of limitation can be found in the annual “ Mobil ohne Auto ” campaign, for which there are preparatory groups.

History of the environmental movements

The following important information is missing from this article or section:
International history until 1970
Help Wikipedia by researching and pasting it .

The historian Joachim Radkau dates the beginning of the environmental movement in today's sense to the debate about the wood shortage around 1800. The fears of the wood shortage, a supply crisis for the raw material wood, arose parallel to the "natural cult" of the forest romanticism at the time of the Enlightenment . In the wake of the German-speaking countries to pioneer were afforestation and Japan to pioneer a sustainable forestry . Historians argued in the 1980s whether the wood shortage was an actual or just feared resource crisis .

Radkau himself assumes that the environmental movement has a certain blindness to history and a pronounced lack of interest in the roots and predecessors in their own cultural area. For today's European environmental scene, the American nature conservation movement, which goes back well into the nineteenth century, is the actual forerunner. The idea of considering special natural landscapes as worthy of protection came up with William Wordsworth and George Catlin as early as 1810 and 1832, respectively. In 1864, at the instigation of John Muir, the first sanctuary was defined - in what is now Yosemite National Park in California .

The European Year of Nature Conservation 1970, the first Europe-wide environmental campaign with over 200,000 actions, is considered to be the birth year of the modern environmental movement.

1971 z. B. an international alliance of environmental protection organizations was founded by four organizations from France, Sweden, the USA and England , the Friends of the Earth : 2011 with over two million members and supporters in 76 countries.

1899 in Stuttgart by Lina Hähnle the Association for Protection of Birds (BFV) as a precursor of today's Naturschutzbund Germany e. V. (NABU) founded: NABU is today as a non-governmental organization ( NGO, Non Government Organization ) with the BUND, founded in 1975, one of the largest recognized nature conservation associations in Germany (with association - right of action in nature and environmental protection).

As early as the 1950s and 1960s, there were high-circulation non-fiction books that predicted environmental crises or combined doom prophecies with popular scientific accounts. Authors of such books were among others Erich Hornsmann , Reinhard Demoll , Günther Schwab and Bodo Manstein .

In Tübingen is "survival in the nuclear age" by Professor founded immediately after the held on November 26, 1970 Lecture Harald Stumpf from the Institute for Theoretical Physics , the Committee for Environmental Protection , in addition to the shortly afterwards that of Hartmut Gründler founded Lega Ambiente established.

The Badisch-Alsatian citizens' initiatives, consisting of 21 groups, were also important for the growing second environmental movement . They formed in 1972 in the dispute against a bleaching chemical plant near Marckolsheim in Alsace , were ultimately victorious in the non-violent struggle against the Wyhl nuclear power plant in Kaiserstuhl in southern Baden and are considered the first larger base of the BBU, which later comprised 600 citizens' initiatives. In the 1970s and 1980s, the anti-nuclear movement was an integral part of the environmental movement in the public eye.

Star march against an extension of the Cospuden opencast mine in the nature reserve, April 1990

In West Germany, the anti-nuclear movement in particular gave rise to the first non-governmental organizations of the environmental movement at the end of the 1970s. Such independent organizations were forbidden in the political system of the GDR. In the GDR stood next to the protest z. B. against forest damage in the Ore Mountains or air pollution in Bitterfeld / Wolfen always the rebellion against the non-information policy of the government. There were crystallization points in the oppositional environmental movement : the church research home in Lutherstadt Wittenberg , the ecological working group of the Dresden church districts or the environmental library at the Berlin Zionskirche and finally, from 1988, the green-ecological network Arche .

With the turning point in 1989, an increasing resistance formed. In January 1990, the citizens' initiative “Stop Cospuden 90” was founded, which organized a star march to the Cospuden opencast mine in the spring of that year . Over 10,000 people took part. The protest was successful. On April 20, 1990, the preliminary cut of the mine was stopped, and on October 7, 1992 the last coal train left the mine.

The Sierra Club is the oldest and largest conservation organization in the United States : It was founded on May 28, 1892 in San Francisco ( California ) by the conservationist John Muir and several professors from the University of California, Berkeley and Stanford University .

The American biologist and ecologist Barry Commoner (* 1917; † 2012), author of several influential non-fiction books on environmental protection , is considered to be one of the leading early exponents of the modern (North) American environmental movement.

In West Germany, the following political consideration of the second environmental movement was ultimately very effective: not only the working people, but also nature was seen as threatened by the industrial economy. This idea of the alternative movement received entry into the first from the resistance to the nuclear energy resulting ecology movement of the 1980s that a negligent waste as themed and incineration as the former industry-friendly chemicals policy , the deforestation and the tropical forest destruction , the threat to the earth's atmosphere ( ozone hole ) , environmentally harmful forms of animal fattening , etc. Other topics were gradually integrated into the environmental movement: "After a new group of people came to nature conservation through environmental thought , a relationship with the peace movement , with emancipatory women's groups, developed ." (Stölb 114).

For the GDR environmental movement, the political consisted in criticism of socialism. GDR socialism was unable to remedy the “remnants of capitalism ” (as it liked to call environmental problems); and he made "ecology" a taboo subject. In this respect, simply taking up the issue of criticism was "hostile-negative" for the Stasi.

The "leading science" of this movement was ecology or political ecology . But when the word “ecology” found its way into everyday language, its meaning changed. The initially neutral ecological science was given a positive impression, so that "ecological" became synonymous with "environmentally friendly, clean, considerate, biodegradable, harmless" etc.

In its origins and heyday, the second environmental movement developed characteristic subcultural forms in the 1970s and 1980s , which continue to have an impact today. As a rule, their supporters (often also called " eco ") pursued reform goals that went beyond environmental protection and were reflected in an "alternative lifestyle". In the early years, the “ecos” were mostly part of a left - wing youth culture spectrum that became increasingly differentiated in the late 1970s. Particularly evident was the demarcation for simultaneous disco scene and the poppers . The eco-scene developed a characteristic aesthetic that developed from the hippie aesthetic and was characterized by natural materials as well as exotic patterns and batik . The style of clothing was decidedly casual, hair was often worn long and open.

The GDR environmental movement, as far as it was independent, started in part from the Protestant churches. In part, the lifestyle of its members was similar to that of the western eco-scene. But there were different colors: from more anarchistic (such as the East Berlin “ Environmental Library ”) to more bourgeois (e.g. the Dresden Ecological Working Group).

For the traditional churches and their members, the motives and forms of expression of the environmental movement in both parts of Germany often remained incomprehensible and incomprehensible. In West Germany, the Protestant student communities were significantly involved.

Persecution and murder of environmental activists

In many countries, especially in developing and emerging environmental activists are not only in authoritarian written , but also democratic states (such. As Brazil ) harassment , for example, paramilitaries , the army or police and criminal gangs and rebels, as well as by farmers and Representatives of for-profit corporations exposed, harassed and threatened with arrest , or at risk of torture or murder . According to a report by the non-governmental organization Global Witness , z. For example, 185 environmental activists were murdered worldwide in 2015. At least 212 environmental activists were killed worldwide in 2019. In 2020, at least 227 people worldwide were murdered for their environmental activism, more than a hundred of them in Latin America alone. Most of the cases are related to forestry projects, according to Global Witness. In second place followed water and dam construction projects. Violent crimes also occur in connection with processes in agriculture. The NGO assumes that the actual number of environmentalists killed is significantly higher.

A central and media-widespread field of activity of the environmental movement is climate protection , whereby climate change is viewed as part of the global environmental problem that is also related to the extinction of species . The well-known climate protection activist Greta Thunberg warned in April 2021 that only three percent of all ecosystems were intact. Deforestation , species extinction and climate change are linked.

Some nature conservation associations are institutionalized remnants of the first environmental movement, the second environmental movement in West Germany found its institutional expression, among others. in the establishment of an environment ministry , the Federal Environment Agency and the establishment of the Green Action Future (GAZ) in 1978. In 1980, " The Greens " were founded as the first federal party, from which the ÖDP split off in 1982 . In the GDR, political institutionalization began as ecclesiastical: between 1987 and 1989 representatives of peace, environmental and justice groups as well as representatives of all Christian churches met for “ ecumenical assemblies”. This achieved a new quality and commitment for all three subject areas. In 1989/1990 the East German environmental movement split over the question of whether there should be an ecological party. The supporters founded the Green Party in the GDR , the opponents of founding a party united in the Green League network . What was striking about the programs of all GDR parties founded in 1989 and 1990 was the strong ecological component. The New Forum , the Peace and Human Rights Initiative (IFM) and Democracy Now formed Alliance 90 , which merged with the West German Greens in 1993. The Green Party in the GDR had already taken this step in 1990.

With increasing acceptance of the environmental movement, attempts by the modern right-wing extremists and the New Right increased in the 1980s and 1990s to re-associate environmental and nature protection with ethnic, racist and anti-Semitic content and to reconnect with the ideological traditions of nature conservation, in particular homeland protection , to tie in, which also appeared to the National Socialists to be compatible. With Baldur Springmann, for example, Oliver Geden saw an attempt to combine right-wing extremism , ecology and spirituality . The right-wing extremist homeland - loyal German youth referred to the National Socialist concept of home and nature .