The Federal Environment Agency in Dessau-Roßlau , photo from 2011 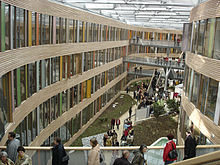 Interior view of the building in Dessau, 2005

In autumn 1969, Willy Brandt became the Federal Republic's first SPD Chancellor; he formed a social-liberal coalition ( Cabinet Brandt I and 1972 Cabinet Brandt II ). Brandt had already called for “ blue skies over the Ruhr area ” when he was first running for chancellor (for the 1961 federal election ) .

As early as the early 1970s, the FDP politician and then Interior Minister Hans-Dietrich Genscher called for the creation of an environmental agency, analogous to the existing agencies in the USA and Sweden . In 1973 the Federal Office for Environmental Affairs was created against the resistance of the Ministry of Health and Science, who feared a loss of competence in the field of environmental protection of the interior converted as an independent higher federal authority based in Berlin. The decision of the German Bundestag of June 19, 1974, which had set West Berlin as the seat of the office, led to official protests by the GDR Foreign Ministry the following day .

After the dissolution of the Federal Health Office (1994) the Institute for Water, Soil and Air Hygiene (WaBoLu) was integrated into the Federal Environment Agency.

Relocation of the office

On May 2, 2005, the office of the Federal Environment Agency was relocated to Dessau-Roßlau (then still Dessau ); A second branch remained in the original building on Bismarckplatz in Berlin .

Presidents of the Federal Environment Agency were the lawyer Heinrich von Lersner from 1974 to 1995, the economist Andreas Troge from 1995 to 2009 and the economist and long-time President of the Nature Conservation Union Germany (NABU) Jochen Flasbarth from 2009 to December 2013. In May 2014, Maria Krautzberger appointed a president for the first time. On January 1, 2020, Professor Dirk Messner took up the post of President of the Federal Environment Agency.

The authority has around 1,600 employees and facilities in Dessau-Roßlau, Berlin, Bad Elster and Langen . In addition, the UBA operates seven of its own measuring stations distributed throughout Germany for measuring the background concentrations of air constituents: ( Westerland , Zingst , Waldhof (Lüneburg Heath) , Neuglobsow , Schmücke , Schauinsland , Zugspitze ).

The UBA is divided into the following units:

The UBA has an environmental management system (UMS) based on the requirements of the Eco Management and Audit Scheme at its headquarters in Dessau and at its branch offices in Berlin ( Grunewald or City Campus until 2025/26 and Marienfelde ), Langen and Bad Elster .

According to the Basic Law, responsibilities are divided between the federal and state governments . In some areas, environmental protection is a federal matter and in other areas it only has the authority of the framework legislation for the states. Therefore, some environmental protection tasks are performed by the state offices responsible for the environment in the federal states, other tasks by the Federal Environment Agency.

The Federalism Reform I has partly led to a new distribution of legislative competences between the Federation and the Länder in the environmental sector. The main changes are:

The federal government now has the competence to issue direct and effective regulations in many areas of environmental law and thus to implement European law promptly and uniformly, for example; the federal states have the right to deviate in certain areas and, in some cases, room to maneuver. The Federal Environment Agency is responsible for enforcing the regulations. This includes the summary of the reports from the federal states required by EU directives and forwarding them to the responsible European authorities, such as the European Environment Agency .

In addition to internal research, including in its own laboratories, the Federal Environment Agency also awards research contracts to scientific facilities and institutes.