A social-liberal coalition is a coalition of a social-democratic or socialist party with a liberal party.

In Germany this term is mainly associated with the red-yellow coalition between the social democratic SPD and the free democratic FDP at the federal level from 1969 to 1982.

As early as 1900 in the German Empire , left-wing liberal politicians like Theodor Barth and Friedrich Naumann were campaigning for a coalition “from Bassermann to Bebel ” in order to promote the democratization of German politics. However, such a liberal-socialist alliance was first realized in the large bloc , which from 1909 to 1913/1914 formed the National Liberals , Left Liberals and Social Democrats in the Grand Duchy of Baden . At the Reich level, liberals and social democrats first worked together during the First World War in the Intergroup Committee , which also included representatives of the Catholic Center Party .

During the Weimar Republic , the Weimar coalition existed for a time , in which the republican parties SPD, Zentrum and DDP were represented, which after 1920 no longer had a parliamentary majority at the Reich level. As a result, there were repeated large coalitions that also included the DVP .

It was only in the (old) Federal Republic that the expression social-liberal coalition was established . Because of the colors of the two parties, the SPD and the FDP , one speaks of a red-yellow coalition .

Since the FDP prefers to form coalitions with the Union parties , social-liberal coalitions are comparatively rare. The first at state level, in North Rhine-Westphalia from 1956, was received by the Liberals as a self-defense reaction: Chancellor Konrad Adenauer wanted to introduce majority voting in the federal government that would have made the FDP meaningless. The FDP left the coalition at the federal level and, with the social-liberal coalition in North Rhine-Westphalia, ensured that Adenauer no longer had a majority in the Bundesrat. After the state elections in 1958, the coalition ended again with the Union's election victory.

After that there were further social-liberal coalitions at the state level, but the second social-liberal coalition in North Rhine-Westphalia (since 1966) was given special importance. It is an experiment for such a coalition for the first time at the federal level. The federal presidential election in March 1969 was considered a test case at the federal level: SPD candidate Gustav Heinemann received a slim majority with the majority of the FDP votes. 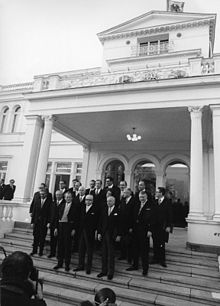 The social-liberal Brandt II cabinet with Federal President Gustav Heinemann , 1972. Overall, the collaboration lasted from 1969 to 1982.

The FDP received 5.8% of the vote in the federal election in September 1969. In October 1969 an SPD-FDP coalition came about at the federal level. SPD leader Willy Brandt granted the FDP under Walter Scheel important ministerial posts that it had never received from the Union (exterior and interior, later also economy). In addition, another attempt by the Union to introduce majority voting was still in the air. The basic program of the FDP from 1971, the Freiburg Theses , then oriented the FDP in the direction of reform-oriented “ social liberalism ” and contained a separate section on environmental protection , for the first time in German history within the main parties.

In the early years of the Federal Republic of Germany, black-red-yellow coalitions were also realized, namely in Bremen 1951–1959 and in Saarland 1955–1959.

The first social-liberal coalition in North Rhine-Westphalia was formed in 1956, after the black-yellow coalition under Prime Minister Arnold was broken. Arnold was voted out of parliament by a vote of no confidence and replaced by Fritz Steinhoff.

This cooperation only lasted until the state election in 1958 , in which the opposition CDU managed to achieve an absolute majority. A new coalition was formed between the SPD and FDP six months after the state elections in 1966 . In this election, the SPD achieved 49.5 percent of the votes cast and 99 of the 200 state parliament mandates. The black-yellow coalition that had existed since 1962 initially continued its government under Franz Meyers . Just six months later, the black-yellow coalition broke up, so that Heinz Kühn was elected Prime Minister with the votes of the SPD and FDP.

In historical retrospect, this coalition formation in the most populous federal state is ascribed a certain signaling effect for the 1969 Bundestag election , after which the first social-liberal federal government came about.

The coalition in North Rhine-Westphalia lasted until the state elections in 1980 , in which the FDP left the state parliament and the SPD achieved an absolute majority.

After the state elections in 2000 , Prime Minister Wolfgang Clement negotiated not only with his previous coalition partner Bündnis 90 / Die Grünen, but also with the FDP about a new edition of the social-liberal coalition. As a result, the SPD decided to continue Red-Green.

The coalition ( Federal Government Sinowatz and Federal Government Vranitzky I ) between the SPÖ and the FPÖ , at that time a member of the Liberal International , can also be described as social-liberal . The then FPÖ chairman Norbert Steger from the liberal wing of the party tried to push back the national wing and to position the party as the Austrian FDP. In common parlance, this coalition was mostly called the small coalition or, according to the party colors, the red-blue coalition .

After Jörg Haider was elected as the new FPÖ chairman in 1986, the SPÖ terminated the coalition, while the FPÖ adopted a right-wing populist course that has been maintained to this day. The repression of the liberal wing culminated in the exit of the FPÖ from the Liberal International and the split of the Liberal Forum in 1993. Subsequent red-blue coalitions, such as the Niessl IV state government , can therefore not be described as social liberal .

A cooperation between the social democratic Labor Party and the liberal Liberal Democrats (or their predecessor party, the Liberal Party ) is generally referred to as a Lib-Lab Pact (more rarely Lab-Lib Pact ).

At the beginning of the 20th century Labor governments were formed several times with the tolerance of the Liberals, or constituency agreements were made to prevent a Tory government . From 1978 to 1979 there was formal cooperation between the Labor Party and the Liberals after the government under James Callaghan lost its majority in the lower house after a by-election. It was not a real coalition, but a tolerance agreement (" confidence and supply "). After a loss of confidence in the House of Commons, the toleration ended in March 1979, as a result of which there were general elections in 1979 , which resulted in a conservative majority government under Margaret Thatcher .