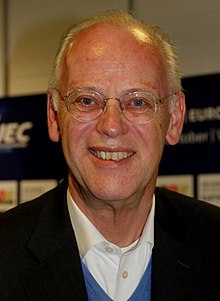 From 1991 to 1994 he was Prime Minister of the State of Rhineland-Palatinate and from 1998 to 2002 Federal Minister of Defense . From 1993 to 1995 he was also federal chairman of the SPD and was a candidate for chancellor in the 1994 federal election . From March 1995 to May 2001 he was party leader of the Party of European Socialists (PES) . Since leaving the Bundestag in 2005, he has largely withdrawn from public policy. Since 2005 he has been President of the Association of German Cyclists .

After graduating from high school in Lahnstein in 1966, Scharping volunteered as a soldier for two years in the German Armed Forces , but was given leave of absence after a few weeks with Fighter Bomber Squadron 33 in Büchel / Eifel because of his poor eyesight and released after six months.

From 1966 he studied law and sociology at the University of Bonn . After five semesters, he switched to political science as a major and passed his master's degree (MA) in 1974 . His master's thesis has the title Problems of a regional election campaign using the example of the 1969 Bundestag election campaign of the SPD in the constituency of Bad Kreuznach . 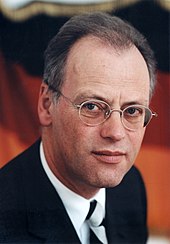 Rudolf Scharping in his time as Minister of Defense (around 2000)

Scharping became a member of the SPD in 1966. In 1968 a party order procedure was initiated against him because he had distributed leaflets against the purchase of the Starfighter . However, the case was dropped after ten months. From 1969 to 1974 he was state chairman of the Jusos in Rhineland-Palatinate, from 1974 to 1976 its deputy federal chairman.

In the 1987 state elections , he ran for the first time as the top candidate against Prime Minister Bernhard Vogel (CDU) and won 38.8% of the votes for the SPD (minus 0.8 percentage points). The CDU remained the strongest party with 45.1% (minus 6.8). After Bernhard Vogel's withdrawal, the SPD became the strongest party in 1991 with 44.8%. Scharping, who again ran as the top candidate against Prime Minister Carl-Ludwig Wagner (CDU), became Prime Minister on May 21, 1991. He was the first Social Democrat in this office after 44 years in the CDU .

After the resignation of the SPD federal chairman Björn Engholm in 1993, a relative majority of SPD members voted in a primary election for Scharping as party chairman. He prevailed against his two opponents Gerhard Schröder and Heidemarie Wieczorek-Zeul . At a special party conference in Essen, Scharping was elected federal chairman of the SPD.

In the 1994 federal election , Scharping ran as candidate for Chancellor. The SPD achieved 36.4% and thus gained 2.9 percentage points, but lagged behind the Union by 41.4% (minus 2.4). Scharping resigned as prime minister on October 15, 1994 and became chairman of the SPD parliamentary group and opposition leader .

The disappointing result of the federal election was followed by several defeats in state elections; Criticism of the chairman grew, who seemed awkward and awkward when dealing with the media and people. At the Mannheim party congress in November 1995, he was originally supposed to run for re-election without a candidate. His application speech disappointed, however, in stark contrast to the combative speech of Oskar Lafontaine the following day, who was then invited by several delegates to run. In the following battle vote for party leadership, Scharping was clearly defeated by 190 to 321 votes.

Scharping was then until 2003 one of five deputy federal chairmen of the SPD and from March 1995 to May 2001 chairman of the Social Democratic Party of Europe (SPE).

In the 1998 and 2002 federal elections , he entered parliament for the first time as a directly elected member of the Montabaur constituency . In 1994 he entered the Bundestag via the Rhineland-Palatinate state list. In 2005 he left parliament.

Rudolf Scharping (right) with US Secretary of Defense Donald Rumsfeld (2001)

Defense Secretary Scharping (left) with his US counterpart William Cohen (1998)

From October 27, 1998 to July 18, 2002, Scharping was Federal Minister of Defense and the first under whose leadership the Bundeswehr took part in a war, the Kosovo War .

During his tenure, Scharping initiated the Hercules IT project , which was supposed to renew the telecommunications structure of the entire Bundeswehr.

NATO's intervention in the Kosovo war met with criticism from parts of the population , not only because compliance with the Basic Law and international law was controversial. Scharping repeatedly justified the war with imminent atrocities and the alleged Serbian " horseshoe plan " for the military expulsion of the Albanians from Kosovo. However, today it is controversial whether and how far this plan actually existed.

In July 2002, Scharping was dismissed by Chancellor Schröder. The reasons for the dismissal shortly before the federal election in 2002 are the Mallorca affair , the Hunzinger affair and the loss of reputation and respect in the Bundeswehr. Among other things, he had himself photographed for the magazine Bunte with his partner Kristina Countess Pilati-Borggreve in the swimming pool on Mallorca, while at the same time the Bundeswehr was about to be deployed in Macedonia . This process had already come to a head at the beginning of September 2001 and brought Scharping into criticism, but because of the terrorist attacks on September 11, 2001 , the topic fell out of the public eye again. The trigger for his dismissal was Scharping's affairs over "fee payments and expensive purchases"; But above all, Scharping had weakened himself through "mistakes that were more likely to be found in private and personal behavior". In this context he lacks "the necessary insight into how he should treat the changes in his private environment discreetly in public".

Scharping at the annual general meeting of the BDR on March 21, 2009 in Leipzig.

Scharping is the managing partner of RSBK Strategy Consulting Kommunikation GmbH, a company based in Frankfurt am Main, which u. a. specializes in the field of public-private partnership . From 2007 he advised the private equity firm Cerberus , which specializes in the takeover of nearly insolvent companies. From May 2009 at the latest, Scharping worked as a consultant for Maria-Elisabeth Schaeffler . One of his tasks was to negotiate for the company management with the employee representatives and trade unions and to support the Schaeffler Group in the takeover of Continental AG .

Scharping is co-owner of the bankruptcy estate of the Austrian Teak Holz International .

On November 2, 2000, the Anti-Defamation League (ADL) in New York awarded him the Paul Ehrlich - Günther K. Schwerin - Human Rights Prize for his commitment to naming the Feldwebel Schmid barracks in Rendsburg.

Defense Ministers of the Federal Republic of Germany

State chairwoman of the SPD Rhineland-Palatinate

President of the BDR

Between 1933 and 1948 the German Association was called the Deutscher Radfahrer-Verband (DRV), and the association leaders were appointed. From 1937 to 1945 the DRV was led by Viktor Brack , who was executed as a convicted war criminal in 1948.