Andrea Maria Nahles (born June 20, 1970 in Mendig ) is a former German politician ( SPD ) and today's president of the Federal Agency for Post and Telecommunications . From April 2018 to June 2019 she was the first woman to hold the SPD chairmanship and from September 2017 to June 2019 the first chairwoman of the SPD parliamentary group . Before that, she was Federal Minister for Labor and Social Affairs from December 2013 to September 2017 and SPD General Secretary from November 2009 to December 2013 . From October 1998 to October 2002 and from October 2005 to October 2019 she was a member of the German Bundestag and from September 1995 to May 1999 she was federal chairwoman of the Jusos .

Andrea Nahles and her younger brother grew up as children of master mason Alfred Nahles (1941–2014) and his wife Gertrud (née Gondert) in a Catholic middle - class family in Weiler (near Mayen) in the Vulkaneifel . Nahles attended elementary school in Weiler until 1980. In Mayen she was 1980-1986 schoolgirl at today's Albert-Schweitzer-Realschule plus. At the Megina-Gymnasium Mayen Nahles achieved the general higher education entrance qualification in 1989 , in the Abitur newspaper she stated her career aspiration as " housewife or federal chancellor ".

Nahles graduated with a Magistra Artium in 1999, when he began studying modern and older German and political science at the Rheinische Friedrich-Wilhelms-Universität Bonn . She submitted her master's thesis entitled The Function of Disasters in the Series Romance Novel to Jürgen Fohrmann . During her studies she worked for a member of the Bundestag. From 2002 to 2003 she managed the IG Metall office in the capital together with Michael Guggemos . In 2004, she started with a grant from a promotion at the Rheinische Friedrich-Wilhelms University in Bonn on operations of identificatory reading the example of the historical novel . When she returned to the Bundestag in 2005, she stopped working on her doctorate.

Nahles lives in a farm in Weiler on which her great-grandparents lived. She is a practicing Catholic and cites her belief as the reason for her political engagement. She has been a member of the parish of St. Kastor in Weiler since she was baptized in 1970 and was one of the first altar servers there in her childhood . In 2009 she published her biography entitled Woman, believing, left. What is important to me. Because of a hip problem after a hip injury sustained in 1986 in a long jump, she is severely disabled ( GdB 50 ). From 1997 to 2007 Andrea Nahles was in a relationship with the union official and then board member ( ThyssenKrupp Elevator , Audi and Volkswagen AG ) Horst Neumann . On June 18, 2010 she married the art historian Marcus Frings. In 2011 she gave birth to a daughter and returned to work eight weeks after the birth. On January 15, 2016, the Nahles / Frings couple announced their separation to the public.

From 1993 to 1995 Nahles was state chairwoman of the Jusos Rhineland-Palatinate. In 1995 she was elected as the successor to Thomas Westphal as the federal chairman of the Jusos and was chairman until 1999. “The new Juso boss, who likes to refer to her work in women's politics, attaches importance to the fact that she does not belong to either of the two big camps - Stamokap and reform socialists - within the Jusos. She was elected with the votes of the traditionalist left ”, wrote the daily newspaper in 1995. The then SPD chairman Oskar Lafontaine called Nahles a“ gift from God to the SPD ”during her time as federal chairman of the Jusos.

Nahles was a member of the German Bundestag for the first time from 1998 to 2002 and again from 2005 to 2019 . From 1998 to 2002 and from 2005 to 2007 she was deputy spokeswoman for the parliamentary group's working group Labor and Social Order and Labor and Social Affairs, and from 2007 to 2009 its spokesperson. From 2008 to 2009 she was also a member of the executive committee of the SPD parliamentary group. Nahles always entered the Bundestag via the Rhineland-Palatinate state list . In the constituency of Ahrweiler she was always subject to the CDU candidate. In 2006 Angela Marquardt became her employee. Nahles' membership in the parliamentary left was suspended from January 2018. She was also a member of the think tank in the SPD parliamentary group , an association of predominantly younger left-wing SPD members.

On October 31, 2005, Nahles prevailed in the party executive committee in a voting for the nomination for general secretary with 23 to 14 votes against Kajo Wasserhövel , who had been proposed by the then party chairman Franz Müntefering . Because of this, Müntefering no longer ran for the party chairmanship. Nahles was heavily criticized by parts of the SPD; in the end she renounced the candidacy for general secretary and also refused the office of deputy party chairman, for which Matthias Platzeck had proposed her.

In May 2007 Nahles was nominated together with Peer Steinbrück and Frank-Walter Steinmeier by the SPD party executive for the office of deputy party chairman and on October 26, 2007 was elected by 74.8% of the party congress delegates. On July 30, 2009, the SPD's candidate for Chancellor, Frank-Walter Steinmeier, accepted Nahles into his shadow cabinet for the 2009 Bundestag elections and made her responsible for education and integration. After the Bundestag election, which was lost by the SPD, she took over the office of SPD General Secretary from Hubertus Heil . She was elected to this office on November 13, 2009 with 69.6% of the delegate's votes. In 2011 she was re-elected with 73.2% of the vote and in 2013 with 67.2% of the vote. After Nahles was appointed Federal Minister for Labor and Social Affairs at the end of 2013, Yasmin Fahimi was elected as her successor as General Secretary at a special party conference on January 26, 2014 with 88.5% of the votes.

From December 17, 2013 to September 28, 2017, Nahles was Federal Minister for Labor and Social Affairs in the Merkel III cabinet . Under her responsibility, the statutory minimum wage was introduced in Germany on January 1, 2015 . Furthermore, a pension reform was decided in 2014 under her responsibility, with higher benefits for mothers (" Mütterrente "), a pension after 45 years of contribution (" Pension at 63 ") and an increase in the disability pension . The Unified Collective Bargaining Act was also drawn up under their responsibility and passed in 2015.

According to party information, the SPD parliamentary group in the Bundestag elected Nahles as the new chairman on September 27, 2017 with 137 of 152 votes cast. 14 MPs voted against Nahles, there was one abstention. This corresponds to an approval rate of around 90%. During her last cabinet meeting, she said, referring to the federal government, “from tomorrow they'll get in the face”. She then repeated the sentence in the SPD parliamentary group meeting and to journalists. The statement was criticized in some media comments. Other commentators defended Nahles and particularly refused to equate it with the political style of the AfD parliamentary group leader Alexander Gauland . Nahles said the following day that her statement was clearly recognizable as a joke, and after two days regretted that the statement did not annoy anyone more than herself.

Nahles at the 2018 federal party conference, which elected her as the SPD chairwoman

After Martin Schulz resigned from the SPD chairmanship on February 13, 2018, the SPD presidium proposed Nahles as his successor. The election took place on April 22, 2018 at an extraordinary federal party conference in Wiesbaden . Nahles was elected with 414 votes (66.35%), while her opponent, Mayor of Flensburg , Simone Lange , received 27.6% with 172 votes. Nahles thus received the second worst result in the history of an SPD chairman election , only Oskar Lafontaine achieved a worse result in the previously only election with multiple candidates in 1995 with 62.6% of the delegate's votes. Nahles was the first woman in this office.

After increased pressure on her due to the historically poor results of the SPD in the 2019 European elections , Nahles announced on June 2, 2019 that she wanted to give up the party and parliamentary group chairmanship and her mandate in the Bundestag. She resigned as party chairman the next day with immediate effect, and gave up the parliamentary group chairmanship on June 4th. On October 14, she announced that she would resign from the Bundestag as of November 1. For them, moved Joe Weingarten after. In June 2020 she was elected President of the Federal Office for Post and Telecommunications . She took up office on August 1, 2020. 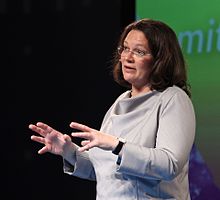 From 2000 to 2004, Nahles was a member of the ZDF television council as a representative of the SPD . She is co-editor of the Spw - magazine for socialist politics and economy , after her election as party leader also of the Neue Gesellschaft / Frankfurter Hefte . Since 2004 Nahles has been the chairwoman of the Willy Brandt Center Jerusalem and chairwoman of the advisory board of the party school in the Willy Brandt House . She is also a member of Attac , Eurosolar , IG Metall , the Catholic Women's Community in Germany and the Central Committee of German Catholics .

In August 2013, Nahles planned to found a network of party-affiliated broadcast controllers and therefore invited the SPD representatives from the broadcasting councils and the ZDF television council to telephone conferences. This has been criticized as an attempt to influence the work of the public service broadcaster's inspectors.

The changes to the workplace ordinance planned by Nahles in spring 2015 were criticized and subsequently not implemented.

The plan submitted by Nahles in April 2016 draft law amending the SGB II stipulated that single parents, the Hartz IV relate the social allowance would have been painted for their children for each day that the children had spent the other parent. After public criticism, the change was not implemented.

Nahles' decision to dissolve the historical commission of the SPD led to criticism. A call by historian Christina Morina against the dissolution was drawn up by over 1100 historians.

After the controversial statements made by the President of the Office for the Protection of the Constitution, Hans-Georg Maaßen, on the riots in Chemnitz , Nahles initially demanded his dismissal, but a few days later he supported his promotion to State Secretary in the Federal Ministry of the Interior , for which the SPD State Secretary Gunther Adler was to be put into temporary retirement . After public criticism, the coalition partners intended that Maaßen should become a special advisor in the Federal Ministry of the Interior without promotion. Due to another conflict, Maassen was put into temporary retirement.

On the initiative of Nahles, Luisa Boos from Baden-Württemberg and Delara Burkhardt from Schleswig-Holstein were given top places on the list of candidates for the 2019 European elections proposed by the federal board for the delegates' conference , although Evelyne Gebhardt and Enrico Kreft were elected as their top candidates by the state associations. Nahles wanted to achieve that more young women are represented on the promising list places. The state chairmen Leni Breymaier and Ralf Stegner voted against the list proposal and criticized the change. Boos then swapped their position 15 on the list with Gebhardt's position 25. Kreft was ranked 30th on the list, which is considered hopeless.

When Marco Bülow left the parliamentary group , the SPD lost a seat in the committee for economy and energy and the parliamentary group leadership decided that Florian Post , who is considered a critic of Nahles, had to leave the committee. Post, other SPD MPs and the media rated this as a punitive measure for his dissenting opinions. Post accused Nahles of demanding unconditional obedience and surrounding herself with a clique of functionaries that ignored critics.

Labor and Social Affairs Minister of the Federal Republic of Germany