Kühnert's father is a civil servant in a Berlin district administration, his mother works in a job center . He obtained his Abitur in 2008 at the Beethoven-Gymnasium in Berlin-Lankwitz , where he was also the student representative . He then completed a voluntary social year in the Steglitz-Zehlendorf children's and youth office .

He broke off a degree in journalism and communication studies that he had begun at the Free University of Berlin in 2009 and which he had previously sued and then worked in a call center for three and a half years . From 2014 to 2016 he worked in the parliamentary office of Dilek Kalayci and since 2016 in the office of Melanie Kühnemann . A degree in political science at the Distance University in Hagen, which began in 2016, has been suspended since his election as federal chairman of the Jusos.

In his youth he played handball at VfL Lichtenrade. He is a fan of the football clubs Tennis Borussia Berlin , Arminia Bielefeld and FC Bayern Munich . From June 2013 to May 2017 he was a member of the Supervisory Board of Tennis Borussia Berlin. He got his first name after the English striker Kevin Keegan , whose fan his mother is.

In 2018, he made his first public statement about his homosexuality in an interview in the Siegessäule magazine . He lives in a shared apartment in Berlin-Schöneberg .

Kühnert joined the SPD in 2005 and was state chairman of the Jusos Berlin from 2012 to 2015. From 2015 he acted as Deputy Federal Juso Chairman and was responsible for the topics of tax policy , pension policy , structural policy , right-wing extremism and migration policy as well as for social media work. After Johanna Uekermann did not run again for the Juso election, the federal congress in Saarbrücken elected him on November 24, 2017 with 225 of 297 votes as federal chairman of the Jusos. On November 22, 2019, he was confirmed in office for another two years at the federal congress in Schwerin . He received 264 of 298 votes cast. In August 2020 he announced his intention to resign early in November 2020. Within the Jusos he belongs to the Network Left Center (NwlZ), one of the two left wings of the association.

At the federal party conference on December 6, 2019, Kühnert was elected Deputy Federal Chairman of the SPD with 70.4 percent of the delegate's votes. Since February 2020 he has been responsible for the SPD party executive for real estate, construction and housing.

In August 2020 he announced that he wanted to run for the 2021 federal election in the constituency of Berlin-Tempelhof - Schöneberg .

Kühnert describes himself as a socialist . He advocates polarization between the major popular parties so that right-wing populists cannot present themselves as a supposed alternative; he calls for the taxation of assets , a higher minimum wage and the fight against temporary agency work .

After his election as Juso federal chairman, Kühnert spoke out against the formation of a new grand coalition ("#NoGroKo"). Among other things, he argued against a continuation that in the Merkel III cabinet the glyphosate decision was made against a clear cabinet decision . With regard to a “cooperation coalition ” discussed in the SPD, i.e. a tolerance of a minority government , he said in an interview in December 2017: “Many people who do not want a grand coalition have a very keen sense of when an attempt is made to give them an alternative one Model for sale, […] “During the exploratory talks on the formation of a grand coalition in January 2018, he reiterated his position and instead spoke out in favor of a minority government. 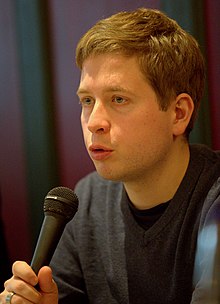 After the SPD party conference on January 21, 2018 in Bonn , the Jusos intensified their #NoGroko campaign and called on supporters to join the SPD under the motto “Step in, say no” in order to prevent the grand coalition from voting . SPD general secretary Lars Klingbeil criticized the Juso action: “If you now say, 'Come in: for 10 euros you stay a member for two months, vote against the grand coalition and then go out again', that does not correspond to my party -I understand work. This also reduces the value of membership. We should clearly agree that something like this won't work. ”For his part, Kühnert emphasized that the Jusos wanted to recruit new members who would join the SPD out of conviction,“ because they share our basic values. If these members then follow our argument to reject the grand coalition, there is nothing disreputable about it. ”On February 1, 2018, in an interview with Jan Böhmermann in Neo Magazin Royale , he repeated his criticism of the coalition negotiations and accused the CSU of“ racist bullshit ”, which the SPD should use as an opportunity to break off the talks.

As in 2013 , the SPD had members voted on the question of whether the party should form a coalition with the CDU / CSU. The relevant ballot papers had to be sent back by March 2nd. Previously, Kühnert toured through the Federal Republic to advertise in front of members and the interested public for the rejection of a grand coalition. At panel discussions he had a representative of the pro position as a counterpart. The campaign was accompanied by radio and TV interviews and participation in programs such as Markus Lanz . As a result, Kevin Kühnert gained notoriety beyond Germany.

Kevin Kühnert called for Labor Day on May 1, 2018 in the Rheinische Post for a significant increase in the minimum wage from 8.84 euros to at least twelve euros per hour during the current electoral term: “To make the minimum wage poverty-proof, he would have to already today be twelve euros or more. "

Kevin Kühnert criticized the situation of recipients of ALG II on May 1, 2018 : "Existing harassment should be abolished, the sanction options first." He criticized the fact that many people got stuck in nonsensical training measures or had to struggle to repair household appliances.

In the discussion program Maischberger in March 2019, Kühnert questioned the concept of property and saw an inherent constant tendency towards unequal distribution. “With what right does someone have more than twenty apartments?” On May 1st, Kühnert spoke in an interview with the weekly newspaper Die Zeit of his personal utopia and said in this context: “Without collectivization , overcoming capitalism is unthinkable.” He explained that Collectivization using the example of the automobile manufacturer BMW brought into play by the interviewers . In addition, Kühnert demanded that "everyone should have at most the living space in which they live." His ideas sparked a broad social debate:

Representatives of the CDU / CSU, FDP and AfD strongly criticized Kühnert's theses. Federal Transport Minister Andreas Scheuer (CSU) saw Kühnert's positions as the "eccentric retro worldview of a stray fantasist". There were also negative expressions from the Greens and parts of their own party. SPD General Secretary Klingbeil said that Kühnert's statement was “not a requirement of the SPD”. Kühnert, however, received encouragement from the left SPD wing and the left. Katja Kipping (left) sees through his statements "The common good (...) again more in the center". Kühnert himself said that the violent criticism of his position shows "how narrow the limits of what is imaginable have become".

Kühnert speaks out in favor of a democratic organization of the economy. In particular, employees of commercial enterprises who Kühnert trusts to make more sustainable decisions than only temporarily employed management should receive shares in the company.