Dietmar Woidke (* 22. October 1961 in Naundorf , district Cottbus , GDR ) is a German politician of the SPD . Since August 2013, he has been the third Prime Minister of the State of Brandenburg since 1990. Since November 1, 2019, he has been President of the German Federal Council in accordance with the election cycle .

Woidke grew up in Lower Lusatia with a brother on a farm in the Forst district that has been owned by the family for centuries . His father was a locksmith and his mother the chief accountant of an agricultural production cooperative (LPG). After high school graduation in 1980 and 18 months of basic military service with the National People's Army in Cottbus , Woidke studied agriculture and animal production / nutritional physiology at the Humboldt University in Berlin from 1982 . He graduated in 1987 with a degree in agricultural engineering . From 1987 to 1990 Woidke was a research assistant at the Institute for Nutritional Physiology in East Berlin . From 1990 to 1992 he headed the scientific department of the mineral feed manufacturer SANO-Mineralfutter GmbH. From 1992 to 1993 he was head of the environment and agriculture in the district of Forst , and after the Brandenburg district reform until his election to the Brandenburg state parliament in 1994, he was the head of agriculture in the district of Spree-Neisse . In 1993 he received his doctorate at the Humboldt University in Berlin after successfully defending his dissertation on the subject of laboratory tests on straw preservation with the addition of urea-sucrose and the dry matter breakdown of the preserves using the nylon bag method .

Woidke is a member of the Evangelical Church Berlin-Brandenburg-Silesian Upper Lusatia . He is married to Susanne Woidke for the second time. The couple each have a daughter from their first marriage and live in Forst (Lausitz) .

In the state parliament he was deputy chairman of the committee for food, agriculture and forestry from 1994 to 1999 and from 1999 to 2004 a member of the committee for agriculture, environmental protection and regional planning. At times he headed the lignite committee of the state of Brandenburg. After he was not considered for the state cabinet in 2009, he took over the office of parliamentary group leader of the SPD parliamentary group from November 2009 until his appointment as interior minister in October 2010 and became a member of the presidium of the state parliament. From December 2009 to November 2010 he was also chairman of the main committee of parliament.

From 1998 to 2003 he was also a city councilor in Forst (Lausitz) and from 1998 until his appointment as minister in 2004 he was a member of the district council of the Spree-Neisse district . In the local elections in 2008, Woidke was again elected as a city councilor in the city council of Forst (Lausitz) and as a member of the Spree-Neisse district council. He returned these mandates in October 2010 in connection with his appointment as Minister of the Interior of the State of Brandenburg.

From October 13, 2004 to October 21, 2009 Woidke was Minister for Rural Development, Environment and Consumer Protection in the State of Brandenburg. After the state elections in 2009, he was no longer scheduled for any government post in order to increase the number of women in the cabinet.

After the resignation of Interior Minister Rainer Speers on September 23, 2010, Prime Minister Matthias Platzeck appointed Woidke as his successor on October 6, 2010. Ralf Holzschuher became the new SPD parliamentary group leader . As Minister of the Interior, Woidke was in charge of modernizing the administration in the state of Brandenburg. In this function, he was chairman of the advisory board in accordance with the collective agreement on measures to support the restructuring of the Brandenburg state administration (TV conversion).

One of the largest reform projects for which Woidke was responsible as Interior Minister was the police reform in Brandenburg. It aimed to reduce the workforce in the Brandenburg police force from around 8,800 in 2010 to 7,000 by the beginning of 2020. Up until now, Brandenburg had two police headquarters, a state criminal investigation office and a state operational unit (LESE). On December 16, 2010, the Brandenburg state parliament approved the bill to pool these authorities in a new police headquarters with effect from January 1, 2011.

Prime Minister of Brandenburg (2013 to date) 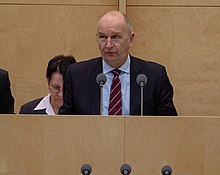 Dietmar Woidke as President of the Federal Council, 2019

After the resignation of Matthias Platzeck , Woidke was elected the third Prime Minister of Brandenburg on August 28, 2013.

After the state elections in Brandenburg in 2019 , Woidke declared that he would stand for re-election as Prime Minister of Brandenburg. Since the SPD was just about the strongest party before the AfD , appropriate coalition negotiations are possible. On November 20, 2019, he was re-elected as Prime Minister in the state parliament with the votes of the SPD , CDU and Alliance 90 / The Greens (47 to 37 votes, with three abstentions).

Woidke was president of the Brandenburg Cycling Association from 2006. He held this office for a period; In 2008 he was no longer a candidate. He was also chairman of the board of directors of the Neisse-Spree waste disposal company. Since January 29, 2014, he has also been the coordinator for German-Polish inter-societal and cross-border cooperation at the Federal Foreign Office .

Prime Minister of the State of Brandenburg

Cabinet of the State of Brandenburg

Interior Minister of the State of Brandenburg

State chairwoman of the SPD Brandenburg

Chairwoman of the SPD parliamentary group in the Brandenburg state parliament