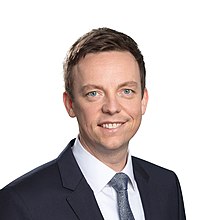 Tobias Theodor Hans (born February 1, 1978 in Neunkirchen ) is a German politician ( CDU ). He has been Prime Minister of Saarland since March 2018 and chairman of the CDU Saar since October 2018 .

Tobias Hans grew up with his younger brother in a Catholic family. He is the older of two sons of the former CDU parliamentary group leader Peter Hans (1950–2007). After graduating from high school at the Christian von Mannlich-Gymnasium in Homburg in 1997 and subsequent civil service at the Psychosomatic Clinic in Münchwies, Hans studied business informatics , information science and English studies at the Saarland University from 1998 , but without obtaining a degree. In addition to his studies, he worked as a "student research assistant" at the Münchwies Psychosomatic Clinic until the end of 2005. In 2006 Hans was a research assistant in the CDU parliamentary group. From 2007 until his election to the Saarland state parliament in 2009, he was the personal advisor to the Saarland Minister for Justice, Labor, Health and Social Affairs, first to Minister Josef Hecken and then to his successor Gerhard Vigener .

When Tobias Hans became a personal advisor in the Saarland Ministry of Justice, Labor, Health and Social Affairs in 2007, he broke off his studies at Saarland University after 18 semesters.

Tobias Hans in the state parliament on June 21, 2017, Annegret Kramp-Karrenbauer on the left

In the direct election of the district administrator in the Neunkirchen district on November 8, 2015, Hans ran for the CDU. He lost in a runoff election on November 22nd against Sören Meng ( SPD ). Two days later he was elected as the new parliamentary group leader of the CDU in the Saarland state parliament, succeeding Klaus Meiser .

Prime Minister of Saarland since March 2018

On March 1, 2018, he was elected Prime Minister of the Saarland with the vote of 40 members of parliament and thus succeeded Annegret Kramp-Karrenbauer , who moved to federal politics as the new Secretary General of the CDU . The government he leads is supported by the coalition of CDU and SPD that has existed in Saarland since 2012.

Tobias Hans is the first prime minister in the history of the Saarland to be sworn in without an academic degree or professional training.

On October 19, 2018, Hans was elected as the new chairman of the CDU Saar with 96.4 percent of the votes at the 68th state party conference .

In the course of reporting on his upcoming election as Prime Minister of Saarland, irregularities were discovered in his curriculum vitae. Although he stated that he had dropped out of his studies, he concealed this on his own homepage. He also called himself an “information scientist” in one election. His status as a "research assistant" at the Psychosomatic Clinic , which was later described by a spokeswoman with the designation "student research assistant", was also unclear .

Hans is Roman Catholic and married. With his wife Tanja, he lives and runs a horse farm in Münchwies . The two have been parents to twins since autumn 2018.

Cabinet of the Saarland

Other cabinet members: Henrik Eitel ( Head of the State Chancellery ) | Jürgen Barke ( State Secretary in the Ministry of Economic Affairs )

Saarland Minister of Culture since 1946

Chair of the CDU parliamentary group in the Saarland state parliament

State chairwoman of the CDU Saar