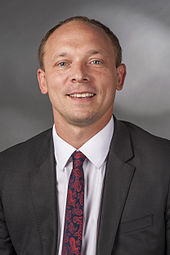 Marco Wanderwitz (born October 10, 1975 in Karl-Marx-Stadt , GDR ) is a German politician ( CDU ). Since January 2014 he has been the cultural and media policy spokesman for the CDU / CSU parliamentary group and from March 2018 to February 2020 he was Parliamentary State Secretary to the Federal Minister of the Interior, Building and Home Affairs .

In February 2020 he was proposed as the successor to Christian Hirte as the Federal Government's Eastern Commissioner and at the same time as Parliamentary State Secretary to the Federal Minister for Economic Affairs and Energy .

After graduating from high school in 1994 at the “ Prof. Dr. Max Schneider ”in Lichtenstein / Sa. Wanderwitz did his military service and, from 1995, studied law at the Technical University of Dresden and the University of Potsdam , which he completed in 2000 with the first state examination in law. After his legal clerkship , he passed the second state examination in 2002 and has been working as a lawyer in Leipzig since May 2003 .

Marco Wanderwitz is married and has three children. With his new partner Yvonne Magwas , he became the father of his fourth child in early April 2019.

He is Evangelical Lutheran.

Wanderwitz joined the Junge Union in 1990 and the CDU in 1998. From 1999 to 2012 he was deputy chairman of the CDU district association Chemnitzer Land (from 2009 Zwickau) and has been district chairman in Zwickau since 2012. He is on the boards of the Zwickau Protestant Working Group and the Zwickau Local Political Association .

Wanderwitz has been a member of the city council of the large district town of Hohenstein-Ernstthal since 2004 and of the district council in the district of Zwickau since 2008 . He has been a member of the German Bundestag since 2002 . After initially being deputy chairman from 2002 to 2005, he was elected chairman of the young group in the CDU / CSU parliamentary group in December 2005 . He is also deputy chairman of the German- Portuguese parliamentary group and a member of the board of the CDU / CSU parliamentary group. Wanderwitz was one of the nine members of the Bundestag who sued the Federal Constitutional Court against the compulsory publication of their ancillary income due to the Transparency Act passed in 2005 and failed there.

Marco Wanderwitz moved into the Bundestag in 2002 and 2005 as a directly elected member of the Chemnitzer Land - Stollberg constituency . In the 2005 Bundestag election he received 37.5% of the first votes . He was also a direct candidate for the CDU in the federal constituency of Chemnitz Umland / Erzgebirgskreis II and received 41.2% of the first votes in the 2009 federal election . In the 2013 Bundestag election , he was directly elected in the same constituency with 49.6% of the first votes. Since January 2014 he has been the chairman of the culture and media working group and thus the cultural and media policy spokesman for his parliamentary group. He is a full member of the legal and consumer protection committees as well as culture and media .

In the 2017 federal election he was directly elected in his previous constituency with 35.1% of the first votes. Marco Wanderwitz has been Parliamentary State Secretary at the Federal Minister of the Interior since March 2018. He is responsible for the areas of construction, housing and urban development.

In the context of the financial crisis, Wanderwitz said in an interview entitled “Give her your islands” that Greece could privatize islands “if Greece cannot meet its obligations.” In the summer of 2010, he demanded that people who eat unhealthily have to pay more for health insurance should be used because they would deliberately drive up the costs of the health insurers. These suggestions were described as "ludicrous" in the media. The Green politician Kerstin Andreae suggested to Wanderwitz that Heligoland could also be sold in order to limit Germany's record debt.

Wanderwitz voted in the 2007 vote of the German Bundestag for data retention that was later declared unconstitutional by the Federal Constitutional Court . Wanderwitz described the judgment of the European Court of Justice in April 2014 against data retention as a “holiday for organized crime”. He was heavily criticized on the Internet for this statement.

In March 2014, he recommended that the group of newspaper deliverers be considered separately when structuring the statutory minimum wage . The newspaper publishers incur additional costs of around 225 million euros as a result of the minimum wage for newspaper deliverers. This harms the freedom of the press. A legal opinion by the Westfälische Wilhelms-Universität Münster, which was prepared on behalf of the United Service Union (ver.di), comes to the conclusion that the minimum wage does not endanger the freedom of the press.

In January 2016 Wanderwitz appeared at the right-wing, asylum-hostile association "Heimattreue Niederdorf ". In retrospect, he admitted this as a mistake, according to the Tagesspiegel .