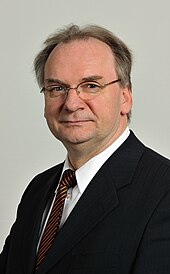 Haseloff's father's family has been recorded in Wittenberg since the 15th century (1423); his mother is a displaced person from Silesia . After graduation in 1972 at the Extended Secondary School "Philipp Melanchthon" in Wittenberg made Haseloff 1972 to 1973 in Halle (Saale) (early release) and from 1979 to 1980 Prora the military service in the NVA from. From 1973 to 1978 he studied physics at the Technical University of Dresden and the Humboldt University of Berlin and graduated as a physicist. He then worked from 1978 to 1990 as a research assistant at the Institute for Environmental Protection in Lutherstadt Wittenberg. In 1991 he received his doctorate as Dr. rer. nat. at the Humboldt University with the work development of measuring devices based on linear laser absorption spectrometry for sensitive molecular gas concentration measurement under the aspect of use in environmental control . From 1992 to 2002 Haseloff was director of the Wittenberg employment office .

Reiner Haseloff has been married to the dentist Gabriele Haseloff , née Eckelt, since 1976 and has two sons and four grandchildren. He has a brother and a sister. He is the first Roman Catholic Prime Minister of Saxony-Anhalt who was born in what is now Saxony-Anhalt. In November 2016 he was elected to the Central Committee of German Catholics . 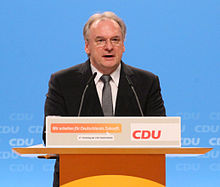 Reiner Haseloff joined the former CDU block party in the GDR in 1976 . He has been a member of the state board of the CDU Saxony-Anhalt since 1990 and was deputy district administrator for the district of Wittenberg from 1990 to 1992 .

From 2004 to 2012 Haseloff was deputy state chairman of the CDU. Since December 2008 he has been a member of the CDU federal executive committee .

Member of the state government

As Minister of Economic Affairs, Haseloff was also subordinate to the State Office for Geology and Mining (LAGB), which has been the focus of an affair over illegal landfills since 2008.

From 2006 to 2011 Haseloff was President of the Network of European Chemical Regions (ECRN).

Before the state elections in 2011 , Böhmer decided not to run for reasons of age. On April 3, 2010, Haseloff was unanimously elected at a state party conference in Peißen as the top candidate for the election on March 20, 2011, and thus as a possible successor to Böhmer in the office of Prime Minister.

On the evening of the election, the losses for the CDU were surprisingly moderate, despite a negative national trend. With 32.5 percent, the party remained by far the strongest political force and provided 41 of the 105 members of the state parliament of Saxony-Anhalt at the time. Haseloff himself achieved 39.9 percent of the first votes in his constituency of Dessau-Roßlau-Wittenberg and thus entered the state parliament for the first time as a directly elected member. Since the SPD (21.5 percent) again performed worse than Die Linke (23.7 percent) and rejected a red-red coalition led by the left-wing top candidate Wulf Gallert , the CDU and SPD agreed to continue the black, who had been in office since 2006 -red coalition .

On March 23, 2011 Haseloff took over the chairmanship of the new CDU parliamentary group and on April 19, 2011 he was elected as the new Prime Minister of Saxony-Anhalt. 57 of 67 members of the CDU / SPD coalition voted for Haseloff. The Haseloff I cabinet was then sworn in in the state parliament. On April 20, 2011, André Schröder was elected as Haseloff's successor in the office of CDU parliamentary group chairman. In the state elections in 2016 , Haseloff was directly re-elected as a member of the state parliament with 32.9% of the first votes in the constituency of Dessau-Roßlau-Wittenberg. In the state elections, the CDU emerged as the strongest force again, but with 29.8 percent and 30 out of 87 seats, it achieved a slightly lower share than before. Since the co-ruling SPD lost a lot of votes, the previous CDU / SPD coalition missed the required majority. Therefore, a coalition agreement between the CDU and the SPD and Bündnis 90 / Die Grünen was negotiated, which was confirmed by all three parties involved on April 23, 2016. Haseloff was re-elected as Prime Minister on April 25, 2016, making him the head of government of the nation's first “ Kenya coalition ”. He was elected in the second ballot with 47 votes after receiving only 41 out of 44 necessary votes in the first ballot.

From 2019 to 2020, Haseloff was a member of the Federal Government's “30 Years of Peaceful Revolution and German Unity ” commission.

On September 21, 2020, Haseloff declared that he would run again as the top candidate of his party in the 2021 state elections.

On December 4, 2020, Haseloff dismissed his Interior Minister Holger Stahlknecht , who was also the state chairman of the CDU Saxony-Anhalt, in connection with the dispute over the radio license . On the same day, Stahlknecht had brought up a possible break in the Kenya coalition and a CDU minority government with the tolerance of the AfD , as different views prevailed within the coalition parties on increasing the radio fee.

In the state elections on June 6, 2021 , the CDU received 37.1% of the vote, 7.3 percentage points more than in the previous election. Haseloff himself won 53.9% of the first votes in his constituency of Wittenberg . A coalition agreement between the CDU and the SPD and the FDP was then negotiated. The three coalition parties had 56 seats in the state parliament. Haseloff was elected Prime Minister of this German coalition on September 16, 2021 . He was elected with 53 votes in the second ballot, after receiving only 48 out of 49 necessary votes in the first ballot.

Cabinet of the State of Saxony-Anhalt

Economics Minister of the State of Saxony-Anhalt

See also : History of Saxony-Anhalt  and the country (GDR)

Presidium of the Christian Democratic Union of Germany