The election for the eighth state parliament of Saxony-Anhalt took place on June 6, 2021.

The CDU around Prime Minister Reiner Haseloff won the election with a significant increase in votes. The gap to the second-placed AfD increased significantly from over 5 to over 16 percentage points compared to the 2016 election . The AfD lost votes for the first time in an eastern German state in a state election.

The clearest loser in the election was Die Linke , which had to accept its worst result so far in Saxony-Anhalt. The SPD also lost, losing 2.2 percentage points. The FDP managed to re-enter the state parliament after ten years, the Greens were able to improve slightly, but remained the smallest parliamentary group.

On the day after the election, the FDP and the Greens declared that they would not join a coalition with the CDU and SPD as third partners, which together already achieve a majority in the state parliament.

According to Article 43 of the state constitution, the state elections take place at the earliest in the 58th and at the latest in the 62nd month after the beginning of the electoral term. The electoral period of the state parliament elected on March 13, 2016 began with its first session on April 12, 2016.

In November 2019, with the votes of the government factions of the CDU, SPD and Greens, the state parliament set June 6, 2021 as the election date, the last Sunday within the constitutional deadline. The late date was justified with the weather. In addition to the opposition factions, the taxpayers' association also criticized the date because it would lead to advantages for members of parliament in terms of retirement benefits.

The number of Landtag electoral districts in Saxony-Anhalt was reduced from 43 to 41, the minimum number of MPs thereby fell from 87 to 83. The Landtag can, however, increase through overhang and compensatory mandates .

Each voter has two votes: The first vote is used to elect a member of each constituency. With the second vote , which is decisive for the allocation of seats in the state parliament , the state list of a party is elected.

The seats are calculated using the Hare-Niemeyer method .

The 2016 election was dominated by the AfD party , which was standing for the first time and immediately received 24.3 percent of the vote and became the second strongest party. The CDU was after slight losses strongest party with about 30 percent. The left and the SPD were the clear losers , with only 16.3 and 10.6 percent respectively. The Greens again made it into parliament with 5.2 percent, while the FDP just missed it with 4.9 percent.

After the election, the CDU, SPD and the Greens formed Germany's first “ Kenya coalition ”. Reiner Haseloff (CDU) was re-elected Prime Minister and head of the state government . In parliament, the government has a narrow majority with 46 of the 87 seats.

Parties could submit nominations until April 19, 2021. Parties that are not represented in the state parliament or with a representative elected in Saxony-Anhalt in the German Bundestag must provide support signatures. Due to the COVID-19 pandemic , the minimum number has been reduced significantly - from 1000 to 300 for state nominations and from 100 to 30 for district nominations.

Associations that are not represented by their own nomination in the state parliament or that did not participate in the 2017 federal election in Saxony-Anhalt with a state list had to report their participation by April 6, 2020; the state election committee decided on their party status.

According to the polls, the six largest parties are running with the following top candidates:

The national election proposals of the following 22 parties were approved (in the order as on the ballot papers):

Coalition statements before the election

The continuation of the previous so-called “ Kenya coalition ” made up of the CDU, SPD and the Greens was generally seen as a possible option by all those involved. A so-called “ Germany coalition ” made up of the CDU, SPD and FDP was also up for debate. Leading CDU politicians favored this alliance over a coalition with the Greens. All other parties continued to exclude cooperation with the AfD. In the course of the legislative period, individual CDU members sometimes suggested rapprochement with the AfD, but these were barely audible in the end. The CDU ruled out a coalition with the left. 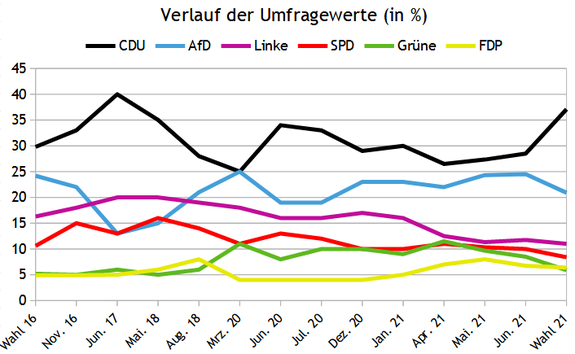 Survey values ​​averaged over monthly survey results, from the 2016 election to the 2021 election

The values ​​of the surveys reflect the opinion of the respondents as to which of the surveyed coalitions they rate as good or bad. The missing values ​​for 100% did not provide any information.

The values ​​of the surveys reflect the opinion of the respondents as to which party should be part of a new state government. The missing values ​​for 100% did not provide any information.

For the elected MPs, see the list of members of the State Parliament of Saxony-Anhalt (8th electoral term) .

Results in the urban and rural districts

The CDU won 40 of the 41 direct mandates. The AfD was only able to hold one of the 15 direct mandates it won in 2016 , the one in Zeitz . The Left also lost its only direct mandate in Köthen , which it had acquired in 2016 . Prime Minister Reiner Haseloff was the only candidate to win the direct mandate with an absolute majority , 53.9% in the Wittenberg state electoral district .

The day after the election, the CDU announced that it would hold exploratory talks with the SPD, FDP and the Greens for a possible coalition. On the evening of the election, several CDU politicians had spoken out in favor of including the FDP in the coalition. The Greens rejected a new edition of the Kenya coalition. The FDP also ruled out a coalition with the CDU and SPD because of the narrow majority. Two days later, however, the FDP rowed back and declared that it was open to exploring a so-called Germany coalition with the CDU and the SPD.

The CDU, SPD and FDP announced on July 7, 2021 that they wanted to enter into coalition negotiations and thus aim for a German coalition.

Elections to the state parliament of Saxony-Anhalt