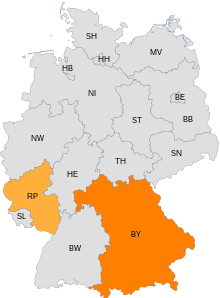 Countries where the Free Voters are in the state parliament

Free Voters (own spelling: FREIE WÄHLER) is a political party in Germany . To distinguish it from other organizations of the same name, it is also referred to as the Federal Association of Free Voters .

The federal association was founded in February 2010. It emerged from the middle of the Federal Association of Free Voters , an umbrella organization of municipal voter groups , and is closely interlinked with it in terms of personnel. Their orientation is described as liberal - conservative , centrist and value-conservative , with a focus on the expansion of local self-government and an orientation on factual political issues, independent of ideological interests, is sought.

BVB/Freie Wahler , which is represented in the Brandenburg state parliament , does not belong to the Freie Wahler party, but cooperates with it. The party says it has around 5,700 members (as of December 2019).

Among other things, the party wants strengthen local self-government . One of the reasons given for running for elections at state and federal level is that state and federal politics "erodes" the autonomy of the municipalities . The party, on the other hand, is in favor of municipalities having their own financial sovereignty. At European level, the party is demanding that the European Committee of the Regions should be given a permanent seat in Parliament.

The party fears that the European Union will develop into a "debt union" or "inflation union". The previous euro policy had failed. At the same time, Free Voters call for a deepening of the EU only with a fundamental democratization in the sense of citizens' interests - "no Europe of bureaucrats, but a Europe of the citizens".

The party also calls for the promotion of regional economic cycles. A sustainable budgetary policy is sought. Banking supervision is to be tightened. Renewable and environmentally friendly technologies should be promoted. Rural areas are to be strengthened by so-called infrastructure measures.

Direct democracy, party
state The party campaigned for citizen participation and referendums at federal level. The Federal President and Prime Minister are to be elected directly. The Free Voters see the current party democracy critically. In the party's view, the influence of the parties should be limited. The influence of lobby groups should also be curbed. The Free Voters reject rigid lists in elections.

Education
The party calls for the framework competence for the education system to be transferred to the federal level.

Refugee
policy The Free Voters support an immigration policy based on the Canadian model . They demand that family reunification for asylum seekers be limited and they want to create return assistance. Anchor centers and the Bavarian State Office for Asylum reject them. At the same time, the party is demanding more benefits in kind rather than cash and is in favor of cutting benefits for refugees who do not integrate.

Domestic policy
They also call for consistent action against organized crime and “exhaustion of the penal framework”. Police and judiciary are to be strengthened and modernized in terms of personnel.

The Free Voters are open to legalizing cannabis. The party also proposes a drug driver's license, which can be used to buy cannabis, for example.

In the 1950s, the first state associations of local free voter groups emerged. The Federal Association of Free Voters was founded in 1965. Over the years, individual state associations have repeatedly contested state elections without much success.

In the 1998 state elections , the Free Voters of Bavaria decided to stand as a candidate. Running in the state elections was controversial internally and was rejected by some district associations. The Free Voters, according to the criticism, would thereby leave their actual municipal field of activity. According to the party law, they would also acquire the character of a party by participating in the state elections. The organized voter group Freie Wahler Bayern e. V. (FW voters' group) founded. At the first election, she immediately reached 3.7%. In 2003 it improved slightly to 4.0%.

Entry into the Bavarian state parliament and first European elections

Finally, in the Bavarian state elections in 2008 , the Free Voters won 10.2% of the seats in the state parliament, where they form the third largest fraction. In the state elections on September 15, 2013, FREIE WÄHLER were the first new group to gain seats in the Bavarian state parliament in over 30 years, where they are again the third strongest party with 9%.

After the success of the Bavarian Free Voters in the 2008 state elections, the Federal Association of Free Voters decided to compete nationwide for the elections to the European Parliament on June 7, 2009 . The decision was controversial within the federal association, the state association of Baden-Württemberg even resigned from the federal association as a result of the decision. On January 24, 2009, the federal electoral group Freie Wahler was founded in Würzburg for the candidacy. The top candidate was Gabriele Pauli . The Free Voters received 442,579 votes, which was 1.7% of the valid votes. This made Freie Wahler the most successful grouping of those parties that remained below the 5 percent hurdle.

On February 20, 2010, this federal voter group was transferred to the Federal Association of FREIE WÄHLER . The national association is closely interlinked with the national association in terms of personnel. The federal chairman is Hubert Aiwanger, who is also chairman of the federal association, the Bavarian state association, the Bavarian voter group and chairman of the parliamentary group of the free voters in the Bavarian state parliament. Based on the results of the European elections in Germany in 2009 , the Federal Association of Free Voters has been entitled to state party funding since 2009; for 2010, an amount of EUR 79,850.41 was set.

In July 2012, the party appeared for the first time in the nationwide surveys of the major opinion research institutes. YouGov and GMS predicted two percent of the vote for the party.

In 2012, the federal association worked together with Wahlalternative 2013 , which was founded by CDU circles . In the state elections in Lower Saxony in 2013 , Bernd Lucke from Wahlalternative was one of the candidates on the list of free voters. The election was disappointing with a result of 1.1% for the party. As a result, the cooperation was terminated by the Wahlalternative 2013. Three state chairmen switched to the Alternative for Germany party , which had been founded by Wahlalternative. In addition, the Saarland state board resigned as a whole.

The party ran for the first time in the Bundestag elections on September 22, 2013 and achieved 1%. The lawyer and financial economist Stephan Werhahn, a grandson of Konrad Adenauer , was nominated by acclamation as the designated top candidate . Werhahn, born in 1953, left the CDU after 40 years of membership due to its euro rescue policy. On March 27, 2013, Werhahn announced that he wanted to return to the CDU because he "can no longer support the current developments in the party [Free Voters] with a clear conscience".

Before the approval deadlines, the party had founded state associations in all the missing federal states or merged with existing associations and occupied the executive boards again, in which gaps had been left by conversions to the AfD . After the withdrawal of Stephan Werhahn, a nationwide "top candidate" was dispensed with. State lists were drawn up in all 16 federal states, all of which were approved by the federal electoral committee on August 1, 2013. Otherwise, 9 (plus the Union with two parties) of the 39 admitted parties succeeded, of which 30 ultimately competed with at least one state list.

Entry into the European Parliament

At the federal members' meeting in Erfurt on January 12, 2014, Ulrike Müller , member of the Bavarian state parliament, became the top candidate for the European elections on May 25, 2014. On February 28, 2014, Müller and the deputy federal chairwoman Gabi Schmidt were elected in Brussels as individual members of the European Democratic Party ( EDP) included.

After her successful election, Müller announced the cooperation between the FW and the EDP. The Free Voters became a member of this association on October 22, 2015.

In her first mandate from 2014 to 2019, Ulrike Müller joined the ALDE parliamentary group. Since her re-election in May 2019, she has been the spokeswoman on agricultural policy in the Renew Europe group (successor to the ALDE group).

In May 2017, MP Arne Gericke , who was elected for the Family Party , indicated that he would leave his party and join the Free Voters. In October 2018 he left the Free Voters again and switched to Bündnis C.

Government participation in Bavaria from 2018 and subsequent state elections

In the Bavarian state elections in 2018 , the Free Voters again gained a share of the vote. As a result, they formed a coalition government with the CSU for the first time. The federal chairman Aiwanger became deputy prime minister.

In the Hessian state election two weeks later, the party achieved its best result in a state election outside of Bavaria with 3.0%. On November 13, 2018, the FW-Landesvereinigung Mecklenburg-Vorpommern and the Bürger für Mecklenburg-Vorpommern (BMV), a spin-off from the AfD, announced their intention to merge. Three of the four members of the BMV state parliament joined the Free Voters. The previous BMV parliamentary group was renamed Freie Wahler/BMV. At the end of September 2019, however, the members of the state parliament resigned after disputes with the state chairman Graf von Westarp, and the parliamentary group dissolved.

The citizens' alliance of free voters e. V. was founded in 1993 by members of the people's movements at the time of reunification , including the New Forum , who had not joined the Bündnis 90/Die Grünen coalition ; prominent founding member was u. a. the later Brandenburg Prime Minister Matthias Platzeck . In 2009 the name was changed to Landesverband Freie Wahler Brandenburg e. V. After a lawsuit by the State Association of Free Voters , the association was forbidden by a court to use this name. On May 19, 2011, the Free Voters Association of Brandenburg was founded in Potsdam from the Citizens' Alliance of Free Voters.

The state association in Hamburg was founded on October 30, 2010 and took part in the 2011 citizenship and district assembly elections as well as in the 2013 federal election. With the dissolution of the FW Freie Wahler Hamburg e. V. , his assets passed to the state association.

In the 2017 state elections , the Free Voters took part across the board and achieved 0.4% of the second votes, less than half as many as five years earlier.

State associations of the Federal Association of Free Voters